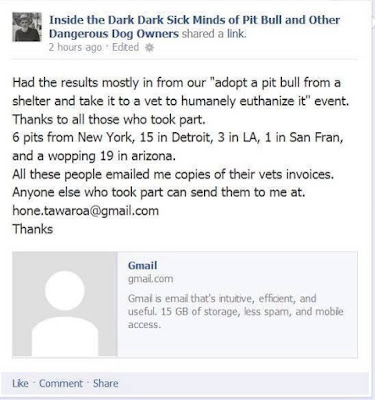 Pit bull hate bloggers Merritt Clifton and Beth Clifton join the imediaethics and Amsterdog effort to spread their lie-filled non-factual hate blog all over the internet.

Clifton stumbles across the facts like a drunken blind guy looking for a hate party, even calling a Great Pyrenees a pit bull. This is only one of the atrocious and outright lies in his hate-filled animals 24/7 blog supported by groups who actually adopt pit bulls from shelters and have them killed. (see photo).

Imedia and followers have claimed to have insiders at Facebook which are being used to obstruct and block Facebook accounts that belong to anyone who questions the inaccuracies in the imedia piece which has headlined their business website for weeks and beating out unimportant news items like Trump and the Republican debates, Al Jazeera and even the super bowl.

Clifton and his wife are spreading their blog which illegally contains photographs and intellectual copyrighted materials belonging to Cindy Marabito and American Pit Bull ExaminR. A DMCA takedown notice has been publicly issued to law-breakers Merritt and Beth Clifton which was immediately removed:

Beth and Merritt Clifton (who calls herself and adopter and rescuer, but killed her own dog) raise money to fund their cause geared to challenge the first amendment rights belonging to those of us who tell the truth about hate groups and pit bull kill groups.

The list of so-called pit bull advocates lashing out side by side against American Pit Bull Examiner with known pit bull hate groups who want all pit bulls dead and publish false dog bite statistics seems to grow by the viral minute.

Please share and sign this petition so that the New York Times, New York Post, NY governor and NYC mayor will be made aware of the atrocities surrounding the NYC shelter system where animals are killed 365 days a year.

APBE wrote a story about two dogs in jeopardy and imediaethics wrote a lie filled blog and threatened examiner.com until thousands of life-saving articles were removed. Looks like the hate groups are winning and more dogs will die.

BELOW: debunking a few of the outright lies in Merritt and Beth Clifton's hate piece:

"Marabito in her American Pit Bull Examiner postings indicated that at least one dog who died at Spindletop had been transferred to Purcell from Reunion Rescue."

----Stella was boarded at Spindletop…not transferred.

"Marabito never identified her purported multiple sources.  No on-the-record source and no other source who verifiably visited the scene even mentioned that a ladder was present.  Napora’s stepfather,  Darold Larson of Yakima,  Washington,  has repeatedly rebutted the claim that a ladder was involved.  The San Mateo County coroner’s report found that Gunner was solely responsible for the fatal attack on Napora."

--San Mateo Coroner’s report never released. Darla Napora’s father Doug Robinson hadn’t seen his daughter in two years since married to Greg Napora. The ladder was built in and is still located on property. Landlord approached by Napora one year after Darla Napora’s death in effort to seek restitution re: ladder.

"In May 2015,  Marabito was by her own account temporarily blocked from using Facebook,  banned from the premises of Austin Animal Services,  and threatened with arrest in May 2015,  after one of the pit bulls in her custody escaped from Reunion Rescue and was impounded."

----LuLu is a Great Pyrenees. Seems the pit bull haters like Merritt Clifton are so blinded by hatred, they can't tell one dog from another.

Marabito’s account “claimed that Skye and Milo,  allegedly two sibling pit bulls, were about to be killed at a Harlem animal control center.  There was only one problem with this sensational story,  published on a site where writers are paid by the number of clicks:  It wasn’t true,”  Kausch and Shearer summarized.  “Five hours before the story was posted,  Skye had already been adopted and was safe and secure in her new home.”

doggirlpitbull@blogspot…Pit Bull is not capitalized. If you’re going to write hate blogs about pit bulls, learn to spell the term.
Posted by Pit Bulls and Other Animals at 4:44 AM