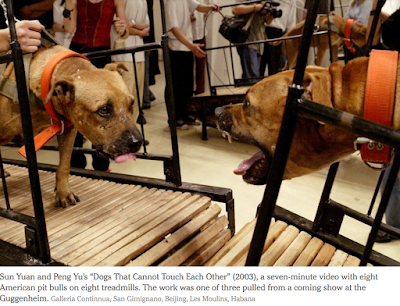 Thanks to animal lovers like you and me, the Guggenheim Museum has taken down the horrible art from China featuring fighting pit bulls. According to a New York Times piece, "Facing an avalanche of criticism, the Guggenheim surrendered late Monday and said it would remove three major works from a highly anticipated exhibition of art by Chinese conceptual artists, including the signature piece of the show, which opens next month."

The featured 'art' piece involved 8 American pit bulls attached to treadmills in a 7-minute video straining and salivating, but only able to keep running on the antiquated machinery. The visual is horrific and beyond what most cultured people consider to be 'art.' Imagine watching a train wreck for 7 minutes, or perhaps the bombing of the World Trade Center over and over. This is cruelty, pure and simple.

The New York Times reports, "the museum, in Manhattan, made the decision after it had come under unrelenting pressure from animal-rights supporters and critics over works in the exhibition, “Art and China After 1989: Theater of the World.” Protesters marched outside the museum over the weekend, and an online petition demanding “cruelty-free exhibits” at the Guggenheim had been signed by more than half a million people as of Monday night.

The three works, which all involve animals, are “Dogs That Cannot Touch Each Other,” “Theater of

The 'art' in question, 'Dogs that Cannot Touch Each Other,' is called 'pugnacious' by its creator, Peng Yu with her husband, Sun Yuan. She denies that her 'art' is cruelty." 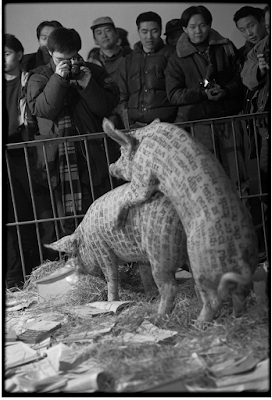 the World” and “A Case Study of Transference.” The pieces were among about 150 works selected for the show, mostly experimental art and many of them shocking, intended to challenge authority and use animals, in video, to call attention to the violence of humankind."

“These dogs are naturally pugnacious,” Ms. Peng said in an interview last year.
Reached in Beijing on Tuesday, Ms. Peng blamed the controversy on a recent article about the exhibition. “I don’t want to talk about this anymore,” she said, adding that the dogs were examined by veterinarians before and after they were used in the performance."

The very idea that this person is allowed to handle innocent animals is beyond comprehension. The comments reflect a complete lack of dog knowledge. But even more, the display reflects of the desire to cause pain and discomfort by this artist.

The museum said the works were being removed “out of concern for the safety of its staff, visitors and participating artists.” The Guggenheim has claimed to have received threats of violence, yet "A museum spokeswoman, asked to describe any threats or security issues, including whether the police had been notified, declined to discuss specifics."

Animal lovers from around the world objected to the exhibit in which three pieces were pulled by the Guggenheim including one of two pigs forced to mate for the crowd with their bodies completely covered in markings. Another featured live insects and reptiles under a bright light. 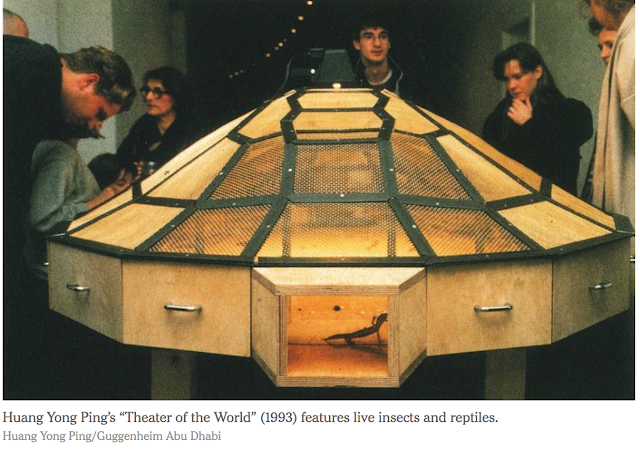 Posted by Pit Bulls and Other Animals at 5:52 AM No comments:

Houston SPCA must return Harvey dogs to Beaumont by law 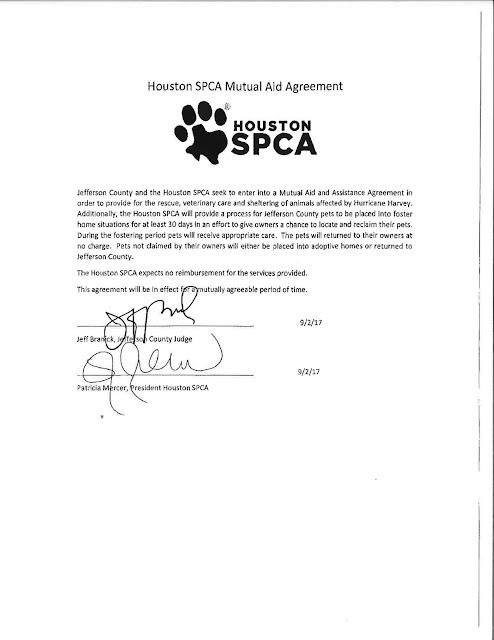 The Houston SPCA signed an agreement to return all dogs to Jefferson County. Bett Sundermeyer and No Kill Houston have provided the following information reprinted here in Pit Bulls and Other Animals.

When the Houston SPCA, a kill shelter, took animals from the Ford Center in Beaumont after Hurricane Harvey, and forced rescuers to leave, A LOT of people were understandably upset and worried about the animals.

We are all particularly worried about Pit Bull type dogs that the HSPCA took because they have said that they do NOT adopt out these dogs --- meaning they kill those dogs.

This agreement says that the Houston SPCA will:

1) Place Jefferson County pets into foster homes for at least 30 days in an effort to give owners a chance to locate and reclaim their pets; and

2) Jefferson County pets will be returned to their owners at no charge; and

These dogs must be RETURNED to Jefferson County.

No Kill Houston is a longtime animal advocacy group working hard to protect Houston's companion pets. The section regarding the Houston SPCA has documented the routine killing of countless innocent animals at the hands of the Houston SPCA.

Please sign and share this petition to fire Patti Mercer and investigate the Houston SPCA.
Posted by Pit Bulls and Other Animals at 4:45 AM 3 comments: