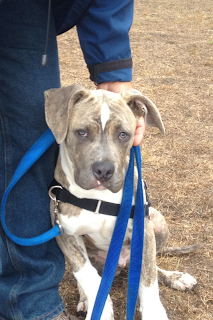 Yesterday, Reunion Rescue received an urgent call from a young man in the peninsula near San Francisco. He'd found a puppy running loose in Pacifica and took the puppy to Peninsula Humane Society.

After hearing some stories from other locals about the strict assessment tests and euthanasia rates for pit bulls at PHS, he went back to the facility and got the puppy. He was told by PHS if the puppy did not pass their battery of assessment tests, the puppy could be euthanized.

Several articles have been written about Peninsula Humane Society regarding pit bull euthanasia practices. Reunion stepped up for this puppy and we are now trying to raise donations to take care of his vetting and neutering so he can enter our foster program.

The young man agreed to keep him overnight while Reunion Rescue networks for a foster home and makes arrangements for his neuter surgery. Please share this one's story and consider a small donation to help us care for him.

As soon as this one seemed to have a plan in place, we got another late night call. A gentleman in San Francisco telephoned asking for help. He's been left with an abandoned pit bull puppy. He was getting ready to take the puppy thought to be about four months old to San Francisco Animal Care and Control. SFACC has a longstanding career of euthanizing pit bulls.

Reunion Rescue has spent years trying to save pit bulls from this facility after having been banned in 2003. We have been able to save many like Allie, Faris, Buddy, Wylie, Maddie, Slappy, Ollie and tons of others scheduled to die at SFACC, but need help. Every dog we've saved before the ban was taken from SFACC death row and about to be euthanized.

Since Reunion Rescue's 2003 ban, we've had to rely on the help of finders and private citizens to save the lives of San Francisco dogs condemned to die at SFACC. Reunion Rescue depends solely on private donations to save lives. We need your support to continue this work.

Please share these two puppies' stories and consider a donation to help us save them and so many others.

Visit http:www.reunionrescue.com and click the donate button. We need funding to vet and neuter these puppies so they can join us in our San Francisco Strut Your Mutt event Saturday the 21st on Treasure Island.

Please join the puppies and Reunion Rescue in our walk for homeless pets everywhere. You can create a virtual walk for only $10 to help these and other dogs should you and your pet not be able to attend.

We will be creating a Facebook page for the puppies with updates and photos, so keep tuned in for details.

Posted by Pit Bulls and Other Animals at 7:02 AM No comments:

150 animals in jeopardy when Texas shelter closes its doors 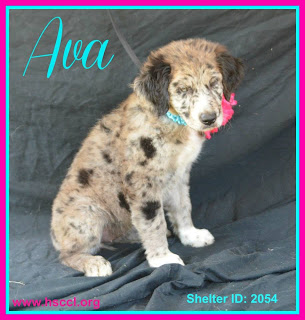 The Humane Society of Cedar Creek Lake is being forced to consider closing it’s doors, after 30 years of serving the surrounding community, and saving thousands and thousands of lives, due to lack of funding.  We had requested increases in our contracts from Henderson and Kaufman Counties and both requests were denied.  Over the last two years, we have seen private donations dramatically decrease and our fund raising efforts have not kept up with the demand on our cash flow.

We currently have funds to see us through the next 3 weeks.  If we can not find a long term solution in that time, we will be forced to close our doors to the 3500 to 4000 homeless pets that we care for every year thus putting there lives in jeopardy.

We are now immediately reaching out to the rescue 150 animals that are still in our custody, when we are forced to close the doors, will have to be euthanized.  We certainly hope that we do not have to close our doors.  But it is a very real possibility.  And we want to be proactive in getting as many pet as possible into a safe alternative. 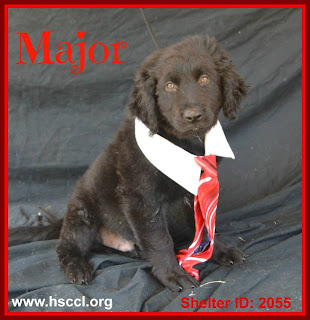 community that has helped us for so long to begin pulling these pets to reduce our population as much as possible.  The approximately

I know all rescues are full.  I reach out to rescues everyday in an effort to save the lives of HSCCL’s homeless pets.  But if anyone can help with just one pet, it is one life saved.  Please review our PetFinder And Adopt A Pet page.

If you have any questions, please email me at dogshshccl@yahoo.com. 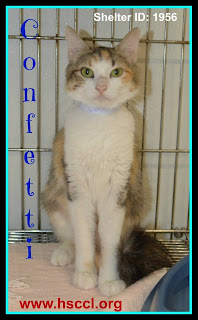 For those of you that live in Henderson and Kaufman Counties and are wondering where your animals will be going after out gate shuts for the final time, I suggest you call Judge Wood’s office in Kaufman County at 972 932-4331 or Judge Sanders’ office in Henderson County at 903 675-6120.  Not only did they decline contract increases, but also declined emergency funding to help keep us open until a long term solution could be found. 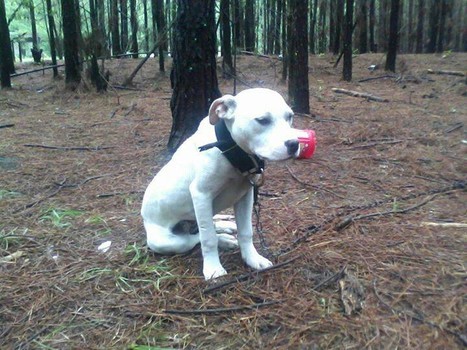 Petal, Mississippi: The following story was written about Nina, a chained pit bull in wooded terrain outside Petal, Mississippi on July 23. Only one comment has been published regarding Nina's wellbeing, but the information is suspicious.

In light of the horrible abuse sweeping the nation, care by some third party is not comforting.

I placed another call today with Purvis County Sheriff's Department at 601-544-7800 only to get the same story, that Nina is in the care of some third party. If this third party is responsible for the chain around Nina's neck, then something certainly must be done.

I asked the sheriff's department to call J. R. Reynolds again and left my phone number so that we can attempt to trace Nina's whereabouts.

Nina is safe with some third party. If this is fact, where are photos of Nina off the chain and in her safe new whereabouts?

Nina is the beloved pet of J.R. Reynolds. She was stolen from his home over a week ago. Mr. Reynolds received a text on his cell phone of his beautiful dog on a tow chain somewhere in the woods.

Facebook groups are posting Nina's picture everywhere in hopes that someone recognizes the terrain and will turn in the evil criminal who stole Nina.

The photograph of a terrified Nina inspires dreadful thoughts. Concerned animal welfare advocates are fearful Nina will live on this chain the rest of her life or is being used in the nasty sport of hog hunting...or even a worse fate.

According to WDAM News, Nina is only 7 months old. She was stolen from her outdoor pen, which is yet another testament to not letting your pet outside without direct supervision.

What kind of monster steals a puppy and sends the photograph to the owner?

According to the article, local police are involved, but a call to both Petal Police Department and the County office provided no information:

Again, it appears that justice will come from Facebook posts and social media outreach.

Please continue to share Nina's story in hopes that she is returned to her family and in hopes that her family will bring their pet indoors with the rest of the family.
Posted by Pit Bulls and Other Animals at 8:43 AM 2 comments: