Sometimes the world gets spinning too fast and we forget how to stop and enjoy what is important. With all of the emails and calls daily about animals in distress, it's easy to get caught up in the high drama of life and death.

About a month ago, Girl, our 14 year old pittie who came from San Francisco ACC death row and started Reunion Rescue as we know it, got very sick. Her right eye began to bulge from the socket and several other things seemed to happen all at once. Girl's legs gave out and she began to urinate in the house.

All of this occurred over Memorial Day weekend and the option was the emergency room. To a longtime rescue and home who feeds raw and treats homeopathically, emergency care was not a good idea. Over the years, we've resorted to emergency room care and have lived to regret it every single time.

Instead, an emergency call was placed to Girl's homeopathic vet and a call left at the veterinary opthamologist we trust. Unfortunately, we reside in Austin, Texas...home to the biggest vet scam in the country. More on that in a bit.

Luckily, for Girl, Dr. Falconer returned our call immediately. He suggested a remedy which turned out to be perfect for her constitution. The immobility and incontinence stopped immediately. I'd been giving her pain pills and she no longer needed them. The opthamologist, Dr. Shifrin, fit her in that Tuesday and prescribed some eye drops.

Talking to several neighbors and acquaintances over the past few weeks, I'm amazed at the local vets who suggested 'humane euthanasia' for the same sorts of symptoms experienced by Girl. I am apalled that this sort of practice not only goes on, but that people actually allow these vets to put their dogs and cats to sleep based on a routine office visit opinion.

If I've heard it once, I've heard it a thousand times coming from sorrowful owners being told by their vet, 'well, he lived a good life to be 11 or so years old.' What? 11 is not a good long life. This is coming from the mouth of someone who injects your pet with horrible elements like mercury, toxic poisons, formaldehyde, rabies and God knows what else in these yearly vaccinations. If your pet is five seconds late, they send you a helpful reminder that your pet is overdue for yearly vaccines, lyme disease injections, toxic flea medications, poisonous parasite preventatives and so on. 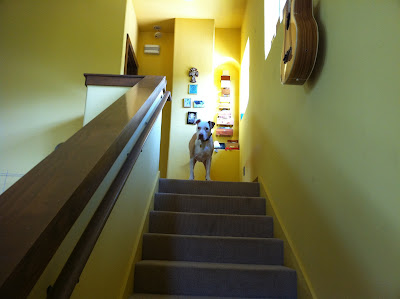 No wonder our pets are being euthanized at 11! I'm amazed they made it that long, especially when they're fed the nasty Science Diet products conveniently sold in the vet office. By the way, vet schools are underwritten by Hills, the company who makes the pet food and also own the largest rendering plant in the United States where shelter killed pets are ground up and made into pet food. How convenient. Does the word 'racket' start to sound sickeningly familiar?

During the time Girl was experiencing her issues, Martha, one of our sanctuary cats began to fail. Martha is 14 and has always suffered from ear and eye issues. According to conventional vets, she's had everything from herpes virus to yeast infection to corn allergy. Her biggest problem was over-vaccination before she came to us.

A large tumor like growth appeared on the side of her face. While dealing with Girl, I mistakenly decided to go 'conventional' and take Martha to the first vet she'd seen when she was at the PetSmart rescue, Barton Creek Animal Clinic.

$600 later and three weeks of harmful antibiotics later, the vet suggested Martha undergo a complete ear canal removal operation or also known in their industry as TECA, total ear canal ablation. I began to call around Austin and was quickly reminded of the racket going on in this town. You're talking to a person who started rescuing in San Francisco and the bay area has nothing on Austin. I was amazed at the prices. At least in SF, you can find a vet who is rescue friendly and wants to help animals. That ain't happening here...not by a long shot.

Cut to Heart of Texas in Round Rock. I got through to a very nice sounding vet who offered to help. He went on to say how many animals he saves at both Austin Pets Alive and Williamson Animal Shelter. That Monday, I cleared my calendar and drove Martha to see team member Sunil Vansanjee at Heart of Texas Veterinary Specialty Center in Round Rock. He'd quoted us $2K for the operation and would offer us a substantial rescue discount.

After what took the better part of four hours, he had his assistant present us an estimate over 4 thousand dollars. What? How am I going to raise that kind of money? It is virtually impossible. Had I been told the truth, I would never have wasted his time or mine and certainly not put Martha through the stress of a four hour drive and vet prod.

I could have spent that four hours writing a couple of articles for the Examiner to help other animals in distress with the wasted time spent at this vet. I couldn't help but think of all of the poor slobs like me who'd fallen into the clutches of these greedy vets. How many animals are dumped at shelters to die because some money hungry vet issues a bloated appraisal for their pet's care?

Opting to cry later, I knew what I must do. I realized I'd erred by trying to go conventional. I put in a call to Dr. Falconer fully knowing he would have so much to undo. He was lovely as usual. If anyone out there has ever spoken to their vet or even family doctor in holistic terms and experienced the eyes glazing over, you'll know what I'm talking about. It was so wonderful to speak to Dr. F and talk about Martha's ears and eyes and whole body being connected.

The issue in her inner ear whether it be polyps or a tumor; the eyes whether herpes virus or a flare up in conjunction with all her other maladies, her coat, her temperament, her general well or ill being all were treated with care and interest by Dr. Falconer. I could finally relate Martha's issues to someone who actually acted and thought like a doctor! I'd found intelligent life in the universe. Oboy!

After hearing all of Martha's issues, symptoms, likes, dislikes, past and present, I could almost feel the light bulb go bright when Dr. F decided what remedy to use. I cannot express how wonderful that feels to an animal lover. The illumination one experiences when dealing with the science of homeopathy is earth shaking and astounding.

When Dr. F described what the remedy would do and what to look for, I had some hope and some trust for the first time in a long time. Isn't that what doctors are supposed to do, heal? I had been so disappointed and let down. Nothing is more sad than not being able to care for those who've been placed in your care. 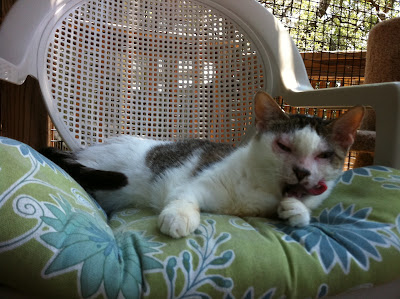 My philosophy is that we are granted God's greatest treasure to care-take. Anyone who's ever cracked open the bible reads the story of creation and how mammals and fish and fowl were all formed and then, man, to care for them. Whether anyone believes in God or not, it's an amazing story and one that I hold near.

Today, I feel kind of blessed. At least two who've been placed into my care are having good days today. Girl might not live forever, but she is pain free and enjoying being alive. Martha hasn't even started her remedy yet, but she already seems to know it's on it's way. She got up this morning and went outside to the enclosure to lay in the sunshine with the other kitties...something she has not done in a long, long time.

Live Chat Software
Posted by Pit Bulls and Other Animals at 11:06 AM No comments: