Sometimes the rescuers are scarier than scary shelters

The other day, I got one of the many mass alert emails I receive on a daily basis. This one was directed at raising $1,000 to pay some rescuer who was p.o.'ed about being promised $1K to take a dog and hadn't received the money yet. She went off on the whole group who'd initially been emailed to help with expenses.

Supposedly the dog had experienced bloody diarrhea and had to be taken to the vet. Anyone familiar with rabies vaccinosis knows that bloody diarrhea is a symptom of over-vaccination. Anyone with a computer can easily Google rabies vaccinosis or over-vaccination and diarrhea which will bring up multiple scientifically researched studies along with case studies from people whose pets have suffered and even died from over vaccination. Even the protocol from vet offices warns about the dangers of vaccination.

I felt it my duty to suggest the dog might be suffering from rabies vaccinosis only to receive a rabid reply from a fellow rescuer. It was quite frightening to say the least. The woman, whose name seemed familiar, was very angry at my information about over-vaccination. In fact, she literally said rabies vaccinosis is bullshit. 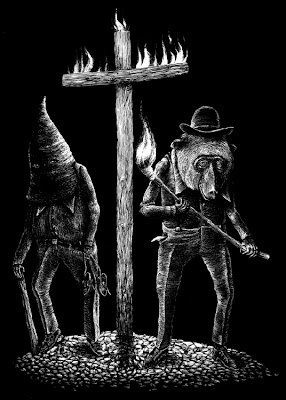 I come from the south and am more than familiar with ignorance, but you expect a little more from the great state of California and especially from someone who very proudly works as a vet tech. Oh, Lord, save me from most of these vet techs and especially when they rescue pit pulls. Even if they only have three in the stable.

I wrote back to suggest she read my book, Pit Bull Nation, namely the Raspberry chapter, where I tell the story of a dog who I witnessed with my own eyes develop an immediate and horrific case of rabies vaccinosis.

She went on to state that she'd had this conversation with me in the past and believes what she hears from the veterinarians. I guess she doesn't believe vets who write scholarly reports about intensive studies done to substantiate their work.

As one recent article posed, the very term rabies vaccinosis is becoming quite common. More and more people have witnessed their pets' reactions to vaccination with symptoms such as ADHD-like tendencies, aggression, seizures, chronic distemper, chronic parvo and chronic rabies.


According to recent editions of the Senior Dogs Project newsletter, all twenty seven of the nation's vet schools in North America are in the process of changing their vaccine protocol.

I looked back through my emails for the conversation this lady claimed to have shared with me. I found the couple of sentences she was referring to. A woman who works at a shelter had written in about an owner surrender dog who'd allegedly bitten someone. She wanted to ask for help with the dog whom she'd grown to care about.


I suggested the Reunion Rescue detox protocol as aggression is now thought to be related to over-vaccination, even a single dose. The rescuer-vet tech whose rescue, by the way, is yet another one of these rescues more about advocacy rather than rescuing...actually recommended euthanizing the dog. This is what you call advocacy? You're going to kill a dog you've never laid eyes on? Never temperament tested? Never even looked at an incident report? You call this rescue?


Now, I understand why she only has three rescue dogs....I don't even want to know what she does with the rest. Too dang scary.


All I can do is continue to learn and continue to try and do the real outreach work. To share my experiences detoxing and rehabbing and yes, rescuing the dogs this woman would kill.


The scary award for the day goes to this scary lady...you do not want to learn, but yet you call yourself an advocate. You over-vaccinate as a job and then kill the animals who become sick as a result.


I doubt this lady will ever read this blog, but on the off chance she might like to learn something, here are some well researched articles about that rabies vaccinosis 'bullshit' she was referring to.

Live Chat Software
Posted by Pit Bulls and Other Animals at 6:56 PM 1 comment:

Another tired day and a lesson for Cindy

I just got through walking with Pip and a potential new owner. I could tell, though, by the time we got to Broken Bow, might as well just turn around. I hate that feeling. When you know, I know and the dog knows that it's a no go. Pip is such an awesome dog. She is the perfect companion. Loves people, loves kids, just not so hot for all other dogs. Oh, well.

It was a beautiful walk and Pip got to go twice today..that's 6 miles. She'll sleep good tonight. I love her and she's always got a place here. Always. It's just a shame for the ones I could be saving who will be stuck in boarding somewhere while waiting for their forever homes or a solid foster.

I woke up to bad news. I probably needed the 6 miles today more than Pip. It's good to beat the trail for a couple of hours when you're feeling blue. Eyes on the prize and the sky, bluer than blue. It is all going to be ok.

I'll start with the worst which turned out to be the best. A dog showed up at the little shelter who could, scared, abused and probably used for bait. He is just a horror case. I had told the wonderful sergeant who called that we just can't save them all..the lament of a broken down burnt out rescuer. Well, I got a lesson taught to me. I had suggested a chip in and the next thing you know, the community had put together over one thousand dollars and found a rescue to take Chance on.

You can teach an old dog new tricks and today, the old dog is me. I forgot to believe. I always say there is more good than bad in this old sad world and had forgotten my own words. I had to be re-taught. That is a lesson I don't mind re-learning. I apologized to the group and thanked them for reminding me that all humans aren't bad. Today, Chance and I each learned that lesson. Good for Chance, good for me. There is hope.

I couldn't sleep all night last night over Arthur. The lawyer who'd agreed to take the case wanted to negotiate and mediate. I am down with that, but with a stipend. These people have lied and defaulted and without a cash fund set up in Arthur's behalf and which would be forfeited the next time they lie and default, what is the incentive for them to begin to uphold the original contract they signed. The lawyer went on to give me some advice on how to rescue. For a person who makes her living writing contracts, she was basically asking me to not hold to a contract. Her suggestion amounted to just giving people the dogs. If I was going to do that, I'd just haul out a bunch of dogs from one of these high kill shelters and take them down to Petco on the weekend to be sold to the highest bidder. My suggestion to her is why don't you stick to lawyering and I'll do Reunion.

Arthur has to go on the shelf for a short while, but certainly not forgotten. I just need to get enough to hire Bruce Wagman. Back to square one. It's a feeling of despair, but I have to hope yet again, there are more good people than bad and hope the people who do animal testing for a living aren't testing on Arthur. Sometimes I feel very alone.

I got a wake up call from Doug. ACC stopped by to check on all his dogs and make sure they all have rabies shots. This is the same ACC who doesn't even have a program to find a lost dog and one which doesn't even check on dogfighting rings, but they're gonna go over and bother somebody who has an extraordinary set up and refuge for everyone else's unwanted dogs. Please. Give me a frigging brake. I get all these calls from locals who are rightfully worried about their neighbor's mistreated and abused dogs and cannot even get ACC to pay a visit!

I also woke up to finding out Darla had been over-vaccinated at PHS. I guess if they didn't get to kill her the way they wanted to, humanely euthanizing, they'll kill her in another way, but over-vaccinating a dog who has recently been vaccinated. This is pure d animal cruelty. For a place with humane in the title, unforgivable. The only two words that are accurate in their name are peninsula and society.

I'd written a reply to the veterinary and kennel manager, somebody I have history with as do a bunch of dead dogs and cats I've known, to please refrain from giving this dog an unnecessary vaccine. We had proof of recent vaccines and I even sent links to scientific studies which cite the horror and danger of over-vaccination. These people do not care. This is the same dump in which the blogging director, same guy in my book, laughed in my face when I asked for a wellness check on Arthur. Anyone who laughs at death and torture ain't no friend of mine or of Reunion Rescue.

This is another case of shelving. These people will get theirs. I am trying to think about Benny today and trying to learn how to let these people and their awful cruelty be an example to me. I cannot stop their evil ways, Santana, but I can stop myself from being anything like them. I can work to make a difference and show how to detox animals and try remove the metals, toxins, anti-freeze, formaldehyde and other nasty items from their bodies.

I'd love to be able to vaccinate all these mean people with the same crud they're injecting into innocent animals only it'd probably just make 'em meaner and eviler. Little bitty things like Buttercup by Lucinda make me feel a little bitty bit better.


Live Chat Software
Posted by Pit Bulls and Other Animals at 3:26 PM No comments: