The Business of Rescue

From my perspective, you have a slick ad campaign and lots of resources, or a houseful of dogs and more in your computer who are desperate at a chance at life. Instead of opting for the nice website and marketing strategy, I kept saving dogs. Ok, call me a hoarder, but at least I'm a high class hoarder.

I wrote Pit Bull Nation about my experiences rescuing pit bulls. I shared how I did it on a shoestring, literally and how to treat homeopathically and through diet. I share how we've successfully dealt with mange, cancer, rabies vaccinosis, aggression, and on and on and on. Every penny is directed to Reunion Rescue to try and save more dogs.

Instead of selling books, doing radio interviews and figuring out how to buy copies to send to reviewers...the only way to get your book reviewed...I'm still saving dogs. I can't seem to just say no, that one doesn't deserve to live.

My day, and yeah, I'm venting, is spent answering emails, phone calls, questions and pleas about dogs in need, personal pets with cancer, evil shelter directors who kill seemingly for the fun of it. I am pretty much done in today. I'm certainly sympathetic to those people and their beloved pets who are so sick, but there is so much great information on the internet to help. I know I certainly make use of Mr. Google.

This is one of those sad days when I just don't have enough to give back. I feel very sad and empty. I have been writing checks to cover the dogs in foster care, the ones in boarding, ordering homeopathy and supplements to send to them and even to the private dog owners. Not one person offered to help Reunion Rescue. I guess that makes me a little sad.

Mr. Sweets and Benny need donations and little Suzie Wong is in a boarding kennel. She didn't even get a chance to go into foster care for her homeopathy. I have Pearlie Girl in boarding at $100 a week with no sign of her ever being ready for adoption. Glory is in boarding here and Pip is with me. Thank goodness I decided to keep the kittens. They are the joy of my life. They rescued me. I think I'll go pet a kitty.

Live Chat Software
Posted by Pit Bulls and Other Animals at 3:34 PM No comments: 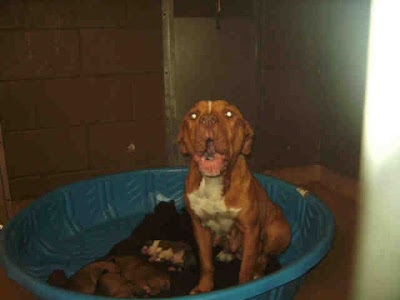 This one didn't even get to have a name. Just A#145385. The difference between this dog and all the other dead pit bulls is this girl has national attention. The Garland, Texas high kill animal pound has a bad reputation. They just shut down their gas chamber after nationwide pressure. I have a letter from District 7 Rick Williams actually trying to convince me gassing is humane. Where is he from, Poland? Today, Garland is acting like Poland where six million humans were gassed to death. People knew what was happening and nobody said anything.

Shame on Garland, Texas. Texas is a big place, but tonight, I can't get far enough away from the stench of that hole you call your animal services.

I will quote the brilliant words of Neil Young tonight. He wrote this song about scumbags like the ones that run Garland Animal Services.

What if you knew her
And found her dead on the ground
How can you run when you know?

I won't run. I did not know this girl, but I tried to save her. I am still waiting on a reply from the director who ordered the slaughter, her rescue coordinator, Luis Martinez and a reply to the official computer record in which they are required by LAW to respond.

A nationwide petition is being circulated which demands the immediate dismissal of Oats.


An innocent dog died today at Garland Animal Services. Director Diane Oats ignored the pleas of several rescue organizations and killed the dog just because she could. There has been a history of unfortunately experiences between this facilty and the rescue community who works to save Garland animals.
January 4, a private rescuer was attempting to exit the momma dog and her newborn puppies from Garland ACC. As with reports about this shelter which only recently was forced to shut down their inhumane gas chamber, the incident was fraught with anxiety and mistake. The woman was in a hurry and reached to pick up the sore dog as she was being hastened out the door. This dog, who'd passed all temperament tests with flying colors, bit the woman in surprise.
The woman issued a written document stating the mishap was her own fault, that this dog who never even had a name or a chance at life was not at fault.
Pleas came in from the local community and from around the United States to save the dog. Diane Oaks was left multiple phone messages and emails sent unanswered to her government email address. Reunion Rescue, Buddy's Rescue and Rehab as well as several others stepped forward with formal requests to take the dog into their program. Notes in the dog's official computer file, messages and requests to issue legal documents to pull the dog and messages left at the front desk were all ignored by Oats and her staff.
Like so many of the shelters today, Garland is operating as if the dogs belong to them. They are killing, because they can. Today, they led this girl down the hall to her death as she wagged her tail and looked up at the staffer with a smile. This was not an aggressive dog and she did not deserve to die.
Two crimes were committed. A life was stolen, not only from this beautiful creature, but from the many people who fought around the clock to save her.


A worldwide petition is being circulated to demand the immediate dismissal of Oats.

Live Chat Software
Posted by Pit Bulls and Other Animals at 5:14 PM 1 comment:

Rosie and the whole wide world.... 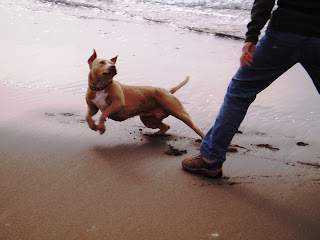 Rosie was adopted by Cornelia one year ago from the high kill Martinez Shelter. She was a dog who'd been used as a breed sow and money machine in the hood like so many others. Rosie was one of the few lucky ones. When Cornelia contacted me and asked if I knew of a dog she could meet and potentially adopt as a companion for her older boy, Scout, I jumped at the chance to pitch Rosie. At the time, her name was Sunni and she was literally moments away from euthanasia. I asked Cornnelia if she'd consider meeting Sunni. The next thing I knew, Sunni, now Rosie was saved. Cornelia right out adopted her!
Even though we have a solid foster to adopt
program with information following this post, Cornelia took Rosie home to her beautiful sun drenched home in the Marin Headlands where Rosie enjoys lolling on the porch with Scout or frolicking on the beach with Cornelia and her husband, both stay at home writers.
Since Rosie has begun her new wonderful fairy-tale life...fairy tales DO come true....Cornelia has helped rescue other pitties in need at local shelters in her area and her brother in LA rescued Gunner and Dudley!
It isn't hard to make a pit bull happy and they will spend their lifetime repaying the favor. Please consider saving a life today. Do not breed and buy while homeless animals die.
First, you should read my nutrition page below and consider raw feeding. I would hesitate on the vet visit. The shelter doesn't let out sick dogs and the vets see you coming..I have had really bad experiences with new adopters really being taken to the cleaners because they wanted to do the right thing. I cannot warn you enough to perhaps take a breath and do a little healing from within. I can show you how to feed your dog nutritionally, how they were designed to eat, cheaply and you will probably never ever need to go to the vet.
I know it sounds radical, but hope you will at least take a look at the Nutrition Page. I also give all of the dogs and cats here and in my rescue homeopathy. If you get a virus, parasite, etc. while transitioning over to raw (once a dog is grounded in the raw diet they rarely pick up any diseases) you can call me anytime 512-762-8963 or email me and I can tell you what to pick up at Whole Foods (7.99) for homeopathy and kick that acute problem out while the system and immune system are strengthening.
Next, visit Junior's Page. There are two docs on there that will change your life and jumpstart you and puppy to a perfect life with your perfect dog. The first Step 1-2-3 pit bull starter kit is a one page crate training doc. If you don't have a crate, pick up one on Craigslist for pretty cheap..I like the plastic ones Vari-Kennel, but some prefer the wire which can be broken down for travel. If you follow the directions explicitly you will have a crate trained dog and a crate trained dog is a happy, secure, confident dog. The next doc is the Kong. If you follow the directions explicitly, you will have a dog who loves her Kong and has something to do in the crate. A properly Kong trained dog will never need another chew or toy..they will all be about the Kong..the doc below that has about a million recipes for things to fill the Kong with, but that comes after level six.
For transitioning her through all those awful shots and who knows what kind of diet, etc. order Emergency Essence and Adol Essence from nolareiki@gmail.com. If you call the guy Monday and tell him you have a new shelter adopted dog, he might recommend another essence for her besides Adol, but order the Emergency for initial transition. You will give the essence starting with Emergency by pounding five times on your palm and dropping 7 drops into the water supply. If you order three bottles, no charge for shipping. Quite a bargain. I would also give her Chlorella to pull the metals out of her body from all of the shots she's been given..see the vaccine information linked at the bottom of the Nutrition Page. Every dog who has had these vaccines should be given a series of Waiora Cellular Defense which you can order through the website. It's kind of expensive at about $58 per bottle, but will pull the toxic metals injected into your pet when vaccinated. These metals and toxins cause horrible side effects like aggression, hair loss, allergy and food intolerance, behavior, over chewing, fear, and on and on. Just visit the Links Page on our site: http://www.reunionrescue.com/id8.html and click on the Waiora Zeolite link under Animal Health and Wellbeing.
Last, you CAN teach an old dog new tricks. Call Bob Gutierrez linked at the bottom of Junior's Page and arrange for a basic obedience class. Tell him you are an Animals First/Reunion Rescue dog saver and the code words are either 'Kharma' or 'Junior'. Bob will give you a substantial discount with punch cards for classes. He is our dog whisperer and the best trainer I've ever heard of. Bob has been training for over 30 years and has trained just about all of our rescue dogs for over 10 years. There is a reason we can say we are the 'home of the world's friendliest pit bulls'.
Please join our online group by linking to the button on the home page. We would love to have you and are transitioning over from the old Topica group to the new Yahoo Group, Reunion Rescue Play Group. It is a great support group of other animal and dog lovers who have saved a life just like you. Welcome to the club! It's a wonderful life.

Live Chat Software
Posted by Pit Bulls and Other Animals at 2:49 PM No comments: