Puppies and other little critters...

Sadie and her puppies are still in Bakersfield. They are being fostered by Shane and crew. I know he's probably rethinking the whole thing, but were it not for Shane, this mom and her pups would all have been euthanized. Thank you, Shane from the bottom of our hearts.
Patty Boles of H.A.L.T. Rescue and I are co-pullers and sponsors of this family. Patty will be handling all of the puppies adoptions and I will be taking Sadie. Sadie has had (as are all these dogs) a bit of problem since her rabies shot! I am getting plum sick and plum tired of reactions to these pathetic killer toxic shots.

Once and for all, here are some simple links on my site....links which I recently sent to the Peninsula Humane Society when they OVER-VACCINATED a dog who'd recently been vaccinated, Darla. I guess they thought, well, since we don't get to euthanize her like we really wanted to do, we'll just torture her poor body by injecting rabies, lead, mercury, toxic chemicals, formaldehyde, anti-freeze and other horrible and nasty substances into the poor animals' bodies.

Every person should be aware of what is being injected into innocent pets. Here are the same links I sent the so called 'veterinary' vice president at PHS...which, the more I hear about this awful place, the more terrified I am. I do believe I'd sooner adopt an animal to somebody in Garland, Texas than San Mateo County, California and Garland is where they were recently forced to dismantle their gas chamber. That's how scary the Peninsula Humane Society is to me. For someone pulling down big bucks and posing as a vice president of veterinary care to flagrantly disregard a letter citing a dog's recent vaccination and to re-vaccinate that dog out of spite is just plain wrong and it is animal cruelty. 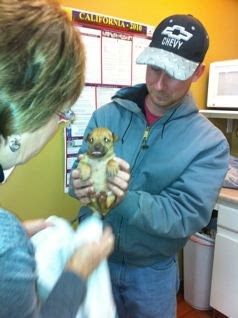 Posted by Pit Bulls and Other Animals at 9:16 PM No comments:

Somebody (namely me) needed some good news for a change. Amid current state of mass euthanasias in the shelters with the Best Friends and others who race across the country to 'save' $50,000 pit bulls while locals dogs are dying....ignored by these Norma Desmonds of rescue.... I got some good news tonight.

Petey Pie was sitting at the Kern County shelter waiting to die. I was not looking for another dog and especially not a puppy. I can't handle the usual people who apply for puppies wishing for a dog they can train...the shelters are chock full of 8 month old dogs who were once puppies these sorts of people wanted to train. 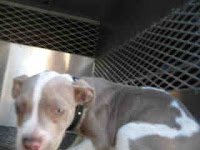 I was looking through the photos on Pet Harbor for Sadie, the dog Reunion and H.A.L.T. Rescue pulled and saw this terrified little boy. He knew he didn't have a chance. So frightened and timid.

I immediately emailed my good friend, Bibi, and asked her if I pulled this one would she foster. Bibi is an angel. She is in the middle of a move, has a three year old toddler, a cat and a terrier mix named Manny and works more than full time. She told me to save the puppy and she would make it work.

Petey was with Bibi for almost two weeks and just went into a foster situation with Cari and Adam. They are committed to sticking with Petey Pie's raw diet. Adam is a chef and Petey's first raw meal was duck, which he engulfed. He loves his raw diet and enjoys the delicious cuisine of Jeffrey's Natural Pet Foods in San Francisco, California.

I wish everyone would feed raw, spay/neuter, love their doggy and treat with homeopathy like Petey Pie. This is how all Reunion dogs are treated. I wish we could save the world....one pit bull at a time.

Live Chat Software
Posted by Pit Bulls and Other Animals at 8:28 PM No comments:

Finally broke down and hired a company to help me build these landing pages for Reunion and it's taken over three months. The guy finally said he was just a volunteer and couldn't understand how to do it. At least he leveled with me. Either way, I'm out $35 dollars a month for three months and still don't have a landing page for Reunion.

The dog I got from Wasco is turning out to be a long timer. The people who pledged $150 for him and swore he was perfect with all dogs have been strangely silent. Oh, well. It's very sad now all the ones I cannot help and must hit delete over and over. I am very sad about that. I wouldn't have taken on another lifer who must be rehabbed and detoxed for a long time when I could have helped so many others. From now on, I'm going back to pulling directly from the shelter on my own hunch. Dang these 'gotta save this one, gotta save that one' then disappear out of the picture entirely once the dogs are sprung. And only $50 of the pledge came forth as well. Hmmmm.

One happy thing happened today. I offer all this advice and never a thank you. An ex-friend recently adopted a golden. He came with severe mange type symptoms derivative of rabies vaccinosis. I spent literally hours on the phone explaining how to feed a raw diet...relatively simple, but turned into a HUGE event. I gave them Waiora, the expensive product I use to detox from rabies vaccinosis. Not even a thank you.

I asked her to please write up a short explanation with before and after photos to post on the website. This way, we can help others transition and cure from these nasty vaccines. The reply was they didn't have a photo. Imagine. In this day and age of camera phones, no photo of your dog. How did you adopt him in the first place? Sight unseen? What rescue doesn't have a photo of their dog? A Petfinder or Adopt a Pet account?

Finally, I get a note from her husband who has written up the story on the golden rescue website. Excitedly, I upload the piece. It is the longest drone about the dog and the horrible condition he was received in. Horrible rabies vaccinosis and how this wunderkind new owner began to research. He discovered the raw feeding and how this dog now has beautiful fur and is so wonderful. To be fair, he mentioned 'a friend who operates another breed rescue'. We all know what breed that is, a breed of dog so awful they cannot be named in the holier than thou golden rescue site. Please. What're those old pit bulls gonna do..eat the text like pacman? This guy'd never even heard of rabies vaccinosis and now he's discovered the cure. Give me a big break.

My circle is shrinking. I do not have time for people like this in my life and you know what? I don't want them around my dogs either. So there.

Another good thing and then I'm going to bed. I got a ride for Miss Hazel! Yay. She is going to be flown to Livermore on Saturday and will then be carried in style to Bundock's Kennels. A very sweet volunteer is offering her companionship and her dear friend will drive. These two ladies are donating their time, their car and their love of animals to make sure Hazel is driven safely and carefully to the kennel where she will be boarding until we find her a suitable foster home or forever home.

Bless you, Michele and thank you for giving me a ray of hope. I can go to sleep tonight knowing there is definitely more good than bad in this old sad world.


Live Chat Software
Posted by Pit Bulls and Other Animals at 9:15 PM No comments:

It all becomes real when it's time to pick up the ashes. I'm not a rich well endowed shelter, but try to have every animal whether a rescue or one of the pets here cremated. I have a shrine upstairs where all of the ashes are held near the sunshine. 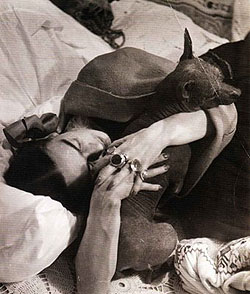 There is a little Frida Kahlo statue and one of her little dog. There are patron saints, Benedict and Francis. There is a Greek icon and some Mexican religious art. Then things got rather out of hand when some more fundamental types tried to get in on the act and give me little angels and scriptures...nice, but it's like when Gary's mother, Janet got a plaster rooster. Over the years, all of her friends started giving her chickens and it became a pain rather than a collection. You don't want to hurt someone's feelings, so you take these offerings.

I remember when Roy, my cat, was dying. He was offered reiki and let the reiki practitioner know that he saw all the little fairies and spirits flying around my shrine. He told her he would be there soon.

The little dog who died is going to Best Friends. I'm a little bit sad, because I remember the dog I asked Best Friends to help with. She was a beautiful dilute brindle. She didn't have the luxury of being accepted into Best Friends. Her name was Lapis Lazuli. I helped the guy who found her for a year, but she needed someone who knew dogs to rehab her. If I would have known then what I know now, I could have done more with detox and flushing her system. At the time, I only knew about Best Friends.

I called and begged them to consider Lapis Lazuli. I told them she was the greatest dog and truly workable. She was high prey drive, but she could have been one of the great ones in the sense of Martha and in the sense of Girl. 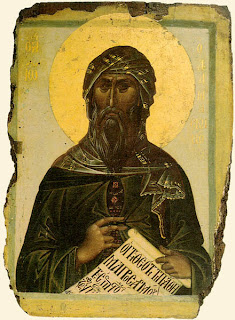 I promised Best Friends when I got them on the phone that I would raise whatever amount of money they required to take Lapis and work with her. I got the same spittle you hear from PETA when you call and ask for help with a real animal who's really being tested on in a research lab. I got the same canned answer, 'oh, we can't save them all...' and on and on. They were kind enough to recommend a local Austin 'behaviorist' at almost $300 an hour. I even called her and emailed.

I even got a reply....after the finder had taken Lapis to Town Lake and had her euthanized. Yeah, Best Friends, you got that right. We can't save them all.

Well, for x amount of dollars, they roll out the red carpet for beloved animals with an endowment. They have the Best Friends Pet Guardian Pet Trust Plan which includes the ability to select Angels Rest Pet Cemetary as your beloved pet's final resting place.

I am committed to making a difference. Before I'm dead, dead and gone, I am going to find out what causes aggression. I'm already onto something. I know, know know know, it's connected to those vile rabies shots. I've seen it with my own two ojos.

I can do that for Baxter. I can do that for Lapis. I know in my heart and in my soul that these two beautiful beings are already romping together in that place where I shall join them...that place where everyone's tail wags and everybody has teeth..every animal is healthy. There is no sickness, there are no rich corporations who make money off sorrow. There is only goodness and there, everyone gets to be a best friend.


Live Chat Software
Posted by Pit Bulls and Other Animals at 8:16 PM No comments: