Most every day now I get up to the rowly sounding grumblings of BeBe when her herbs wear off around 6 a.m. Remembering the good old days when I slept in till 7 or 7:30, I roll out of bed to let BeBe out and make up her herbal meatball.

BeBe is the dog who started the whole Spindletop saga with me and Reunion Rescue. BeBe used to be Batgirl from Town Lake here in Austin before it become the Austin Animal Center. The only place I could find on short notice to board and rehab her was Spindletop Refuge. It was too good to be true. Way too too good to be true.

Over the next year and a half, I became close with Leah Purcell, the proprietress of Spindletop Refuge and Rescue. I believed in Leah and her operation wholeheartedly. In fact, I placed several other dogs in her care and recommended her facility to others across the United States. 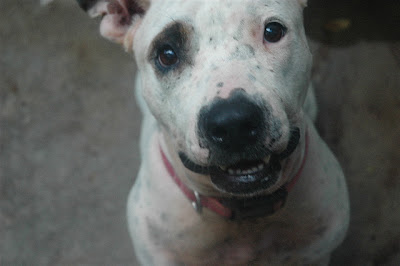 Two of the dogs placed into Leah's care were Amber and Stella who'd been found by a BARC volunteer abandoned and noosed to a chain link fence in a vacant lot during the hottest part of the summer. Stella's ears had been cruelly butchered off and she had blood running down the sides of her face and neck. One would think that sort of torture would be the worst of it, but worse was yet to come. Stella was killed in the Morgan Building with 37 other dogs victims of heatstroke.

If anyone has ever seen a dog suffering from heatstroke, it's not a quiet matter. The thought of 38 screeching dogs is hard to imagine. I wake up at the crack of dawn to one yowly girl, so almost 40 screaming animals is almost too much to conceive.

In a roundabout way, what I'm trying to get at is this. Every time I start to resent waking up to BeBe's noisy alarm and her setting the others off like a crazy zoo, I have to remind myself to be grateful she is alive. 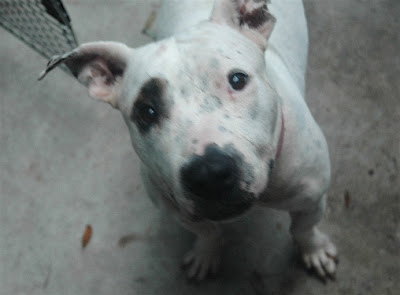 I come downstairs and let her go outside. I stop by and pet Amber who is still alive and here with me. When I look into her eyes, I always think of Stella. I missed the opportunity to pet her and get to know her. There is a sadness in Amber. Dogs know. She knows her friend is dead. My job now is to care for her and make certain her life is happy, to put the spark back into her eyes.

Amber has a star on her head, some scarring from some unknown horror in her past. BeBe has fence fighting marks along her own muzzle and head. Nolan is still trying to gain weight from being almost starved to death and Peanut who somebody had named 'ugly' in Spanish is still trying to learn not to be afraid.

What happened to these dogs? Their awful stories did not start at Spindletop. Whatever happened to them and the others who wound up at Spindletop is a mystery, but something we must all be held accountable for. What is going on in our country that there are so many abused animals? When did it become allright for millions of animals to be killed in shelters because there are too many of them? We did that. We are the reason there are too many animals, so many that we cannot prosecute animal abuse properly and so many that mass death becomes the norm...becomes acceptable.

What needs to be done so that animals like BeBe, Amber, Stella, Nolan and Peanut do not wind up at places like Spindletop? What can I do to help change the tide?

I have made BeBe a promise. She is so messed up, much worse than the dog I entrusted to Spindletop. Being crated 24/7 does that to an animal. She has been driven insane. I am watching her and waiting for the answer to help her. I know it will come. We are on a journey together, BeBe and myself. I'll be honest, I lose my temper with her. She can be trying at times. When I do, I apologize. I actually say, "I'm sorry, BeBe. I'm just a person. I am not a dog trainer." She'll look up at me like she's saying, "I understand. You're only human."

We have a relationship, BeBe and me. We are two and we are strong. I am really blessed to have her in my life. She is also a very silly girl. Sometimes, I call her by her other nickname, Bambi, like an exotic dancer. Today, when we were playing ball, and there is a very specific way to play ball with BeBe-Bambi. You throw the tennis ball and she prances after it, bouncing her butt across the yard joyfully and very un-gracefully.

When she retrieves the ball, game's on. I am then to try and get the ball from her. Everything you ever learned about training and proper game play with pit bulls is out the window with BeBe. The main exercise she gets is working to move her body just out of reach so you can't grab her. In fact, we both get a workout with this routine.

When she's ready, she allows me to grab her by the haunches which takes both hands. I hang onto her with my right arm and manipulate her head with my right hand while trying to unhook the ball from her  clamped down jaw. She's nailed that ball with her canine so that it's near impossible to dislodge. More exercise for me.

We do this over and over again. It's certainly not training in any form or fashion, but it works for us. For those playtimes in the yard, BeBe and I are happy together. There is no past, no trauma. There is no Spindletop for either of us, no guilt. There is no death row for her or a person hitting her on the head with a baseball bat.

The raid at Spindletop changed that. Even without funding, I had to find a place to put these dogs. For now, we are very impromptu with regulated crating and lots of yard and ball time. It took a horrible tragedy to make it happen. I'm very sad, but must look forward and be strong for the dogs. BeBe will not let me shirk even a little bit. She expects a lot from me and that is just what I need. I am learning from BeBe. 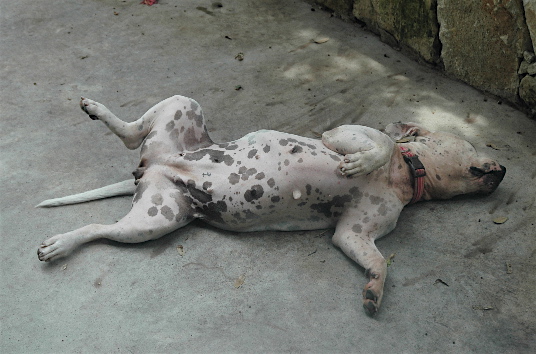 Posted by Pit Bulls and Other Animals at 11:30 AM No comments: