If you can keep your head when all about you...

If you can meet with triumph and disaster
And treat those two imposters just the same;
If you can bear to hear the truth you've spoken
Twisted by knaves to make a trap for fools,
Or watch the things you gave your life to broken,
And stoop and build 'em up with wornout tools;
'If' by Rudyard Kipling

This week has been a reign of terror and mass confusion. The usual hordes of dogs' faces literally stampeding across my desktop, each one's eyes begging for life. I can only save a few and have to make Sophie's Choice every day.

This week, five were saved.

Little Grace and Natasha made it out of Shafter ACC. These two are two of the lucky ones. They are young and healthy, beautiful girls who are each going into wonderful foster to adopt homes.

Benny was a long shot. He had given up and was waiting in Turlock to die. I sent him a message and made a deal with him. I asked Benny to give life one more shot. I asked him to hope when he didn't know what hope was. He is trying. We are treating his horrible mange and past abuse with homeopathy, love and good meals. As homeopathy works, sometimes the symptoms spike out of control and the patient seems worse as it happened with Benny. Last night, his foster mom called very upset and worried. Benny had developed a horrible cough and she could hear a nasty rattle in his chest. I had a suspicion that the toxins were collecting and Benny's body was trying to move them through his system. He was given one more dose of his homeopathic remedy and was sent reiki.

This morning, foster mom called overjoyed. Benny coughed one more time and that was it. She could see a spark in his eyes, a healing taking place. He went downstairs all by himself, a first.

Mr. Sweets was rescued from the high kill Riverside Shelter in LA. Other than Mr. Sweets' serious case of mange and worry surrounding his condition, the experiences with Riverside Shelter as well as the experiences with Turlock and Shafter were exemplary. Each of these three shelters went above and beyond to work with rescue and save dogs. This is huge.

In comparison, we received a letter from the Salinas Animal Services director in relation to the two we lost last weekend, Fancy and Little Angel. All of the time and energy being exhausted over two dogs who they still claim died 'accidentally' could have been channelled toward saving other animals. If Fancy and Little Angel had been in Shafter, Turlock or Riverside, they might be alive today. And these shelters do not have a paid staffer who organizes transport/rescue of all shelter dogs and sells her dog food at the bottom of every email.

Little Suzie Wong, a Chinese Shar Pei with a case of demodex caught a ride from Lancaster with Kathi, our reiki master and generous hearted transporter. Kathi stopped by Shafter in the nick of time, literally, to pick up Grace and Natasha.

Benny is resting and recuperating in his Mendocino foster home. Mr. Sweets is in a plush Hollywood foster home, living the lavish lush lust for life life. Suzie Wong is in a temporary San Francisco Bay Area retreat with Reunion adopters who practice great diet/homeopathic lifestyle.

Last Saturday night, I heard about a little one, just three months old, who went to his death long long long before it was his time. He fought to live, but was not strong enough to fight the system at this shelter. Well, I'm making him a promise.

Join me in my fight. Join NoKillCali.

Live Chat Software
Posted by Pit Bulls and Other Animals at 4:48 PM 1 comment:

Sick of BSL and the Ignorance Behind it!

I am from east Texas and I'm used to narrow mindedness, even though east Texas doesn't have the market cornered on bullheaded thinking. When I saw the Tyler, Texas article trying to whip up a hate session against pit bulls, I just plain had enough.

The article is written in a slanted style. This sort of writing is fine in a blog, but falls flat and leaves a sour taste when masquerading as journalism. As somebody who has been rescuing pit bulls 24/7 for the past 12 plus years, I have had a snoot full of these opinions disguised as news stories.

This piece revolves around an out of work judge trying to jumpstart her career by using a pit bull related incident and a known pit bull hater clothed as an animal rights person.

I'll let you judge for yourself. Here is the article:


I am the director of Reunion Rescue...a successful internationally respected pit bull rescue and the author of Pit Bull Nation.
Pit Bull bans do not work. Here is a site with great information for the misinformed, namely Kenneth Dean, the author of this slanted piece.
http://www.pbrc.net/
Dean quotes known pit bull hater Merritt Clifton whom I have had personal dealings with. Years ago, the San Francisco Animal Care and Control opened up a fire hose on a pittie who'd just been spayed. She had to have five feet of intestine removed. Clifton's group was contacted for help. Animal People refused to help this dog, claiming they liked the SFACC shelter director and would do nothing to help this abused dog who nearly died. This group hates pit bulls. Why he quote a pit bull hating Nazi in his piece?
The former judge asking for this preposterous measure is like most of these out of work politicians looking for a career boost. If ex-judge Kent really wants to help her community, why not work for legislation to educate about spay/neuter and training.
Why is not one pit bull expert quoted in this poorly executed rant? Because these people do not want an answer.
I am going to clue them in really quick. Here is how you transition any dog into the home as I've been doing for over 12 years. We have placed hundreds and hundreds of dogs into happy homes. Many of these dogs had horrible beginnings. Every one is tracked and a member of our Reunion Rescue playgroup. Many have gone on to become certified AKC canine good citizens and wear their medallions proudly.
Visit our site http://www.reunionrescue.com and read our Nutrition Page and Junior's Page. These few suggestions and guidelines are the reason Reunion Rescue can claims to have the friendliest pit bulls in the world. Crated dogs knawing on their organic bone or Kong toy are not the dogs you read about in your newspaper. That doesn't sell copy.
The next time you write an article on pit bulls, sir, try interviewing the pundits and experts at http://pbrc.net or glance at this study which proves bans don't stop bites and attacks:
http://www.care2.com/causes/animal-welfare/blog/study-shows-pit-bull-ban-does-not-stop-dog-bites/
I live in a state where idiot measures like pit bull bans are scoffed at and known to be ineffective. I have authored a book, Pit Bull Nation, about the breed, about my rescue work. In Pit Bull Nation, I champion my state, the state of Texas where no one can tell me what kind of dog to share my home with.
If Mr. Dean, Ms. Kent and even sourpuss pit bull hater, Merritt Clifton want to pay a visit to my house and tell me to kill my senior and beloved pit bulls rescued from death row kill shelters, bring it! Bring it on!
Stop this incredible ignorant insanity. Stop Justin's Law and stop the hate. It has never worked and never will.
http://www.facebook.com/home.php?sk=group_179064228793638
Cindy Marabito
Reunion Rescue
Animals First Rescue
No Kill Cali
Pit Bull Nation

Live Chat Software
Posted by Pit Bulls and Other Animals at 5:50 PM No comments:

Live Chat Software
Posted by Pit Bulls and Other Animals at 3:17 PM No comments: 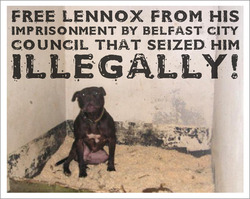 
Yes!
I can't believe the news today
Oh, I can't close my eyes and make it go away
How long, how long must we sing this song?
How long? How long?
'Cause tonight we can be as one, tonight
Lennox is a beloved family pet who has been impounded in a cold prison cell by misinformed Belfast, Ireland authorities who decided Lennox fell under their description of what a dangerous dog looked like. What is dangerous is inept representatives removing innocent pets from their homes. This is what happens when breed specific legislation is enacted. Innocent dogs die!
Lennox's staunch supporter, Clare Cassar, asked me to write a little something to try and help Lennox. His court date is February 1, 2011. Please lend your support to save Lennox.
Today, on this beautiful Sunday morning, Lennox sits on a dank cement slab, unaware of why he is being punished. If this legislation is allowed, it could be your dog next.
http://ctechwebhosting.co.uk/savelennox/
http://www.change.org/petitions/view/bring_lennox_home
http://www.savelennox.co.uk
http://www.forum.savelennox.co.uk
http://www.savelennoxblog.co.uk
http://www.YouTube.com/savelennoxcampaign
http://www.bebo.com/savelennox
http://www.myspace.com/535679822
http://www.twitter.com/savelennox
http://www.politicsni.wordpress.com
http://www.petitiononline.com/sl190510/p...
http://www.savelennoxpetition.co.uk
Please let your thoughts be known and save Lennox by visiting one of his sites and help network his story.

Live Chat Software
Posted by Pit Bulls and Other Animals at 11:18 AM No comments: