End of the rope and a silver lining...

Yesterday should have been one of the happiest days in Reunion Rescue's rocky past, but it turned into a day from hell.

Tara has entered our foster to adopt program after falling in love with William who's since been renamed Quentin. He is named for 'The Sound and the Fury" Quentin Compson, As complex as a Faulkner character, our Quentin had a rough start yesterday. 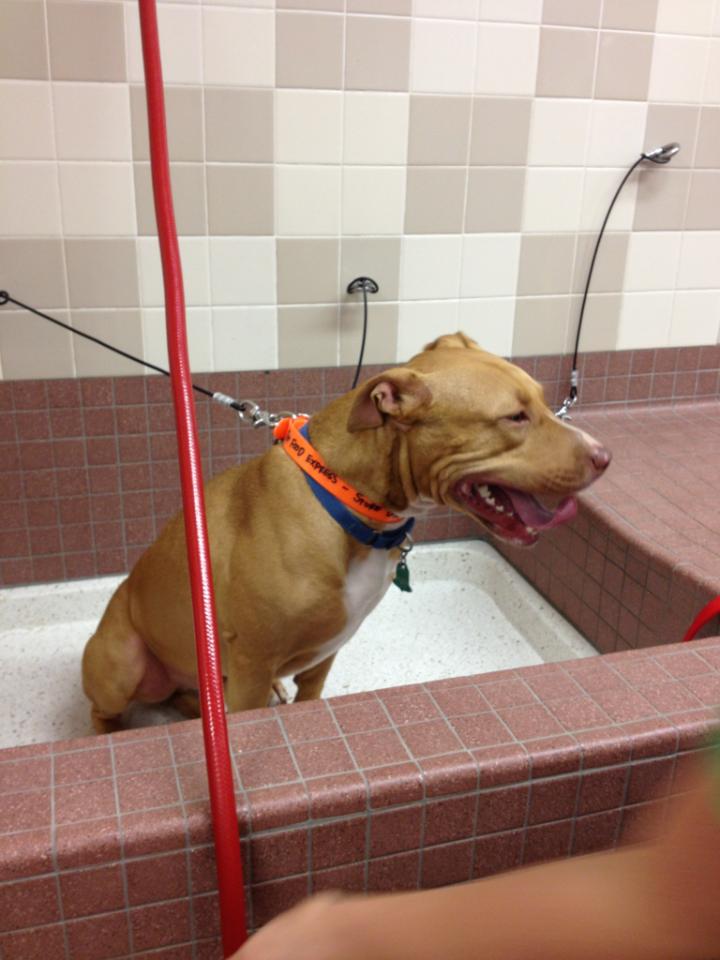 He made the first leg to meet Tara and our in-house APBT advocate, Adena. First stop was a bath as Quentin has been living out in the country and needed a bit of city-fying.

After arriving in San Francisco, it was discovered Quentin only prefers wire kennels, so yet another trip to the pet store last night to purchase another kennel, dog bed, more food and enticing treats to encourage Quentin to love his new crate and begin serious Kong training.

Our program insures with a good Kong training, any dog can get a full upper-body workout in his crate while mom or dad is otherwise occupied. Then, pup takes a nice long nap until the whistle blows.

Tara took Quentin on two long jogs yesterday afternoon and evening to try and tucker him out. Our boy is going to require some exercise. He is one of those boys who needs to run! Unfortunately, torrential downpours in San Francisco put a bit of a damper on things, but Tara and Quentin trudged ahead. With one minor incident involving a couple having an argument, Quentin remained strong even though as a timid boy, he was frightened by the episode.

Lots of Emergency Australian Bush Flower Essences will be helping Quentin make this big huge transition from country life to city living. We as humans understand these things, but imagine what it must be like for a dog who was nearly starved to death, dragged behind a car, thrown on a bar-b-que grill while burning and then winding up at the worst hellhole on earth, Stockton Animal Control.

Quentin is going to do just fine. It took some work, but an exhausted Tara got him into his new crate last night for his first night in a real home, in a real house, in the big city.

Jump to present....Quentin made it through his first big night. Tara just called and he slept through the night in his wire kennel. He's eating and learning Kong and digesting the sights, sounds and smells of the beautiful city by the bay.

I can finally take a deep breath and know that things might just work out. Quentin is enrolled for his first Better Way Dog Training class tomorrow morning with the best dog trainer in the world, Bob Gutierrez. Bob is the secret reason Reunion Rescue lays claim to having 'the friendliest pit bulls in the world.'


So I'm off now to walk Pip and get her ready for her first night in her new home with Brett and Jenny. Pip has been with me four years and has her own chapter in Pit Bull Nation, been through three high kill shelters and lived to tell about it.

There is a big silver lining in our clouds today.
Posted by Pit Bulls and Other Animals at 1:01 PM No comments:

Buster at the beach 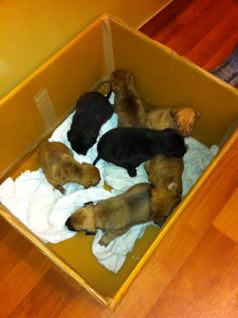 Buster is one of those dogs whose story is so common in rescue work. Buster and his 8 siblings were pulled with their mom almost two years ago in Bakersfield. Bakersfield KCAC is one of the highest kill shelters in the nation.

Buster and his family were found abandoned on S Street, one of the roughest areas in town. They wound up at the county shelter whose intake is 500 animals a week. Their chances were slim to non-existent.

Somehow we saw them and worked with HALT Rescue to get them to safety. Shane and family stepped up to foster and took on more than they could possibly have ever imagined. The puppies were only 3 weeks old, but mom, renamed Sadie, was unbelievably trusting for a dog from the mean streets.

They were fostered in the beginning at Shane's place of business where an assembly line was set up to wash the puppies. They smelled so badly, they had to be run through the system twice. Sadie got a spa treatment, a rarity for a dog like Sadie.

Seven of the puppies were placed over the next few months, but Buster and his brother, now Siesel, were overlooked. Buster was nicknamed 'Shy Guy' due to his low key manner.

Amazingly, Sadie was adopted by the foster family and now lives in the lap of luxury. Siesel and Buster took a little bit longer. After boarding Siesel for several months, he was adopted by longtime Reunion Rescue member, Vanessa and her husband Patrick. Siesel is adopted brother to Peugeot, their female pittie.

Buster was boarded for months and months. He was strangely not being noticed, something that continues to happen in rescue. Buster is low key, loves people, loves kids, great with all dogs and gets along with cats! With all those wonderful attributes, he just couldn't find a home.

There was a reason. Steaven and Ken adopted Benny from Reunion Rescue in early 2002. Benny's story was another one of those rescue stories. He was on death row at SFACC with his sister at four months. The SFSPCA pulled her and left Benny all alone. A shy dog anyway, Benny regressed, lonely and afraid. He knew he was unwanted and just waiting to die.

At that time, Reunion Rescue placed holds on all available pit mixes at SFACC to keep them from being put to sleep. Benny didn't know that, though. We pulled him at the last minute and he went into foster care. We were at an adoption event when Steaven and Ken first met Benny. It was love at first sight and after entering the Reunion Rescue foster to adopt program, they took Benny home.

Benny was always a shy dog, but Steaven and Ken worked hard to teach Benny not to be afraid to walk down the sidewalk and how to go to the dog park. Benny passed away after a long and much loved life. Steaven just happened to be looking at the dogs for adoption and saw a posting for four puppies. What do you know? These were four of Sadie's pups, but on an old site. All the pups had been adopted except for Buster and Buster was no longer a puppy. He'll be two soon. 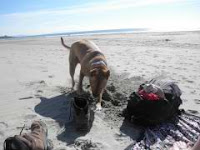 They had been thinking about a puppy, but Buster had been waiting for them. How were we to ever have known this was the plan? Steaven and Ken drove the two hour journey to meet Buster where we had him boarded. It was a match! 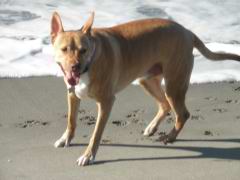 Buster has fit right in. He's got the right amount of shyness without being too timid. He has his own personality, but also has a little touch of Benny in him. It was as if Benny was directing this from his special place in heaven. I really believe, and so do Ken and Steaven, that Buster has Benny's seal of approval. That's how it works with dogs, you know.

Steaven and Ken took Buster for a vacation at Stinson Beach, probably the closest place to heaven on earth. He looks so happy playing in the surf and sand.

Dogs help us move through the hard things in life. What's more precious than watching a smiling dog on the beach....


"religion is the smile on a dog...
I'm not aware of too many things

Posted by Pit Bulls and Other Animals at 2:50 PM 3 comments:

We have a local vet around the corner who doesn't plain get it. This morning, I got an email from the office reminding me to bring Girl in for the following:

According to our records Girl is now due for a wellness exam.

We show Girl is due for the following treatments:

I was astounded. The only answer I could come up with and answered with was 'are you kidding me?'

What is going on? Girl is almost 15 years old and doing great. The last time she went to this particular vet was for blood work. According to the vet, Girl was dying and could not be helped. 'Get ready to say goodbye,' was his advice.

Well, she certainly isn't going to be helped with all those vaccinations which have been proved to cause cancer and all kinds of other diseases. Girl was treated for her infection by her homeopathic physician and she is thriving and living large...emphasis on living.

What kind of 'doctor' would over-vaccinate a senior dog, one he had written off as dying a few months ago?

Fortunately some states have lightened up on the vaccine laws and allow titers and deferments for senior and ailing animals.

Will Texas ever get there? Hopefully, but when and if these dumb laws are changed, what is this vet going to do? Start to actually learn to heal animals? What a notion.

Until then, Girl and none of the other animals here will be returning to this vet. They would rather live than die an terribly early death caused from too many shots from this doctor.

Posted by Pit Bulls and Other Animals at 10:35 AM 2 comments:

Years ago when I was at UT studying film, I had no idea the the waitress job would be my best training. In fact, I am now a dog waitress. I spend a good deal of my time serving nutritious meals to dogs, cats and birds.

We don't have any help, so I'm the busboy, too. Nothing in life is a more profound builder of humility than serving dogs. I've had food, plates, beer, drinks and all kinds of stuff thrown at me by angry drunk customers back in the day. Nothing equals being vomited on by a dog after you've driven all over creation to obtain quality organic free range chicken and beef. You just keep trying and start thinking orthopedic shoes.

Friday, Reunion did a Petco Lakeline event and found out all kinds of interesting things. Petco Lakeline is built on top of miles and miles of underground caves.

Petco also had deer antlers on sale for members. After loading up on Petco paper litter, I splurged and bought each of the in-house rescue dogs a deer antler.

After a couple of obligatory licks, the antlers were totally dissed and lay there by each dog, expensive and ignored.


Being a good dog waitress, I was not going to let them get the better of me. I did what any self-respecting dog waitress would do in a case like this. I went straight to Facebook. After posting on Reunion's rescue page, I got some pretty good advice.

One of the commenters had faced the same problem and tried boiling her deer antlers to coax out smells and make them more attractive to the dogs. That sounded good, so I collected all the antlers, which unsurprisingly, no one seemed to care in the least.

Placing them in a pot on the stove, I took Peanut outside to throw the ball. Naturally, I forgot about the antlers and returned to a house full of smoke and a pot full of burned deer antlers. Once again, I've failed miserably as a dog waitress.

On the upside, though, it's a job you can't seem to get fired from. No benefits and tips are laughable. You can forget about any kind of paycheck and this job really seems to age you.
Posted by Pit Bulls and Other Animals at 7:27 AM No comments: