Fill your hands, you son of a bitch

Today was one of those epiphany days. I'm dealing with Peninsula Humane society who wants to kill another good dog. She's mouthy, but that's so dang fixable. Earn your keep, behaviorist...quit killing dogs that are fixable.

I'm dealing with a transport from hell and people who think their rescue work is harder than mine. Lest they forget, I will be with this dog for the rest of his natural life. While they're all home asleep in their beds, I'll have my computer on catnap and my phone juiced for the rest of Guido's life. When he goes into foster to adopt, it will be the beginning of his new life. He will, as do all Reunion Rescue dogs, be detoxed to remove all those harmful nasty metals and toxins from recent vaccines. He'll be on a raw diet and go to training. He'll be loved and taught crate and Kong training. His new foster to adopters will join the Reunion Rescue playgroup and when the foster period is over and they're ready to adopt, we will all sign a lifetime contract. If for any reason Guido is given up, he will be offered to Reunion Rescue.

That is how all Reunion dogs are cared for and insured for their lifetime.

I have learned that I must tighten my circle today. I've been getting nasty emails from one of the crew who first notified me about Darla. I have had to bounce these emails. Just too dang nasty and counter-productive. For now, I'll think about Benny and being positive.

I'll think about Guido on his way to Bundock's Kennels where he will begin his new wonderful life while waiting for his new forever home. I'll think about positive things...but, should anybody try and get in the way of where I'm going...


Live Chat Software
Posted by Pit Bulls and Other Animals at 6:53 PM No comments:

One door closes and another one almost opens

In between the busy times..like at a garage sale when there is a flurry of activity then a quiet lag and another flurry, then another slow spell...that is rescue life and that is pretty much, life. Learning that I am not the busy times nor am I representative of the lean times and knowing that there is a greater power at work helps me keep on trucking.

Today, I had a bit of a punch in the nose. I was informed by the online newspaper I have been writing a pit bull column for that some people were irritated that I didn't live in the city from which the subject is directed. I am being redirected to a local non-pit bull column, but that's ok. I love animals and will write about any animal I have the opportunity to write about. FYI, thought, whether I am writing about pit bulls for Beaumont, Texas or Paris, France, the subject matter is the same. Didn't seem to matter that I actually lived in this town for 12 years of my life. I met and married my husband there. Rebel came from the east side as did Fu Manchu, the beautiful black chow who was killed by a vet from the same town...getting his teeth cleaned. In fact, the first chapter of Pit Bull Nation takes place in this town.

Pit bulls are going to be the same in any town. I am networked with many rescues and other folks who write me about the pit bulls and other dogs in this town. Some of my favorite songs were written about this town. Have you ever seen ....... from a DC9 at night? And speaking of Truckin', anyone got a soft machine?

Thing about me, I'm going to keep on writing. I am going to keep on saving pit bulls. Doing what I do is beyond any other person. Not trying to brag, but stating a fact. Nobody out there is rescuing pit bulls, detoxing and treating with raw diet, homeopathy and herbal cures like me and Reunion Rescue. At least. nobody I'm running into. I will stand corrected if anyone wishes to step forward.

I spend 24/7 ranting and raving about detoxing dogs and cats from nasty rabies and other vaccines. I spend the rest of the time trying to get people to try raw diet and purified water. Yesterday, I heard about yet another person who treats their own body with homeopathy, but had never considered treating the dog. Unfortunately, the people who make huge dollars testing on animals in research labs depend on the fact that the animals' physiology resembles our own. This is enough data to seduce trillions of dollars for cruel research, but not enough to convince people to wake up and treat their own pets.

But, enough about me. I am on a learning path. I want to know what makes dogs or anyone else aggressive. Before I kick the bucket, I will find out just what that is. I believe, as does the animal alliance believes, that there is a solution to everything. I believe it is complex as the beings we study are complex. I am a student of Konrad Lorenz of the orange boots and the imprinted geese and 'Man Meets Dog'.


I believe there is an explanation for aggression. I don't believe it's a simple one with an easy answer. I believe it's environmentally produced and thus should be addressed. I do believe aggression stems from all vaccines. Considering the toxic contents injected into the body, a body already sick from years of bad diet throughout the generations, no one can express surprise at that animal reacting. Some do not react initially and some, like Raspberry, react violently and immediately. Raspberry's story is addressed in my book, Pit Bull Nation, at length along with the details regarding correcting that condition.

Linda D., who was instrumental in finding the cause of Raspberry's vaccinosis, recently remarked how pit bulls seem to be overly sensitive to rabies and other vaccines. In Raspberry's case, the mercury in the vaccine began to attack the lining of her brain. She could not stand to be touched at all. It was as if her flesh was on fire. I am no communicator with animals, but I knew this about her. She let me 'in' on that knowledge about herself.

Again, this has become my life's work. I feel it is my calling to share what I know with others. Some of those others do not wish to know. It is not about them, but about the animals. I made that decision long ago in my rescue life. In fact, it has been the clearest choice I've made in my life's experience. When there must be a decision to choose the welfare of animals or the politics of people, I always select the animals. It's always been very clear and very simple with me. In return, I've had people scream at me, shun me, gossip about me, ban me from rescuing at their shelter, laugh at me as did Ken White, the overpaid director of Peninsula Humane Society. Go ahead and laugh. It only infuses my decision to follow my path. Anyone who thinks animal research is a laughing matter makes my choices the right choices. If I am the last two legged friend I've got, I find great comfort in knowing I spoke up for the ones who cannot speak for themselves. I will always speak up for them.

For the meantime, I will write some nice little articles about local animals. I will interview sources and quote them as requested. I will bide my time until the day when I will be able to broaden my audience and write about my beloved pit bulls once again.

I am the authority on rescuing the Reunion way. There is a reason we are able to say, 'home of the world's friendliest pit bulls'. And, soon, we will be able to show the world how all pit bulls and other animals can be non-aggressive. It might not be tomorrow, but it will happen. That is a promise from Cindy Marabito, saving the world, one pit bull at a time.


Live Chat Software
Posted by Pit Bulls and Other Animals at 6:10 PM No comments:

Benny and the food channel

Today I got to visit at Doug's and watch the crowd get their raw lunch. Benny was really one of the pack today. He came running out to say 'hi' when I arrived with the Hare Today order. I believe he was happy to see me, but probably interested in what might be in all those boxes.

I got to see Miss Holly Berry. She is such a loving sweet girl. I cannot believe I haven't had more inquiries about her. She is a doll. I know she'll get a nice home, but you can tell she is just waiting for her special person to come along.

Before, I started writing on this blog and it just up and disappeared. I think that's because I was upset about Buddy, Arky and Baxter dying and started writing a bunch of negative stuff. I'll have plenty of time to write negative, but now when things like this happen, I really believe it's a reminder from Benny to stay positive. I had an epiphany today. All of a sudden, it dawned on me if I can remain clear and positive, the animals might communicate with me. I sure hope so. I'm willing to give it a shot. 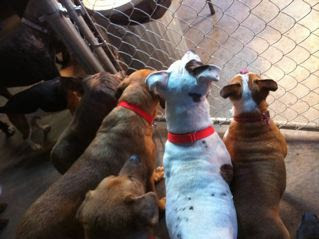 Benny living the good life at Doug's...eating a healthy raw diet..with an audience... 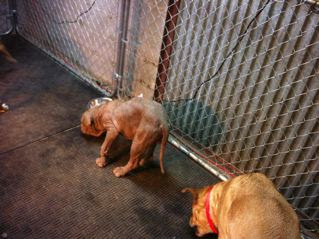 Miss Holly Berry waiting for her forever home...but cared for lovingly by Doug... 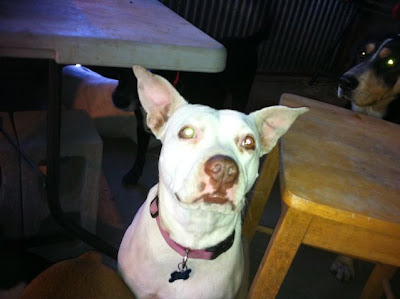 And the secret to true happiness... 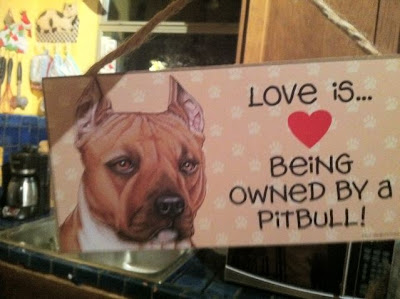 Live Chat Software
Posted by Pit Bulls and Other Animals at 6:12 PM No comments: