Bonnie G. Lewis from St. Louis, Missouri put together a convoy with three U-Hauls filled with supplies and put the pedal to the metal for Beaumont, Texas to help animals displaced by Hurricane Harvey. The hurricane had raged for days, submerging parts of Houston and turning Beaumont into an island. Bonnie's first thoughts were for the animals she knew would be at risk. What she found when she got there would haunt her forever...and it wasn't the water and the hurricane.

Bonnie, her boyfriend Jaimie and the convoy reached the Ford Center in Beaumont around 1 a.m. Sunday morning, Sept. 3. She was met by Tom of Safe K9 Transports whose team had been in place at the Ford Center trying to help the some 330 animals impounded until the Houston SPCA had taken over the operation. The Houston SPCA had shut down the Ford Center to volunteers at 8 p.m. Saturday night. "The whole place was locked down with only one exit," reported Bonnie. To Bonnie, this "was completely unacceptable," hurricane or not.
When Bonnie and her team arrived, the animals were 'lying in urine and feces' with no food and 'filthy water' bowls. Bonnie is no stranger to rescue and laboring to save animals in need. She quickly put her people to work in teams of two. Two would walk and two would clean, 'in and out, in and out, in and out." As they worked through the night for over four hours straight, they began to notice missing animals.

This video was shot at Ford Center Saturday, September 2 when Erika Pearce and her husband, Nick, arrived at 6 a.m. from Indianapolis to volunteer. You can clearly see the identification and contact information taped to each kennel by other people who'd driven from all over the United States to help animals displaced by Harvey at the Ford Center. This information along with contact and animal ID has disappeared as have many of these dogs.

A 'staff only' area had been sanctioned off which Bonnie had observed upon arrival. She had supposed this section contained the more aggressive animals. As they worked, they noticed this section of animals 'dwindling.' After four and a half hours, Bonnie noted, 'the staff only section was 2/3 empty' as compared to the number when her team had first arrived. The crates were empty and turned up.

Jaimie had just finished walking two gorgeous pit bull dogs, a grey and a brown. Alarmed, he grabbed Bonnie and said, "what happened to those two dogs?" The two cages were empty and flipped. He said, "I just walked those two dogs and they're gone!"

Tom of Safe K9 Transports has made several videos of the Ford Center to update the many people watching from around the world. Some of these videos contain empty kennels...many empty kennels. With all of the volunteer help, the Cajun Navy and others rescuing and bringing animals to the Ford Center, these numbers are not adding up.

The Houston SPCA has enlisted the help of local media to try and quash the 'rumors' of killed pit bulls and other animals.

According to first response volunteer Payu Vane who was at Ford Center for days bringing in animals, "rescuers were kicked out so we wont see what they're doing....at least one kill van was there when we left."

When asked how he knew the Houston SPCA van was euthanizing animals, he stated, "I only saw one...all white high top van parked out by the hay drop off lot...they can claim it was a transport but transport vans don't have a stainless steel table on the right side with a IV set up...only caught a glimpse of it before staff asked what the hell I was doing there."

These photos and statement are from one of the volunteers who attended the Houston SPCA meeting: 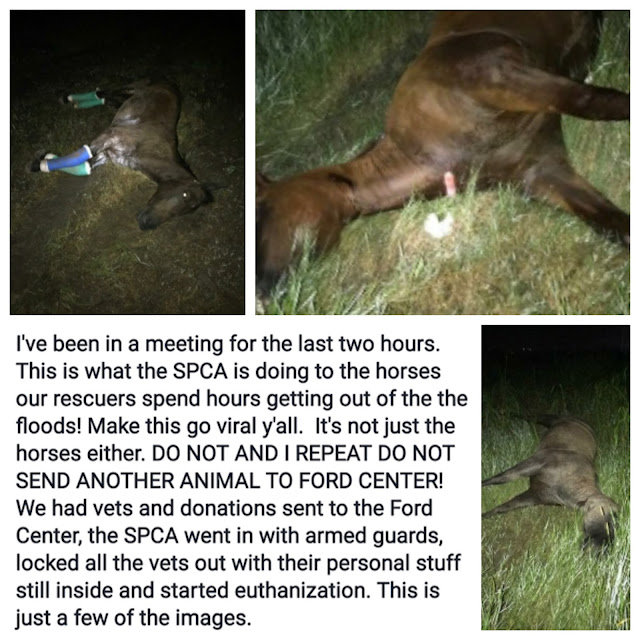 Jeffrey Michael Camiel of San Francisco has been on site since Saturday. He's attended several strategy meetings with Houston SPCA's Adam Reynolds who is heading up the Beaumont Ford Center operation. When he asked how owners could reclaim their pets, Camiel was informed the Houston SPCA uses a pet facial recognition program. This raises many questions as most of these residents do not have technological access.

Many good folks were at the Ford Center for days working to help the displaced animals from Hurricane Harvey. Kennels were filled with live animals when the Houston SPCA arrived on Saturday. Those good people were strong-armed out the door when the Houston SPCA put their team into action. This is how they operate.

The volunteers with phones who were shooting photos and videos were certainly not wanted to document these goings on. Some of those videos and photos leaked out and we are on the job to find out what happened to the paperwork and the dogs no longer there at the Ford Center late Saturday night.

We ask  the Houston SPCA just what happened to all of the animals these volunteers and first responders brought to the Ford Center. Every large animal organization has software and capability to log incoming animals. Most use the A# system utilized by Chameleon Software Products, "the leader in providing software and technology solutions for Animal Control agencies, Humane Societies, SPCAs, and other animal sheltering organizations."

The Houston SPCA is a publicly supported organization with charity status. This means, these animals do not belong to the Houston SPCA. The animals belong to the public which supports them. We want...no, we DEMAND answers. Where are the animals and their documentation people risked their lives to save in flood drenched Beaumont, Texas?

The Houston SPCA has uploaded 202 dogs to their website with ID numbers. Saturday, September 2 count was 330 when Bonnie Lewis arrived at Ford Center. Including the incoming since September 2, these numbers are off and leave doubt regarding the missing dogs from Saturday night, the subject of this blog.

If you have information, photographs, video or questions you want answered, please email Pit Bulls and Other Animals blog. 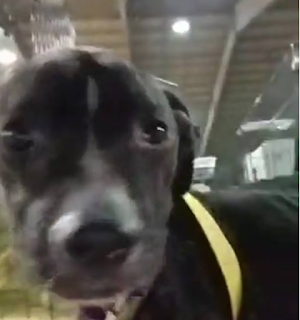 The Houston SPCA is trying to deflect rumors about euthanasia. Sadly and tragically, most of the rumors you hear about Houston SPCA are true.

A Facebook effort was begun in 2012 to try and let people know the Houston SPCA kills all pit bulls. The page, No name pittie will die at Houston SPCA was started when a female stray pit bull was found by a Houston resident. The kindly samaritan gave the poor dog some water and called Houston SPCA, famous for their Animal Planet program. What he didn't know from their widely broadcast program was the Houston SPCA's long policy of killing all pit bulls or any puppy or dog who even look partly pit bull.

When Houston SPCA’s deadly intentions…innocent dog will die because she is a pit bull was written in March 2012, the Houston SPCA had 180 dogs on their website for adoption and not one was a pit bull. That figure, in a time when most U.S. shelters report anywhere from 40 to 75 percent intake are pit bull breeds, raised huge suspicions that the Houston SPCA which employs an armed staff had no pit bulls for adoption. Why? The answer is a horrible one. All puppies and dogs with pitty characteristics are killed.

Over the years, many articles and petitions asking for an investigation have been circulated. Nearly 13,000 signatures have been collected, but the pit bulls are still being killed.

Over this past weekend, rumors began to circulate when animals became missing at the Ford Center in Beaumont, Texas. When rescuers and other people who'd traveled from all over the United States to help the animals displaced by Hurricane Harvey, the Houston SPCA turned them away.

Best Friends, the nation's largest and most well-respected sanctuary for homeless pets was chased away by armed guards and the Houston SPCA. Here is Best Friends' statement:

"The Houston SPCA has a history of a lack of transparency around consistent reporting regarding the outcomes for the animals entering their care.  They have questionable policies regarding pit bull type dogs and have received continued criticism from the animal welfare community around these policies. So it’s understandable that the rescue community and other pet-loving members of the public, aware of the Houston SPCA’s history, would be worried about what was taking place with the pets in Beaumont." 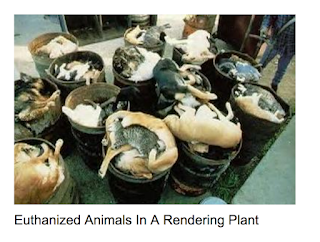 We could have told Best Friends to save the ink. Hill's Science Diet is one of Houston SPCA's most loyal donors and also the owner of one of the nation's largest rendering plants. "Most pet food companies are owned by global conglomerates such as Procter & Gamble, maker of Eukanuba and Iams, Colgate-Palmolive, maker of Hill’s “Science” Diet, and Mars, which produces Cesardog foods."

Houston SPCA is a privately funded 501(c)3 with over 20 million dollars in tax-free revenue:

The Houston SPCA will kill all of the pit bulls. That is a fact. They have it down to a science, just like the Science Diet pet food which renders pets into pet food.

Please be aware of the goings on behind the doors at Houston SPCA where pit bulls are all killed. These pets cannot speak for themselves. We must, as caring humans, speak for them. It is our duty. 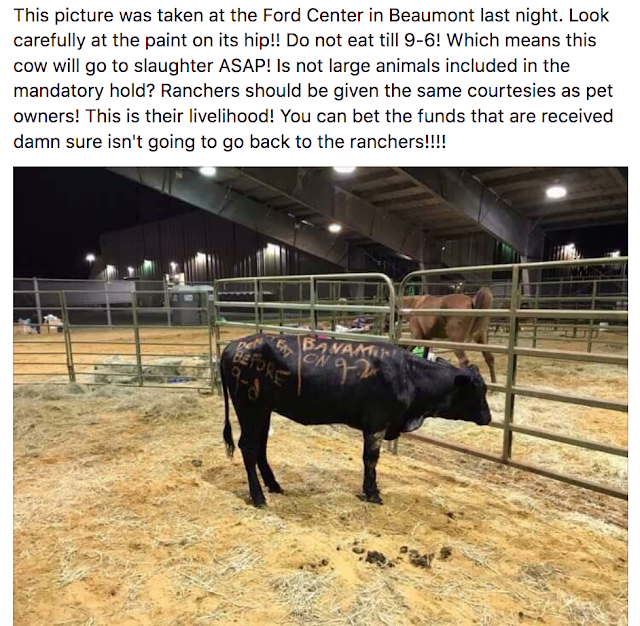 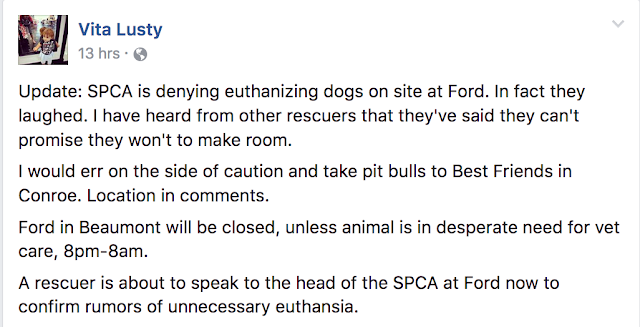 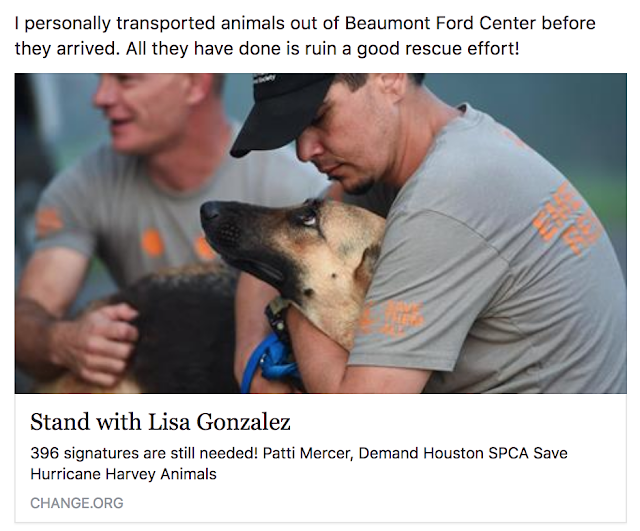 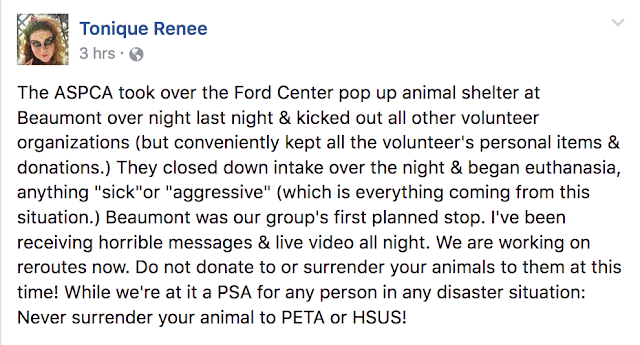 Posted by Pit Bulls and Other Animals at 7:05 AM 9 comments: