Today was horrible. Yesterday was spent trying to save a three month old puppy called 'no name' at Salinas Animal Services. We'd collaborated with the wonderful vets at the Newport Beach Veterinary Hospital who were going to nurse him back to recovery and then work with us to find him a forever home.
We received an email this morning from Salinas ACC transport coordinator who informed us she was taking 'no name' into her rescue. After losing Fancy yesterday due to human error at Salinas ACC, we were skeptical and with good reason. We were finally able to get through to Salinas ACC tonight after calling all day long. The puppy had been killed and the coordinator caught in a bald-faced lie.

Twice in less than 24 hours, Salinas has killed dogs, both with accredited rescue groups trying to save them. Fancy, a beautiful Rhodesian Ridgeback/APBT mix was being rescued and fostered to a well known local behaviorist/trainer. Our trainer arrived at the shelter, excited to get home with her and begin her new life. Reunion Rescue was working with these dedicated people to help network Fancy as we have had lots of Rhodesian Ridgeback/pitties, all of whom are in great homes. This mix is very popular in the bay area. The behaviorist was told Fancy was dead. Sorry, they had killed her by mistake.

Both Fancy and little 'no name' are dead tonight. We cannot do anything to bring them back. We have been receiving much support from all over, but a couple of the locals who have dealings with this shelter have warned us to back off, to not rock the boat or 'it won't be good for rescue'. Killing innocent animals is criminal enough, but to use the animals in these shelters as some sort of sick bartering tool is worse than wrong. In fact, it reeks of the kind of evil Salinas native John Steinbeck spent his life writing about.

Steinbeck said “I believe that there is one story in the world, and only one . . . . Humans are caught—in their lives, in their thoughts, in their hungers and ambitions, and in their avarice and cruelty, and in their kindness and generosity too—in a net of good and evil... and it occurs to me that evil must constantly respawn, while good, while virtue is immortal.”

What happened to Fancy and 'no name' is inexcusable. Whether or not the shelter erred, two animals who had a place to go are lying cold and dead tonight. Until these shelters begin to respect these animals as living beings, our work is not near done.

Please consider joining our group NoKillCali. We are a group of caring individuals who wish to put an end to needless suffering and death.


Live Chat Software
Posted by Pit Bulls and Other Animals at 6:12 PM 3 comments:

Benny, the Turlock Mange Doggy is Safe...UPDATE and STORY....

Benny was pulled by Reunion Rescue from Turlock Animal Control Tuesday 1/4/11. Benny had given up on life and was waiting to die. The shelter was going to put him down the next morning if he was not pulled that night.
Sam, five months pregnant, got dressed and drove to Turlock to save this boy. She transported him to the Bradshaw Vet Hospital in Sacramento. He will go home with Patti and Raven Friday 1/7/11 to begin healing. Benny will be treated homeopathically and through supplements and raw organic diet program which is posted on our website:

http://www.reunionrescue.com/id52.html
Benny is thought to be between the ages of three and four. He is thought to be a Shar Pei/Pittie mix. He has never known one day of kindness until he arrived at Turlock. This shelter, as so many of them, do not know how to handle these cases. The dogs cannot respond to antibiotics and most shelters only have an antibiotic protocol to follow.
Benny has broken teeth, was starved, beaten and had cigarettes put out on his ravaged body. He was eating his own feces. It hurts Benny to urinate. When he gets better, he will need dental surgery. For now, we just need Benny to eat and feel loved.
We spoke with a very nice man at the vet today. The first night, he was pretty bad off, but given fluids. By yesterday, Benny was actually hungry and ate on his own. The young man told me Benny was good and hungry today. He said Benny was adorable and also told me Benny had a good poopy. Good poop is good news when dealing with a dog in Benny's condition.
We will be updating Benny's progress with pictures and news about his treatment and response on a daily basis.
Thank you everyone who had a hand in saving Benny. He is a precious boy. He is a survivor. He is going to live and thrive and help lots of other dogs learn about healing naturally. Benny and Reunion Rescue are hoping for the day when other animals won't have to hurt ever again.
Donations can be made for Benny's recovery to:


http://www.reunionrescue.com via the Paypal button or by snail mail to:

Please consider joining Reunion Rescue's Facebook Cause to follow Benny's recovery and to help us try to help others.

Live Chat Software
Posted by Pit Bulls and Other Animals at 11:43 AM 8 comments:

Time for a Change....Animal Abuse Registry

The country is seeing a difference of opinion in the way animals are being treated. Suffolk County, Long Island has created the nation's first animal abuse registry which will operate much like the lists which track sexual offenders. This online resource requires all convicted animal abusers to register or face prosecution.
Other states are taking a look at this suburb's attempt to quash cruelty to animals. According to the New York Times, at least 27 states already allow courts to bar abusers from owning or even coming into contact with pets with three other states consdering similar legislation. 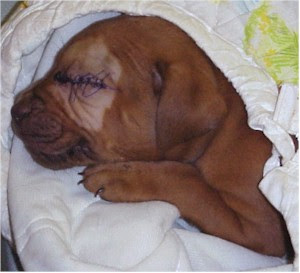 Arguments that animal abusers move on to crimes against fellow humans is providing motivation to effect new law. Until very recently, limited resources prohibited legal recourse for criminals. A nationwide list of offenders will provide communites, rescues, shelters and law enforcement officials beneficial support to combat wrongdoing against animals and their people.
Pit bulls represent many of the abuse cases due mostly to over-population and the element of people this misunderstood breed attracts. Animal cruelty is a disease that has no boundaries and is not specific to breed or species. A nationwide ban on inhumane treatment of all animals is long overdue.
"The greatness of a nation and its moral progress can be judged by the way its animals are treated...I hold that, the more helpless a creature, the more entitled it is to protection by man from the cruelty of man."
Mahatma Gandhi 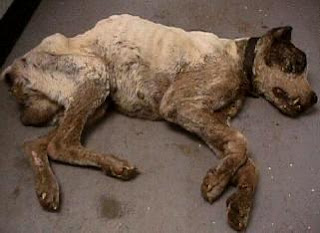 
Live Chat Software
Posted by Pit Bulls and Other Animals at 8:44 AM No comments: