Pip is home for the holidays

Holiday is in the air allright. I drove to Whole Foods to meet Pip's new dad, Brett with a crate and to pick up some marrow bones for the dogs. The lights are all twinkly and stage is set to lure the crowds into Thanksgiving purchases and pave the way for Christmas. Ok, I went for it, too. I got some Rice Nog and gingerbread cookies.

We are sitting here right now eating Chef Boy-Ar-Dee pizza in a box like I used to have as a kid and watching 'To Kill a Mockingbird.' It's time for a trip down memory lane, but with new memories.

Amber, BeBe, Peanut and Nolan are just a chomping on their marrow bones. Of course, Amber ate all the good stuff out of hers and sat there waiting on something else, something better. She reminds me of me, always working that angle for a better deal. It's so hard not to spoil her.

It took six hours today, but I finally got all the Petfinder, Adopt-A-Pet and other sites updated with the dogs. I added Guido and Spuds to the Texas pages. I am so excited to get them here. I can't wait to see them and hug them, get them all cozy in their own crates with a bone to chew. 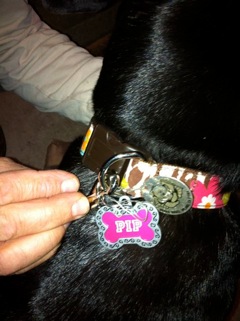 This is going to be the best Christmas ever, a season of trying to move past the awful things that happened last summer at Spindletop and look for new beginnings and healing. Amber is ready to go. I can tell she wants to meet her forever family. I wonder who it will be. Will it be a single lady who wants a gentle soulful companion or a nice man like Atticus Finch who would enjoy sitting on the front porch swing with a girl like Amber? Will it be family with kids who want a dog to share their childhood with, like Scout and Jem?

The families are the best part. You just know it when the adoption is right. The dogs tell you. Tonight, for instance, I could tell Pip was done with my part in her life. She gave me a tiny nose to my ear, or a passing nod in dog talk, but I'm thrilled. She is Brett and Jenny's dog now. They are a family. My job is done. We had a long time together, me and Pip.

When I snapped a couple of photos, the lights just shone around her, like the world was plugged in and Pip's own backdrop. She's made it and is very much loved. I have to hold onto that as there were some sad things today.

A momma dog who looks just like Pip is in the Modesto shelter with 10 babies. The chances are slim they'll all make it out alive. The three dogs who were living by the river near Sacramento and found by a deaf boy were all shot to death by a cop. While driving to Whole Foods, a tiny dog, maybe a little Papillon was running back and forth across the busy four lane highway. I nearly had a wreck trying to find him, but he dashed terrified down a dirt road and disappeared. I am hoping he had a home down that road.

Those are the memories which keep me awake. We are living in a horrible time. There are so many unwanted animals and so much sadness. In the movie, Atticus shoots a mad dog with the children and Cal watching. I'd forgotten about that part. I'll go down to BeBe's house in a minute and finish 'To Kill a Mockingbird' with her.

Tomorrow, we have a date to watch 'Gone With the Wind.' AMC is doing it up right this Thanksgiving with the movies. I wonder if the people who run AMC have dogs. They must, because the movies they're airing are dog watching movies. I can't imagine watching a movie without the companionship of animals. They're just better.
Posted by Pit Bulls and Other Animals at 7:09 PM No comments:

Last weekend was typical of rescue life. After transporting Quentin all the way from Lodi, getting him settled in his new home with mom Tara, new crate, starting a new raw diet, learning the Kong, attending his first Better Way Dog Training class with Bob Gutierrez, Tara's landlord changes his mind about her having a pet.

In tears, Tara called to say she didn't think it was going to be possible to keep Quentin. Now, even though we knew Quentin was in the perfect place for him, Reunion Rescue has a lifelong returns policy. We got on the horn and called out the troups. Jess and Jaime who're longtime Reunion adopters offered to foster Quentin while we seek that perfect home.

I knew exactly what Tara was experiencing. Inside, we are all that little girl with a mean man trying to take away the puppy. Who hasn't been there? Reunion has a saying, 'always walk out with the dog.' Here was an opportunity to put those words to work.

Since Quentin was now situated temporarily, we got busy again with the very complicated process of trying to ship Spuds, our blind boy, from Lodi here to Reunion Rescue No-Kill Refuge where we can treat his joint issues and eyes with raw diet and homeopathy. What the heck, we had one option with On Wings of Care who would fly Spuds, but with only Spuds and another dog, the cost of fuel between $1800 and $2000. We made a decision on the fly to go ahead and bring Guido, too. We are still looking for other dogs needing transport either from California to Texas or back to California from Texas. Each passenger lowers the cost which is split according to how many dogs are flown.

I called Bonny at On Wings of Care and told her to go ahead and pencil us in. By the way, I hadn't cleared it with my significant other, Scott, but figured I'd 'wing' it...literally operating on a wing and a prayer. I have learned over the years in rescue to just try and do the next right thing and we'll be carried. It always happens that way.

After all this was settled, I sat down with Scott and made him a proposition. Even though we're operating on overload right now, literally a two bedroom house operating as a de-facto shelter with no big money grants and free Toyotas...I drive an old '98 Jeep Cherokee that holds two crates on a good day. It was truly a hard sell.

I pitched it like this. Give me two days to try and make it work with Spuds and Guido. If it's too much and I can't pull it off, I'll either board Guido or find a foster home. He's a mush-melon of a staffie bully boy and very easy, just wanting to sit around and cuddle.

I can't believe it, but Scott caved in. I was honest about something else, too. I've been hoarding Amber. After what happened with Stella dying at Spindletop and all the horror surrounding the raid, Amber has been my little rock. We have held onto each other and made it through a terrible time. I haven't wanted to give her up. In fact, the thought of adopting Amber makes me cry. It's selfish on my part and against what rescue is truly about. She needs her own home and her own people. It is wrong of me to try and keep her.

So, I promised Scott I would revamp Amber's adoption link and really start trying to find her that perfect home. After this heart to heart talk, two things happened.

First, Brett who's fostering to adopt Pip with significant other, Jenny, texted me a photograph of Pip in her own home on her brand new plush dog bed. Pip was with me for four years and made it out of three very high kill shelters. She is truly a survivor and proof that there is a perfect home for every dog if we just believe.

The next thing blew my socks off. Tara called. She had been cuddling on her sofa with Quentin for 6 hours petting him and crying. In San Francisco, luckily, there is huge support for tenants and their companion animals. Tara had been doing her research and is securing documentation to keep Quentin. She asked if she could have one more week with him to try and make this happen.

Wow. All I can say is, wow. These events all pretty much happened without my doing. It's hard in my world to step back and let nature take its course, but geez, Louise, sometimes it really does work.

BeBe, by the way got Pip's old digs and has her own house with cable tv. We watched 'The Color Purple' Saturday night since Pit Bulls and Parolees were on Thanksgiving holiday. It's good to take the time to sit down like a normal person with their dog and just watch a tearjerker old movie. Wednesday, we've got a date to watch Gone With the Wind. BeBe has never seen it and I think she's really gonna like Prissy. I wish she was dog friendly so Amber could join us in her red satin-teen collar like Mammy's scarlet red petticoat, but we'll have to try that experiment another time.

Before I could explode, I got a sweet letter from Ken and Steaven who recently adopted Buster with a photo of Buster and his baby octopus. It keeps getting better and better.

I'm really looking forward to Thanksgiving this year. I am really blessed to have these beautiful creatures in my life and a purpose. I am grateful that Spuds and Guido will be joining us. I'm happy that Nolan is getting better every day, running in the yard. Peanut got BeBe's old crate spot and he seems a little more settled in his own protected area.

Last night, I broke out the Kong donation box I'd been attempting to have a half-ass raffle giveaway, and gave the prizes to Amber, Peanut and BeBe. They acted like they'd won the lotto, but the big winner is me.
Posted by Pit Bulls and Other Animals at 7:41 AM 4 comments: