Back in 2009, a last minute emergency notice came out from West LA shelter. A senior dog called Gio had been redlined and was about to be put down. Besides his age, Gio was sick and blind.

He'd been discovered walking down Pico Boulevard in Los Angeles. Most who walk down this street are shopping for a big Hollywood break, but all Gio got was a temporary cell unit at the shelter.


Several wonderful volunteers put together a video for Gio. He had a lot of people pulling for him, but Gio had run out of luck...and time. Reunion Rescue was full and broke, but what's new? Something about Gio just wouldn't let us hit the delete button, so we started looking for an opportunity.

A notice was put out on Streets of Bakersfield, our volunteer group which transports high risk dogs in California to safe refuge. Angel from Big Dogs Rescue did the first leg and met John McCaulay who carried many, many dogs to safety over the years. We lost John last Memorial Day when he passed away in his home.

A nice couple offered to foster Gio and he was transported safely to their home outside Santa Cruz.....with the Eddie Vedder song ...... I got the feeling that I just can't lose...pulling into Santa Cruz.....

It was a great day....I pictured Gio pulling into Santa Cruz...the ocean breezes blowing on his beautiful face. He was a symbol for those of us in rescue. We can't save them all, but sometimes we go out on a limb, take a chance, step off the ledge and the universe is there to catch you.

It was rocky at Gio's new foster home. He was there for a few months. They changed his name to Jack and we got him into an opthamology vet who prescribed eye drops and meds that would relieve some of the horrible pain poor Jack had suffered his whole life.

The resident dog, a cattle dog, never liked Gio-Jack and picked a bunch of fights with him. We had nowhere else for him to go and the dogs had to be separated. Amazingly, our Jack never responded to the attacks. He just wanted to be friends with everyone and everything. 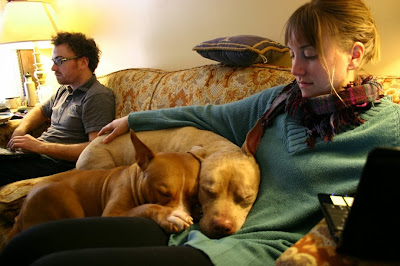 Two very nice people, Marisa and Mike, contacted us about Jack. Marisa's dog, Fiona, was very dog selective, but they'd seen Jack and wanted to take a chance. Fiona was all for it and it was instant love. Marisa and Mike fed Fiona a vegan diet and she obviously thrived on it....and so did Jack.

Jack was renamed Carmine and found himself in a very loving home. He got around by following the jingle of Fiona's collar. Marisa, Mike, Carmine and Fiona relocated back east to Connecticut and for the first time, this Southern California boy enjoyed snow and cozy winter life. 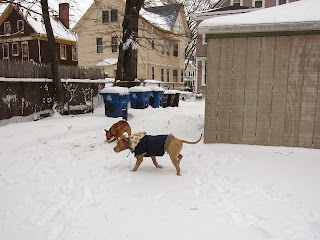 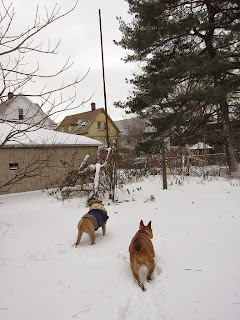 Life gets away from you in rescue. There are so many who need us to help them and not enough of us to help.

Carmine enjoyed a loving life, even though he had to wait so long to find his forever home. This year, Carmine passed away in his loving family's arms. He was diagnosed with an inoperable brain tumor which began to cause him much anxiety and great pain.

He is remembered as an extraordinary dog who brought many people together. He went from being red-lined in LA to the lovely beaches of Santa Cruz and then all the way to the east coast. Everywhere he went, Carmine taught everyone he encountered to enjoy the moment and live each day as if it were our last.

Goodbye, Carmine. I never got to meet you face to fact, but I will someday. I know you are there with my Girl, with Rebel and Junior, Mookie and Madeline, with Hope and Frenchie and all the other Reunion Rescue dogs saving me a place.....pulling into Santa Cruz..... I need the beach to set me free...I need the wind to let me breathe.  I need the water to wash my soul...I need my loved ones to let me go...


Posted by Pit Bulls and Other Animals at 8:58 AM No comments:

BSL results in DOA for another pit bull shot by cops 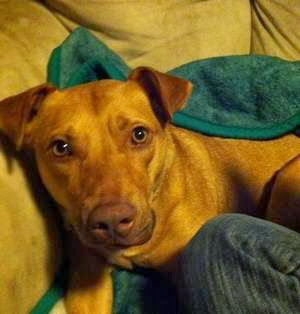 St. Clair Shores: Police shoot and kill yet another pit bull. According to a story in the Detroit Free Press "St. Clair Shores police officers shot and killed a pit bull mix Friday morning, saying the dog menaced several people and then charged officers who attempted to capture it."

The reader doesn't need to travel far to find out what really happened to Lexie, an 18 month old dog who was brutally shot by a cop. Stated near the end of the Detroit Free Press article, was this description:

"Preston lives at the home with her grandfather, Tom Warunek, who witnessed the shooting. He said three officers came to his door. “He said they were going to shoot the dog,” Warunek said. “She wouldn’t come in, and then he took one shot and it’s right in front of me on the side porch.”

"Warunek said the dog squealed and ran into the bushes, where the officer shot it several more times and watched the animal die."

So, the office needed to shoot Lexie several times while she was bleeding to death in the bushes? Who was he protecting....the shrubbery?

Lexie was owned by 19 year old Brittany Preston who lives with her grandfather. Preston's grandfather witnessed the gangland-style killing of an animal.

The name of the officer who shot and killed Lexie is unknown. Lexie was saved by Brittany Preston when Lexie's family moved to a county which practiced BSL and does not allow pit bulls.

Shame on the cop who shot Lexie over and over while she bled to death.