I lost my temper and don't mess with Texas

Polar was a beautiful deaf American Bulldog killed by ? in Virginia. Can't seem to get a clear answer from anyone. From the governor's office on down, every caller is told 'you'll have to speak to animal control.' And animal control ain't a talkin'. 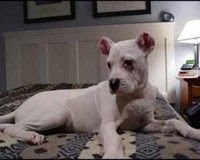 From what me and the other average citizens are able to put together from news reports, here is the official story. According to NBC 12, "After a thorough police investigation and consultation between the Commonwealth's Attorney's Office and police, the Commonwealth's Attorney's Office has determined it will not seek charges in relation to the June 29 death of a 6-month-old male.
The Medical Examiner's Office has confirmed that the cause of the child's death is a cerebral edema due to a dog bite to the head.
The dog involved in the death of the child, an American Bulldog named Polar, has been euthanized."
Here's the main part of the problem, a thorough investigation? From and by whom? The same people who from the governor's office on down to the way down, animal control, refuse to answer any questions including how to spell their own names.
I know, because I made it my business to call every one of these offices today. I had one question...did the baby die of edema immediately in the home or later in a hospital? If so, I for one would like to see proof the bite was indeed inflicted by the dog Polar. That's all.
This was the second round of calls I made in relation to this case. The last round was made on behalf of Reunion Rescue, my pit bull rescue, offering to take Polar into sanctuary for the length of her entire life, to live in respite and never to be adopted. I spoke with every office (each one hired by the good people of Virginia) and left my number and name along with my 501(c)(3) information. Nothing. I didn't even receive a return phone call from the paid media liason, Elizabeth Caroon....not sure of the spelling as none of the secretaries either could or would spell her name for me.
I left the liason another message today, however, moot since the dog has been slaughtered. Hope she's having a nice lunch or paid vacation.
Next I get ahold of Captain Brian Smith. He absolutely refuses to spell her name or even give me his name. I am only asking for information provided by the medical examiner report which, correct me if I'm wrong, but should be available for public consumption via the Sunshine Act..."The Government in the Sunshine Act is a US law passed in 1976 which affects the operations of the federal government, Congress, Federal Commissions, and other legally constituted federal bodies. It is one of a number of Freedom of Information Acts, intended to create greater transparency in government."
By this time, Cap'n Smiff done hung up on me.
Like I tell folks, ain't no accident I rescue pit bulls. I'm just getting started. I call the governor's office and get ahold of Net.....who proudly served me a slice of attitude pie...which I promptly refused.
I call the county attorney's office and get Susan and the same old story. "No comment." I am suggested to refer to animal control who ain't talking either, by the way. I'd like to know what animal control knows about edema? Do they have a forensic investigator on staff?
Lastly, I get Ms. Jessica at Kozak the asst. county attorney's office and who's billed as handling animal control issues. Boy, did the fangs and claws come out with this one. Now, correct me again if I'm wrong, but are not these people paid and appointed employees?
This dog was owned by the Commonwealth, the same entity that underwrites the motley crew I've had the pleasure of dealing with today.
Now, I get about 2500 emails a day. I write articles and try to save as many as I can by crossposting, telling stories about and rescuing through my own organization. The entire time I'm speaking with these individuals, I'm personally diverted from helping other animals in need.
The way I see it, every one of these people had a hand in killing Polar.  Additionally, every minute of my time wasted speaking to Jessica and Susan and Net was time that could have been toward helping an animal in need.
When Jessica became condescending, I pretty much lost it. Better than most, I realize losing my temper is not going to save a life, much less a life they've already taken. But, sometimes, all the death and all the wrongness and the smugness are too much for even me to handle. In a case like that, I give myself a perk and let myself take the low road. Today, I took the low road and told Ms. Jessica where to stick it.
I feel sorry for the dogs and animals in Chesterfield County, Virginia. It is a bad place. It is a place where due process is not served. It is a place where animals do not have rights.
The couple whose baby died were not even in the same room. According to reports, the baby was supposed to have been confined in some sort of jumping chair alone with the dog. Every detail must be pieced together as the officials are keeping mum. Perhaps they have something to hide? 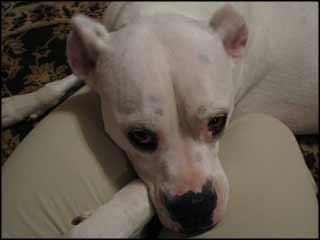 We who tried to save Polar will continue to seek the truth. There is a save Polar petition. I signed the petition after Polar was killed. I signed it for Polar. I signed it for Michael Vicks, a proud Virginia businessman who got a much better deal than Polar, right Nike? I signed it for Casey Anthony, who got a great deal for herself. Much better than Polar got. I signed it for all of the good people in Virginia who are being represented by foul and selfish officials. I signed for all of the dogs and animals we don't know who are being slaughtered with no voice in shelters across the United States.
I ask that everyone who reads this take a minute to sign Polar's petition. Sign it for Polar who got a raw deal. This dog should not have been killed.
http://www.thepetitionsite.com/5/Help-save-Polar/
Please visit Polar's Facebook page. This is not over by a long shot and that is a promise.
http://www.facebook.com/pages/Save-Polar/223799790985693?ref=ts