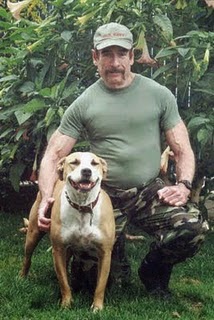 Day before yesterday, I got an email from Ken A. Ken was the third daddy of Angel Divine, the dog who started Reunion Rescue.

Angel came into my life in 1998. We were living in San Francisco. Scott found her wandering around and would let her play with our dogs, Mookie and Rebel. I'll admit, I didn't like it. I didn't like pit bulls. I believed everything the media reported about these dogs.

One day, Angel came up to my gate. She was covered in blood and limping. I put her inside the front garden and got her some water. I began to make some calls and got my own wake up call very quickly.

San Francisco didn't have a pit bull resource at the time. I had called the big fancy no kill SFSPCA to get a load of rhetoric to the effect they pulled dogs from SFACC. SFACC, the city animal control, had a 1994 adoption pact with SFSPCA providing the SFSPCA would take any and all adoptable animals. This was false then and has not changed to date.

SFACC picked up Angel and she was at the pound for two months. To her credit, Angel was such an exemplary dog, she made it over to the adoptables side...at the time, they had a pit bull room, and sat there waiting for someone to find her and save her.

Enter Marty. Marty had lost his rottie and was coming by SFACC to visit the dogs and perhaps adopt another pet. He met Angel and despite the fact that she was a pit bull, he fell in love. It was hard sell and took him about 6 weeks, but he realized he couldn't live without her and adopted her.

I continued to call the shelter throughout Angel's incarceration. There was even a note on her computer file reading, "a woman named Cindy keeps calling." When I found out she'd been adopted, I was ecstatic.

The full story of Angel and Reunion Rescue is told in Pit Bull Nation. I went on to volunteer at SFACC photographing the cats and dogs and writing bios for the website. Angel went on to become the Sweetheart of SOMA.

Marty passed away a few years ago and his partner, Russell moved with Angel to Phoenix. Angel and Russell found a new life and new love when they met Ken. Ken's first words when he met Angel were, "that is a pit bull!" However, as she'd done with me, with Marty, with Russell and with SFACC, Angel changed his mind.

We kept in touch over the years. I'd get the most adorable photos of Angel dressed for Halloween and on a kid's airplane ride at the carnival. When I was putting the finishing touches on Pit Bull Nation, I wrote to Russell several times to let him know about Angel's chapter with the wonderful photo with Marty included. I didn't receive an answer.

After the book was published, I got an email from Ken. Russell had passed away. Losing Russell had been devastating, but he told me Angel had helped pull him through the whole experience. She had been a rock for him to cling to when there seemed to be no reason to go on.

Day before yesterday, Ken had to put Angel down. She'd become incognizant and could no longer stand up. It was her time to go.

People who don't love animals do not understand the emptiness and despair one goes through when a companion dies. To me, the worst is carrying on through life's mundane chores when a memory of a smell or habit suddenly appears. It might be something which always seemed irritating at the time, but now that they're gone, horrible to endure remembering. Like a Nina Simone song.

Day before yesterday, we also lost Sweetheart. She was senior chow chow I pulled from the Big Bear shelter near Devore. She was incontinent at the shelter, but I just knew we could fix her with herbs and homeopathy.

Once she got to Bakersfield, it took a week to get her to Lodi. After she reached Cyndi's in Lodi, she began to perk up. She became Spuds' seeing eye dog, as he is blind. Sweetheart was a senior girl whose entire life had been fraught with substandard diet and substandard care. She was estimated by the vet and shelter to be about 17 when we pulled her. Sweetheart enjoyed the sunshine and making friends with the other Reunion Rescue dogs at sanctuary. She passed away in her sleep.

It's so sad to lose a pet. I know if we could have gotten to Sweetheart earlier she could have enjoyed a longer life, but have to tell myself at least she died with dignity and painlessly while enjoying a good healthy raw meat diet and friendship with other beloved dogs in our care. Sometimes that is all you can do.

What I can do is concentrate on the others. There are so many. We have Hazel and Diesel, Spuds and Guido, Holly Berry, Pearlie Girl, Bliss, Dexter, William and all the others. We're full in boarding and empty at the bank. The shelters are overcrowded and people are still bringing dogs and cats in droves.

What I can do is work hard and raise the money to start Reunion Rescue's No-Kill Refuge. That's what Sweetheart would want and what Angel Divine would want. They and all the ones before them had a paw in the effort.

I am so grateful today for being blessed to have known Sweetheart and Angel and most honor their lives with positive effort and strength. Today, I will put one foot in front of the other one and trudge forth. There might not be a Reunion Rescue No-Kill Refuge today or tomorrow, but I can promise you, there will be one someday.

Posted by Pit Bulls and Other Animals at 11:23 AM No comments: