Posted by Pit Bulls and Other Animals at 12:27 PM No comments: 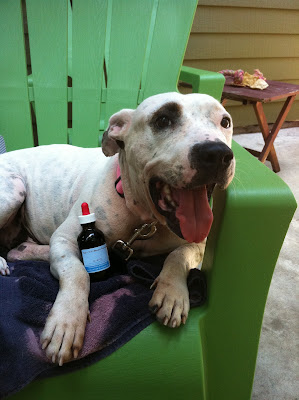 Every day, I get hundreds of emails regarding pit bulls and other animals with or without issues being put to sleep. To somebody like myself, this news is sheer insanity! Imagine hearing the same issues over and over and over with remedy and solutions so close within reach.

Let's take the story of BeBe for instance. BeBe was previously Batgirl, beaten severely with a baseball bat  and sentenced to die at Town Lake Shelter in Austin.

I adopted her personally, not being a partner with Town Lake now known as Austin Animal Center. At the time, Reunion was full and I had to board BeBe at what I believed to be a reputable pit bull facility, Spindletop.

A year and a half later, Spindletop was raided and I was lucky enough to get BeBe back. She was ten times worse than the dog I'd entrusted to them.

I've long been using the products from Robert McDowell Herbal Treatments to support various issues in the dogs and cats we've rescued over the years. We've treated issues from kidney failure to parasites with great success. It finally dawned on me to try herbal support for behavioral issues.

One thing Reunion Rescue does with every pulled animal is an immediate detox. Most domestic pets are extremely over-vaccinated. The longer I am involved with pulling these shelter animals, the more I'm convinced that most if not all problems stem from vaccine. What the average Joe doesn't know is a domestic pet who's received one vaccine has a 1 in 800,000 chance of contracting rabies. Never in history has rabies shown up in a pet who's received two vaccines. Then why on earth are we vaccinating our pets year after year after year? Again, insanity!

I'd learned Bebe's herbal tinctures had been thrown out by the proprietress of Spindletop, so when BeBe arrived here at Reunion Rescue No Kill Refuge, she went through a complete detox and began on Australian Bush Flower Essences Emergency.

I contacted the wonderful people at Robert McDowell Herbal Treatments who gave BeBe remedy and tincture specific to her needs. Along with a healthy raw meat diet, BeBe slowly, but surely began to change.

BeBe sustained severe damage to her head from the baseball bat beatings. In addition, we'd learned she had been abused and kicked repeatedly in her head with steel toed working boots. She suffered from headaches and her vision in the left eye had been compromised.

In addition to her daily tincture, she was dosed homeopathically. The remedy selected for BeBe worked! She was pain free in a little over a week and the homeopathy remedy was halted.

When BeBe arrived here, she couldn't sleep through the night. She woke up with night terrors and would screech over and over until she could be calmed enough to resume her sleep. Today's BeBe is a totally different dog. She smiles. She is a happy dog. She loves to play and dig. She loves her chews. She loves training and to sit for her cookie.

Imagine if pet owners used flower essences for their 'problem' pets. Imagine if the nation's shelters were to simply drop some Australian Bush Emergency essences into the daily water bowl. The shelter animals would be calm and not barking hysterically when potential adopters walk through the kennels.

BeBe's problems were some of the worst I've encountered in all my years in rescue. There were some moments when I thought BeBe was not going to ever get better. She taught me to not give up on her and what a blessing she has been. She has taught me a lot about dogs, about animal behavior and mostly about love.

Peanut, William and Guido are also receiving daily tinctures from Robert McDowell. Although their problems were not nearly so severe as BeBe's, they each needed something to help their confidence and  help them smoothly segue into the life of just being dogs.

Each day, I'm more and more amazed at the sparkle I'm seeing in the eyes of these animals. One of the main complaints I hear is the old 'I don't have the time for ....' routine. I have a refuge full of pit bulls, each crated with a job to do and routine yard time each day. I've spent the greater part of my rescue life trying to explain to people their dogs want to be with them, not sequestered out in the backyard.

None of the dogs here at Reunion Rescue No Kill Refuge are 'problem' dogs. After a couple of days on raw meat diet, some herbal support and detox, every dog has settled into a routine. In fact, dogs which had come to me severely over-crated and stressed, run to get inside their crates! The reason is because they have a job to do in the crate.

Each time a dog returns to his or her crate, there is something new and fun to do. Whether it's a frozen marrow bone or one which has been re-frozen with cottage cheese and pumpkin, a rawhide or weiner-stuffed Kong, there is a surprise waiting for them.

They feel safe and confident in their crates and to most of these dogs, this is quite a foreign experience. These dogs have been mistreated and abused. We've tried to simulate the wild as much as possible through diet and habitat, but mostly, first and foremost, we let them each know they are extremely special and very much loved beings.

Most of the pets people contact me about are not such severe abuse cases, but simply dogs who once past the puppy stage, have become bored and problematic for their stressed owners. The very easy and simple resources on our website can fix any dog.

Posted by Pit Bulls and Other Animals at 11:10 AM No comments: