One from the heart....William comes to Texas

It's been a long haul for me, Reunion Rescue and William, Guido and King James. We have been blasting their transport far and wide and are finally happy to report all three arrived safe and sound day before yesterday. Just getting an opportunity to sit down and catch up the details. I don't want to leave anyone or anything out.

Thanks to Lee Kinsel, all three were safely transported from Lodi to Palmdale Thursday night to leave the next morning on ground transport. Our good friend Angel at Big Dogs Rescue where Pip was boarded hooked us up with a private party attending a dog show.

The trip wasn't without a few bumps in the road. William, who's thought to have been overly crated during his boarding, became amped when anyone approached his crate. This behavior couldn't be allowed on the road with a dog show in the works. Thanks to Suzanne, a local dog trainer, William was worked with and caught a ride to Yuma to meet the others Monday morning.

After putting the pedal to the metal, the transport arrived at our meet up in Brownwood, Texas and I was able to see these beautiful dogs for the first time...in the flesh! William was the first off and practically jumped into my arms. The same dog I'd been told was 'a biter' and sent back from his potential adoption with all kinds of nipping reports turned out to be a mush melon, just wanting a little attention. 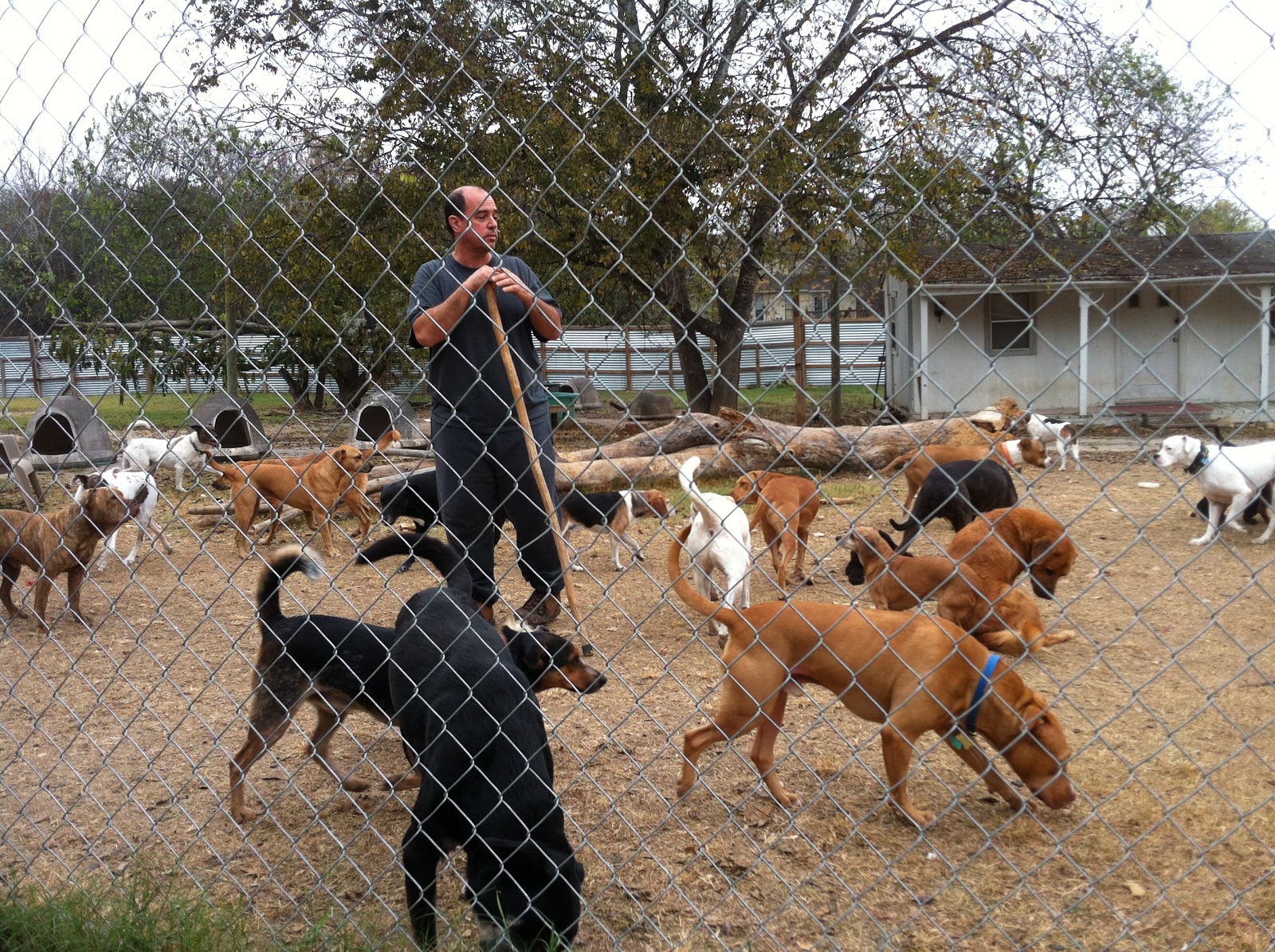 Doug, our wonderful foster care sergeant at arms, had stepped up to the plate to take in William so he could be given the exercise he so desperately needs. More on Guido and King James later as this blog is all about William.

First, much dog training suggests  to refrain from too much coddling with a dog like William. William has taught me yet another important dog lesson. With him, this sort of modification was ineffective. With William, I got a little spark of enlightenment. As we humans need to feel important and needed, this was William's case. He is an individual and a sensitive soul who's desperately been seeking someone to guide him. How simple and precious is that?

When he met me for the first time, it was an experience I'll always remember. He knew I was there for him and I got it. The nipping everyone was so worried about is William's way of communicating. Not appropriate, of course, but that can be dealt with later. His way of 'talking' to you with his mouth is akin to a tap on the shoulder we humans use to get someone's attention. Nothing more, nothing less.

By late Wednesday night, everyone had been settled into crates. Of the three, William was the easiest by far. The next morning, we set off for Doug's.

Met at the gate by the pack and day-care customers, William was a little apprehensive, but put on his big boy panties and a brave front. Doug came out to the greeting area and it was a 'love at first site' moment. William really likes men and Doug immediately got William.

After a few moments of settling in, the introduction began. First came Buddy, remember Buddy Johnson, Pet Detective? Buddy is Doug's stand-up introduction dog, something like the Walmart greeter. I was reminded of that special day when Raspberry first went to Doug's and met Buddy for the first time. Who ever would have dreamed she would become one of Doug's own dogs and run and play with Buddy and the rest of the dogs every day?

I must say, William's intro went near flawlessly. He would get a little nervous from time to time meeting all the dogs, but exhibited excellent dog language and like a musical note in a symphony of dogs, would move accordingly. If a dog came on a little strong, William would back away or offer his hindquarters for a sniff.

When the time came to open the gate, it was truly a magic moment. William has beautiful lines, those of a classic American Pit Bull Terrier. He's not too short and not too long, not too beefy, but just perfectly formed. He's a lovely dog to watch.

Perhaps the prime instant was that thing that happens in rescue when it all comes together. All the heartache, all the worry, all the dashed hopes seem irrelevant when 'it' happens. When the dog runs over to you and gives you that obligatory and hurried lick and runs back to their new person, it's as if they are saying, 'you done good.' William did that three times, just to let me know everything is going to be ok. He feels very safe with Doug and the nearest this precious dog has ever been to true happiness.

This boy, who'd been starved almost to death, thrown on a lit bar-b-que grill and drug behind a car before being thrown away at the hell hole known as Stockton shelter, had the best day of his life yesterday.

I pulled myself away to run a few errands before heading home to the crew here, but got a call from Doug on the way. William, who wouldn't eat a bite for me, had just scarfed down a pound and a half raw chicken, liver and beef tripe without a second glance.

He went right back to his new job of playing all day long. Doug says his favorite feat is to get a running start and dive into one of the dog swimming pool, run around a minute and do it again. William is one of those dogs who will go and go before realizing his get up and go has gotten up and went.

By 7 p.m. he was whipped, like the man says, dog ass tired. He found a special place to bed down and passed out hard till around 10:30 when Doug had to wake him up to go potty. He came back and slept through the night.

Welcome to Texas, William. You are like the great men who created this great state. Through much strife and trials that would do in a lesser man, you remained brave and looked toward the long road ahead with hope in your eyes. It paid off, bubba. You're on your way.
Posted by Pit Bulls and Other Animals at 11:21 AM 1 comment: 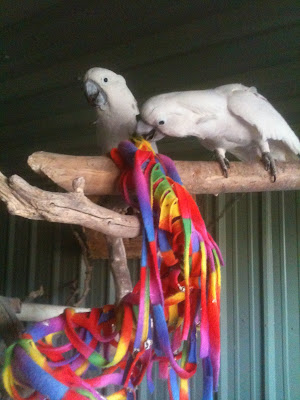 Reunion Rescue has a longtime relationship with Wildlife Rescue and Rehabilitation in the beautiful Texas hill country.

Our own little bird rescue and sanctuary had some big toys gathering dust, so when we contacted WRR, they were happy to put these items to use.

WRR does fine work and even rescues the occasional pit bull. 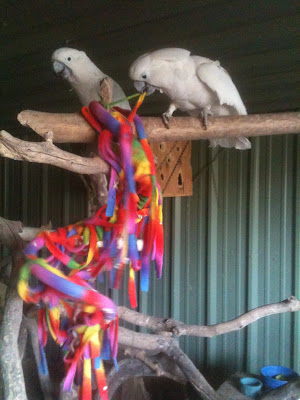 Back in the day, we made the bi-weekly wildlife run from San Antonio to WRR with injured and helpless wildlife. This group turns no animal away and is home for everything from turkey vultures to cockatoos, capuchin monkeys to pigs and lions.

Our hats are off to a group that walks to walk in rescue matters.

WRR is committed to rescue, rehabilitate and release. Their commitment and ability to mimic wild environment is amazing to behold. To lower stress and address these animals' needs, WRR uses calming scents, dim lights and homeopathy. If more of the country's animal shelters put these efforts into practice, just imagine the benefits.

Thank you Wildlife Rescue and Rehabilitation for the fine work you do helping animals.


Posted by Pit Bulls and Other Animals at 4:03 PM No comments:

Just as I got all the photos up and running along with a dedicated song for each Reunion pit bull, the whole thing came crashing down. I clicked the link and nada! I lost everything that had taken weeks to create. 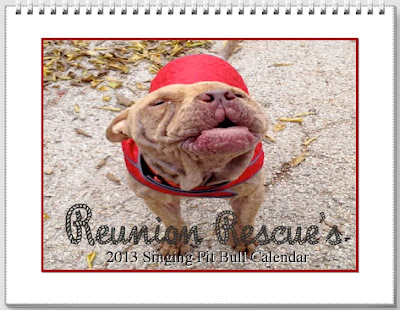 After sweating a ton of bullets, I did what every self-respecting pit bull rescuer does. I started over. That's one thing I've learned from these wonderful dogs. Life comes at your sideways most times and the best you can do is dust off and go at it again.

Amazingly, I was able to get the calendar up and running in just a day.

This year's calendar features Reunion pit bulls who have something to sing about. Some of our dogs like BeBe were pulled from the horrors at Spindletop while other longtimers like Pip and Bruce Willis found amazing forever homes.

Guido Sarducci, King James and William are on their way to Texas to join us at the Reunion Rescue No Kill Refuge, the only holistic raw feeding sanctuary and refuge in the world.

Take a look at our little songbirds like Toot Toot, Peanut, BeBe, Amber, Nolan, Bruce Willis, Casper, Benny and the rest of the gang yodeling their little hearts out in the calendar.

All royalties from calendar and other product sales go 100% toward saving dogs at Reunion Rescue. No salaries, no mortgages, no trips, no parties..just saving and caring for the animals.

To order the Reunion Rescue 2013 Singing Pit Bull Calendar, click the following link and help us save the world, one pit bull at a time: 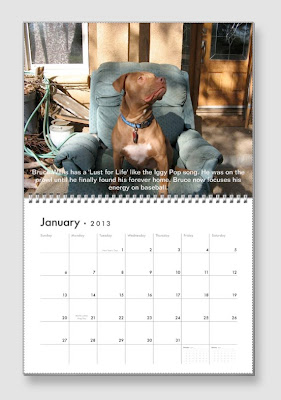 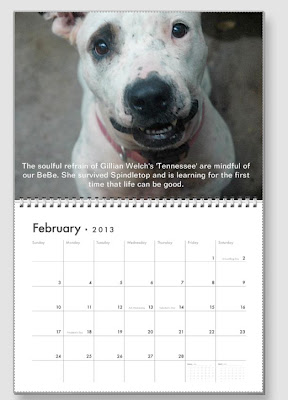 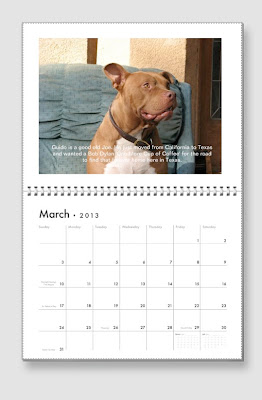 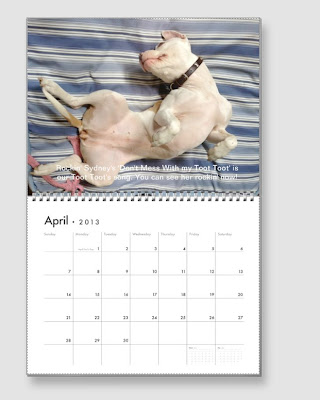 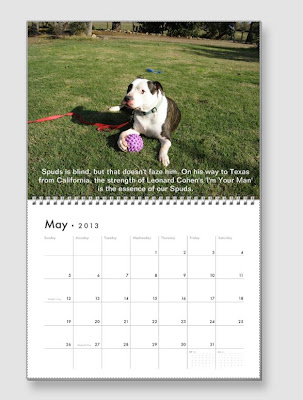 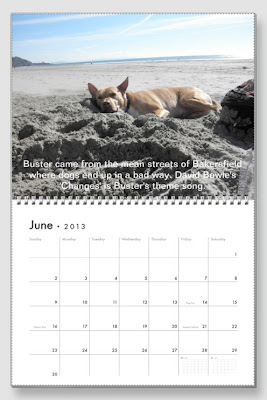 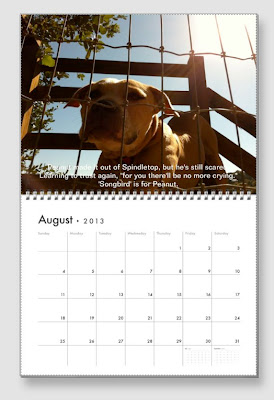 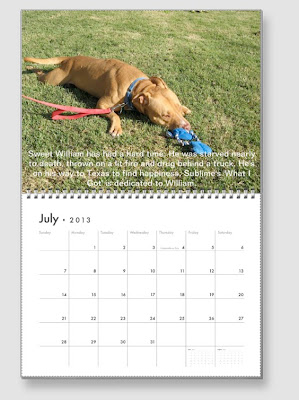 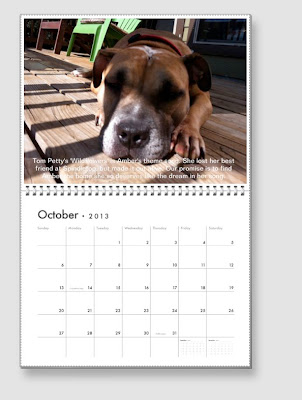 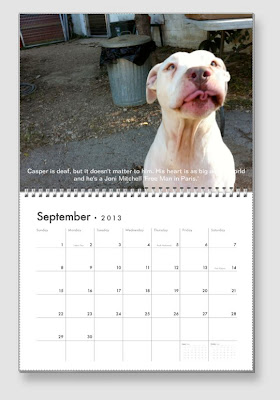 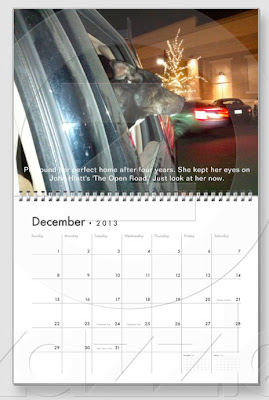 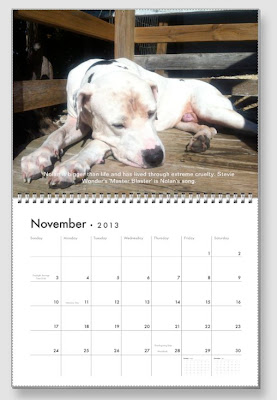 Posted by Pit Bulls and Other Animals at 7:06 AM No comments: