To a wonderful Strut Your Mutt in the San Francisco bay

Today was one of those magical days I'll remember for the rest of my life as one of the best days ever in Reunion Rescue's history. Here is the beginning of a work in progress...keep in mind this is only part one of the day...I'll be uploading more photos shortly ... so keep tuned in!!!

From cloudy to sunny to pouring rain, the Reunion Rescue crowd turned out at Best Friends' first ever San Francisco Strut Your Mutt. Reunion Rescue adopters and supporters began to turn out and didn't let a few showers crowd the fun for these wonderful pit bull lovers.

Captain Adena Blount and her son Reed showed up to kick off the show....

Jerzy and Norm showed up with Hank and Lily. They have certainly proved the shelter wrong who said they couldn't handle Hank...today celebrates 13 years of their adopting Hank and they brought neighbor Lily, Hank's purty girlfriend.

Duane and Lenny hopped into the mix for a photo op. Duane adopted Sam (Carl) years ago when he was going to be put down for having a terribly fractured leg.

Thanks to Duane, Carl was saved and we raised the money for his surgery. Duane adopted Lenny a few years later and life was great. Duane recently lost Carl to terminal illness.

Hazel from Baldwin Park showed up with her mom Joan and Joan's daughter, Cindy...gotta love that name!

Many long years ago, Steaven and Ken walked their puppy Benny with Reunion in the Pride Parade....Benny was one of the first Reunion Rescue adoptions and lived a long and very happy life. When Steaven and Ken were ready to adopt another dog, they called and we delivered...

Buster came from the Bakersfield nine we pulled from KCAC....he was the last one unadopted because he was too 'shy'...well he's turned that shy act in for a smile and here's hoping he's gonna share that smile on many more future struts.

When Delta was Pearlie Girl, she'd been pulled by another rescue from Martinez Shelter. She wound up on Craigslist and when the other rescue didn't respond, we negotiated and got her into boarding. Little did we know it would take almost two years, but Delta found her real forever home with Heather and Gene and their precious girls. It was worth the wait. If only there were a million more perfect homes like this one and all the homeless dogs could be happy ever after like Delta.
There are no words....but we miss Maddie. Todd and Darren adopted Madeline a long time ago and we all walked in Pride Parade. Maddie passed away last year and broke her daddy's heart. We remembered Maddie and the other ones we have loved and lost in our Hope's Memorial Walk this year.


Davika was a little rat terrier who'd been horribly abused her entire life and was waiting to die at Martinez Shelter. Reunion saved her and she had to have surgery for tumors and dental. She was an older girl, but Rudy adopted her and gave her the loving life she never knew in the years before we found her. She passed away in Rudy's arms after enjoying an extraordinary home with Rudy and Boom Boom. She cut a swath on their many hikes and travels and had her own blog. 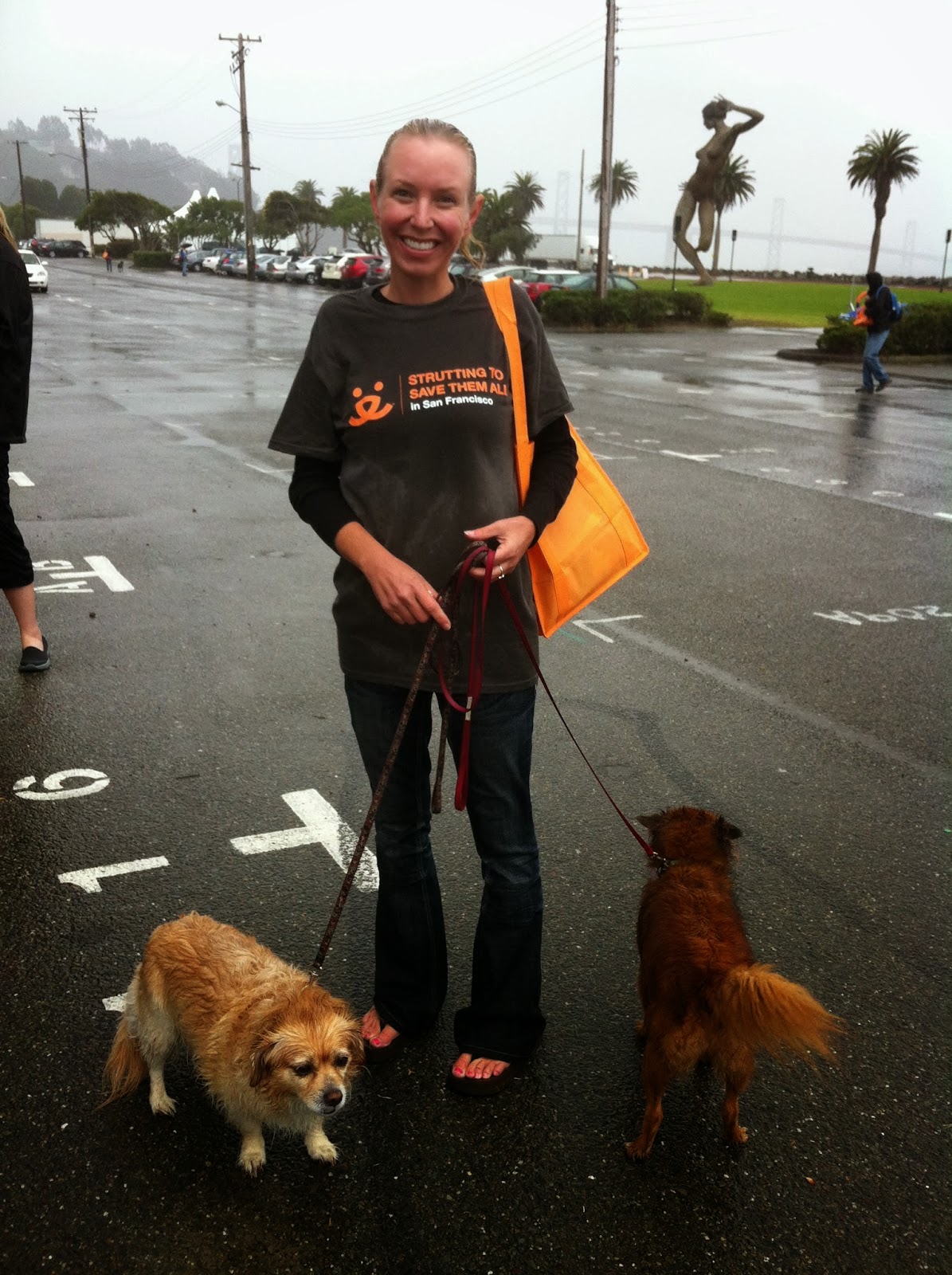 Good friend and longtime Reunion foster Anne with her babies 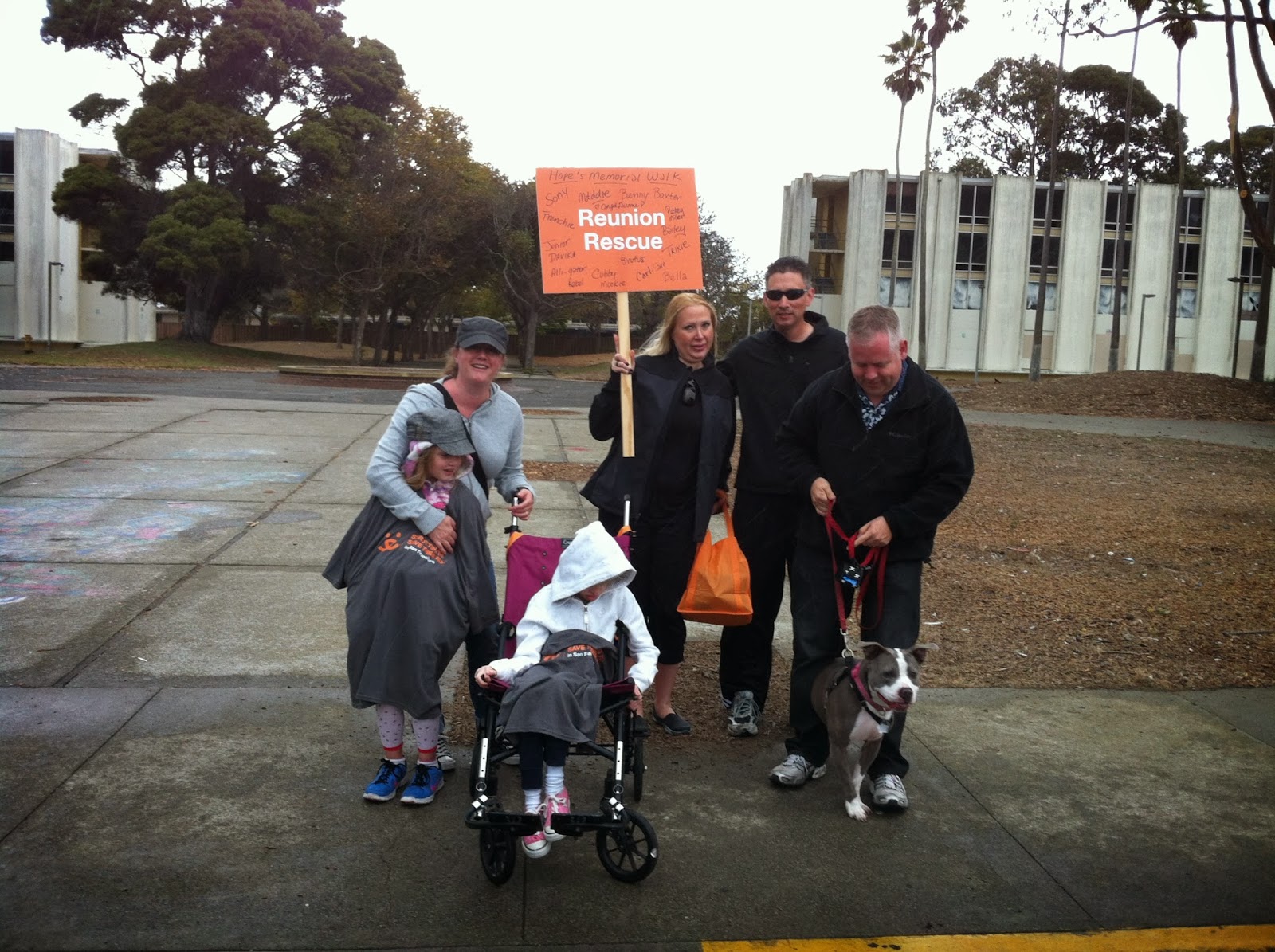 
Posted by Pit Bulls and Other Animals at 5:46 PM 4 comments: 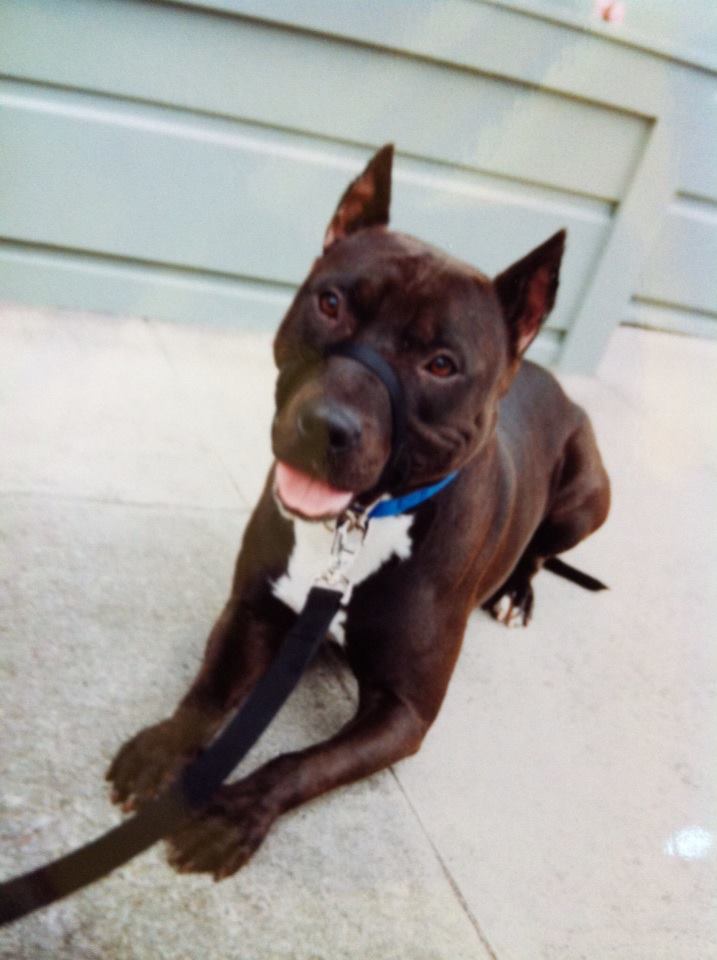 ....and Hank is walking this Saturday for Reunion Rescue Strut Your Mutt. This Saturday, Best Friends is hosting the walk-a-thon for homeless pets from 8 to 1.....

Hank was on death row about to be killed way back in 2002. His dads Jerzy and Norm saved Hank through Reunion Rescue and he's been living the life ever since.

Hank, Jerzy and Norm will be strutting for homeless pets in San Francsico and everywhere this Saturday.

Please consider a small donation or better yet create your own virtual strut page by joining the Reunion Rescue pack and showing the world how wonderful our rescue dogs are!

Please help Reunion Rescue continue our lifesaving work and stay tuned! We will be posting photos and updates until and throughout the event so you can see other seniors and former San Francisco shelter dogs strutting their stuff!

Take a look at some of the strutters on our Facebook Strut Your Mutt San Francisco page:

Tom's Farms bills itself as a "California destination since 1971" has reportedly turned away a young girl with autism and her service dog, a pit bull.

The company's Facebook page  which advertises a restaurant, professional services and an outdoor retreat hosts events to entice traveling families to attend. Currently, tourist attractions include a Civil War reenactment with 'Lincoln' reading the Gettysburg Address.

He won't be reading it to pit bulls, though, because pit bulls, even though certified service animals protected under the same laws as guide dogs for the blind, are not welcome at Tom's Farm.

Although dogs are welcome in certain areas at Tom's Farm, Pup-cake was asked to 'leave the premises.' 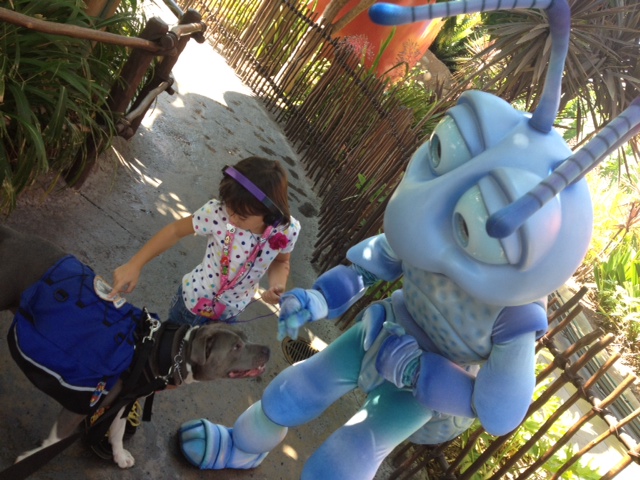 This is a trained service dog and not a danger to anyone, in fact, necessary and legal assistance for his young charge. Pup-cake with painted toenails and his little charge were banned from Tom's Farms.

Pit bull owners are irate and posting on the site's Facebook page. "As the owner of 2 wonderful dogs which happen to be pit bulls I am once again faced with the ignorance of people regarding this breed The poor child's dog was banned simply because of the breed.A service dog is a service dog regardless of the type. Besides breaking the law you are perpetuating the idea that these dogs are inherently dangerous which is simply not true.I would hope you would rethink your decision before this goes further and you are left with a lot of bad publicity."

Tom's Farms might not have heard about the backlash suffered by other businesses over breed specific statements and bans. McDonald's and Farmer's Insurance suffered huge consequences for anti-pit bull remarks. Their endorsements of convicted felon and animal abuser Michael Vick brought Subway and Nike considerable bad press. Kelly Rippa is only one of a few celebrities who've learned that a slip of the tongue can wind up leaving an incredibly bad taste.

Tom's Farms deserves an education about pit bull breeds as do many who issue these unfair bans. Tom's Farms is located in Southern California near over-stressed and very high kill shelters in which pit bulls are being killed by the truckloads daily. BSL such as employed by Tom's Farms kills dogs.

Austin, we got a problem: help for local animals to be cut off 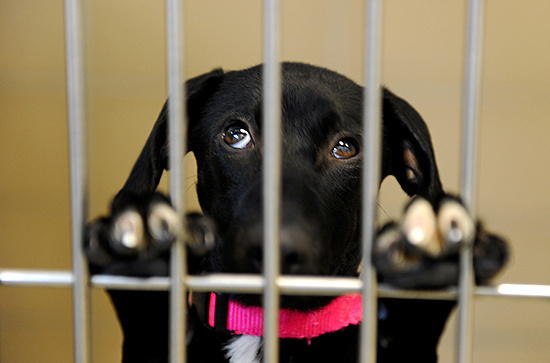 Austin, Texas has turned into a megaplex and has the overwhelming animal problems to show for it. Until now, the communities of Cedar Park, Bee Caves, Westlake, Lakeway, Lago Vista and Sunset Valley have been able to rely on the city of Austin for assistance with stray animal issues and wildlife.

Recently, the director of Austin Animal Services, Abigail Smith has issued a statement that the city of Austin will no longer come to the aid of these smaller less-endowed communities and in fact, will charge a large fee to help with animal related issues.

According to Forbes Magazine, Austin is ranked "among the top cities in the world in 2011 along with two other U.S. metros based on their business-friendliness, affordability and attractiveness to 'millenials' starting and growing their families later this decade."

"People are flocking to Austin to take advantage of companies hiring and the city’s cool reputation. The metro boasts a net migration rate that is the third fastest in the country over the past five years."

That prediction has been proved to be more than true with huge onslaught making Austin, Texas their new home. Austin-based economist Mark Sprague stated 'approximately 158 people were moving to Austin daily! That's 40 some odd families...and their pets.

Many of these incoming families and their dogs will be settling in some of the neighborhoods such as Cedar Park, Westlake, Lago Vista and Sunset Valley which have been duly warned the city of Austin animal control services will only be available at a large cost.

Austin, Texas, known for being one of the most up and coming desirable places to hang your hat, is becoming something other than the city which attracted so many people way too quickly. The huge condominiums alone have altered what was once a unique skyline and now has no resemblance to which was once a true original.

The promise of 'live music every night, movie theaters that sell whiskey, a world-class university' and some of the most mind-boggling terrain in the world with low cost living expenses has placed Austin as '11th largest U.S. city, according to latest Census Bureau estimate.'

What has happened is a spill off of the overwhelming pet problem. Austin Animal Center's new facility is nearly always at capacity. According to Austin Chronicle, "demands of maintaining no-kill status for 17 months have resulted in Animal Services struggling to keep two undersized and overcapacity shelter up and running with the money and manpower needed for one."

This leads to the glaring question, why should the animals in these little communities be punished due to the huge growth enjoyed by the city of Austin? Certainly planners made preparations in transit, energy, utilities, education and other areas of concern. Did they forget about the animals. Kind of looks that way.

Did they assume when Town Lake Shelter was disassembled and the new smaller shelter was constructed way across town on the east side that everyone would forget and the overwhelming animal problem would just go away?
The animal problem is worse than ever with rescue groups struggling to take on more than they can handle to keep animals from being euthanized and allow Austin Animals Services and the group Austin Pets Alive to maintain Austin's no-kill status. And now, these over-stressed rescue groups will take on even more animals to help these little communities without benefit of staff, equipment, funding, transportation and facilities to house the many animals that are showing up not only in Austin, but in Cedar Park, in Sunset Valley, in Westlake Hills, in Lago Vista, in Lakeway and other tiny bedroom communities who didn't ask for this huge growth and who certainly aren't enjoying the benefits.

One sage animal lover says, "Lets talk about the poor rescue groups who now will be more overwhelmed with more calls and more animals because they will be killed after a holding period of three days! My god, I hope your dog does not get out! The rescue groups do everything they can just to survive and Austin now decides to be better then everyone else because of the number game. How many animals can you give away for free game. How many attack the people or their pets Austin gives away because They did not do a behavior assessment, I bet a lot. It's about saving them right?"

Something needs to be done. As the right planning wasn't put into place by the those planners being paid to plan, the job seems to have fallen into the laps of those who aren't pulling down a paycheck or receiving huge grants and funding to care for the overflow of animals when those 158 people and their pets move to Austin each day.

Posted by Pit Bulls and Other Animals at 7:45 AM 1 comment: