How we found LuLu 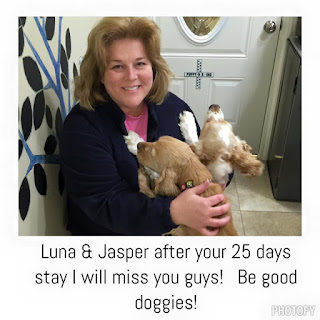 Many of you have heard the bits and pieces while we searched for LuLu over the period May 21 through Saturday, June 20.

The first person on the microchip was a lady by the name of Beverly Phillips who runs a pet resort in Round Rock, Texas.

Three Facebook pages suddenly sprang up claiming LuLu had been 'reunited' with her long lost 'family." 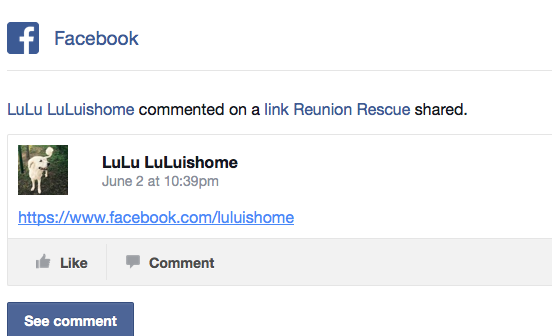 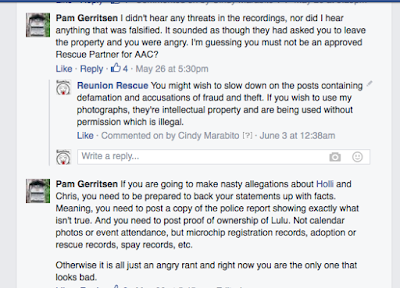 The pages began an immediate programmed attack by posting on Reunion Rescue pages, articles and fundraiser to try and have LuLu returned and questions answered.

Over the next few weeks, Reunion Rescue and Doug Johnson hired an attorney and tried to regain custody of LuLu the correct way, through the courts system. It was expensive and lengthy, but paid off. LuLu was returned June 20, but not before a painful and terrible experience which could easily have been taken care of May 21 and 22 at Austin Animal Center had the shelter simply held the requested meeting between Ms. Phillips and Reunion Rescue. Instead, for no reason, Chris Noble, acting director and Holli Odom called the police and filed a falsified police report against Reunion Rescue.

The attacks carried over to the city's Austin Animal Center Facebook page and the "LuLu is reunited with her family" Facebook page. Californians with an agenda and a grudge began posting accusations of neglect, abuse, theft, violence, insanity and other atrocities. Leading the party was 'Jane Doe' who was revealed to be no other than the daughter of Beverly Phillips.

The two and parties from California and the city of Austin appear to have cooked up quite a story. 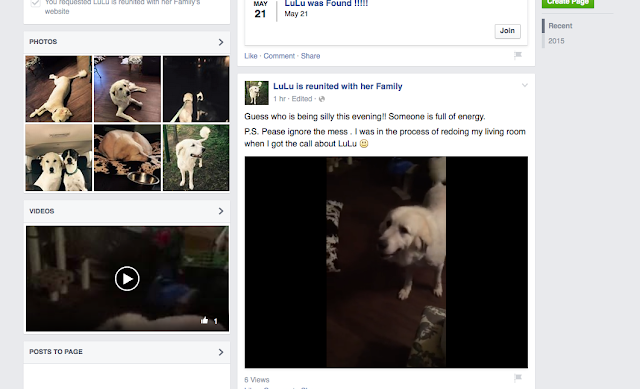 This is a post about redoing the living room the night the 'surpised' and 'long lost' owner got the call about LuLu. 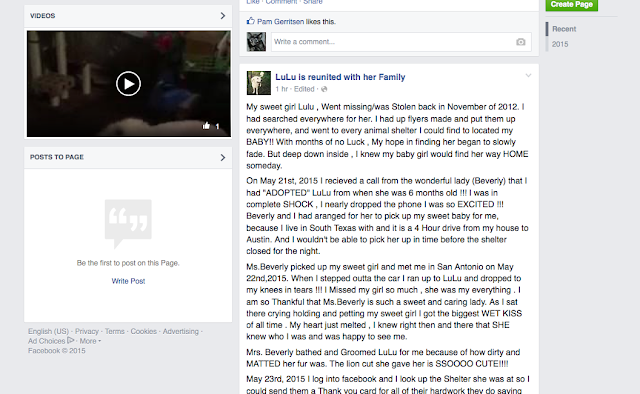 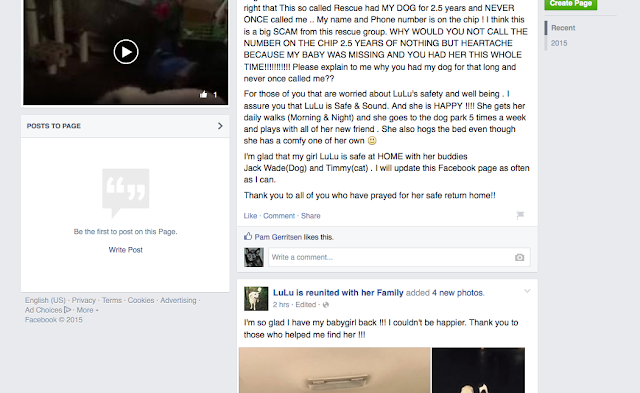 The long lost LuLu story about 'Ms. Beverly' meeting the long lost owner in San Antonio May 22 since the 'long lost' family lives far away in South Texas..four hours from Austin. LuLu had been 'missing/was Stolen back in November of 2012' .. however, 'Jane Doe' had 'searched everywhere for her' and had 'up flyers made and put them up everywhere, and went to every animal shelter' she could find. Hopefully, these animal shelters will be able to produce documentation to back up 'Jane Doe's' claims.

'Jane Doe' continues to post on Reunion Rescue's pages and fundraiser. The story begins to fall apart when 'Jane Doe' is questioned regarding her claims that her name and phone number was on the microchip. 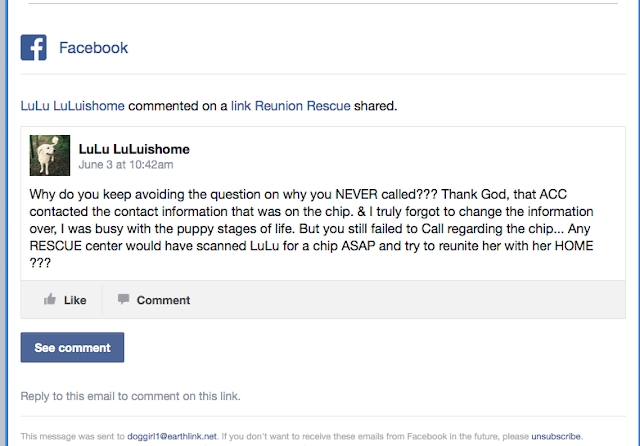 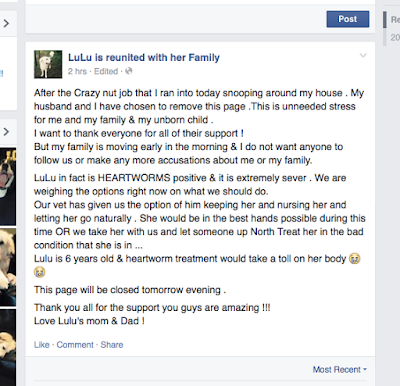 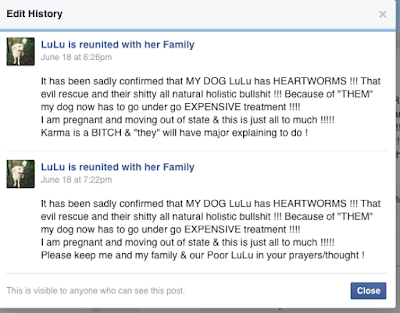 Our attorney had literally worked his butt off managing this complicated situation, moving all the pleadings through the court system, oftentimes on Friday afternoons when these sorts of documents are commonly met with indifference. Pete cared about getting LuLu back to Reunion Rescue and it showed.

After dodging the process server multiple times, the LuLu is reunited with her family page makes a horrible announcement claiming LuLu has 'sever' heartworms. We knew this to be false. A raw fed dog dosed with herbal wormwood will not contract heartworms and more so, not a severe high positive case in a couple of weeks. However, we were terrified the 'Jane Doe' page owners would do something drastic as they felt their story losing credibility.

Compounding the situation were the hate groups from California urging 'LuLu is reunited with her family' to put LuLu out of her misery. LuLu is a five year old dog who's been fed and treated with a healthy diet and support. Would these individuals urge the frightened 'Jane Doe' people to kill a healthy dog simply to further their agenda? Sadly, the answer to that is yes. Late that night, while fearing the worst and reading 'Jane Doe's' posts to 'let LuLu die' and moving to 'North Dakota' and being newly pregnant and not knowing where LuLu was located so that the process server could help us seek the truth in this mountain of untruths, I began looking one more time on the Beverly Phillips and Charles Phillips pages for clues.

I'd been searching for weeks for a dog with the name 'Jack Wade' and a cat named 'Timmy' along with a strange tatoo pictured in the photos on the LuLu is reunited page. I'd 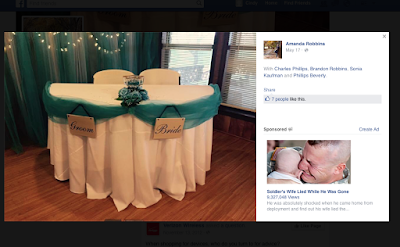 almost given up, but something made me visit Beverly and Charles Phillips pages and their daughter, Amanda Robbins. I noticed something I hadn't seen before, another name, Brandon Robbins.

I clicked on Brandon's name. Doug and I were on the phone comforting one another. It was around 1 a.m. I had been shaking and upset over the heartworm announcements and the many out of state posters 'advising' Jane Doe to put LuLu down.

I scrolled down Brandon's page reading the posts from his future bride, Amanda, Beverly Phillips daughter. I saw one that jumped out at me amid the emoticons and the telltale spacing after sentences followed by multiple exclamation marks...Jane Doe's 'signature' throughout the LuLu is reunited Facebook page and all over my Reunion Rescue and fundraiser pages. I told Doug and our voices rose in excitement. We'd hit paydirt.

I found the first big clue. Jack, the dog and Timmy, the cat! 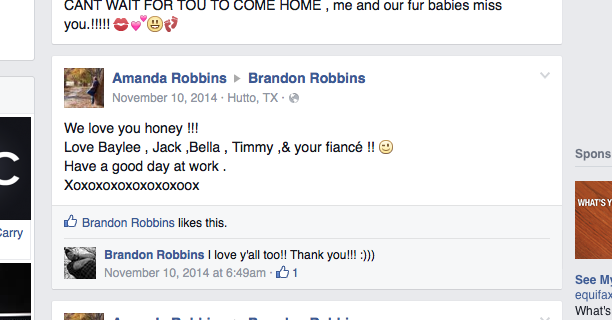 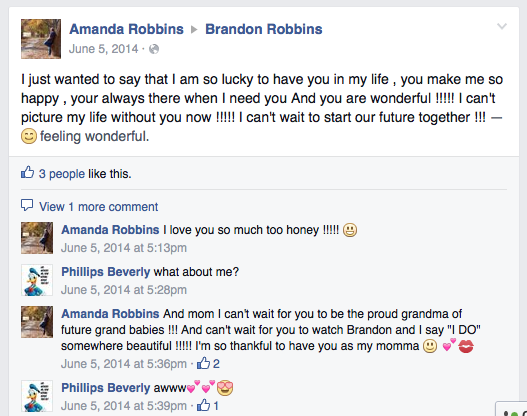 Next was the mother lode.....I'd been searching all month for a picture of the weird tatoo on the arm in the LuLu is reunited with her family photo album and there it was, bigger than Dallas. Brandon Robbins' profile picture wth the Chevy logo emblazened on his right arm. There was no doubt that was the person who had our LuLu! 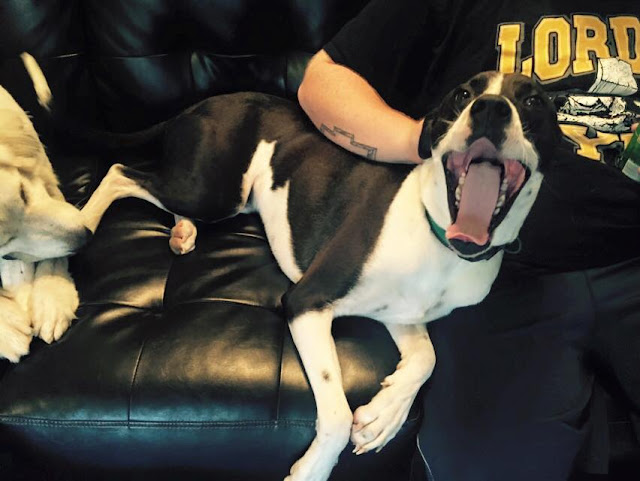 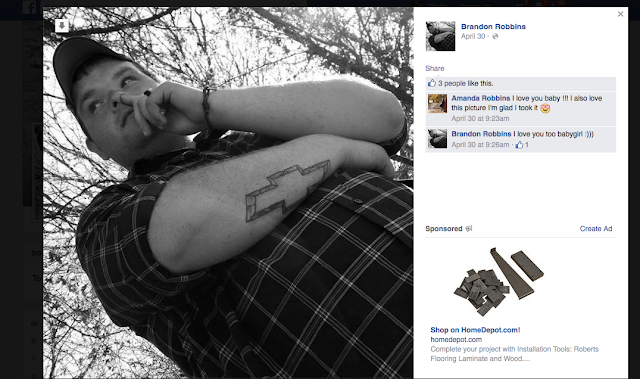 Yahoo! We couldn't wait to call our attorney, Pete and tell him the news. It was 2 in the morning and neither Doug nor myself would be sleeping the rest of the night. To tie a big bow on this package was a photo of Brandon's pick up truck with the Georgetown, Texas registered plates. 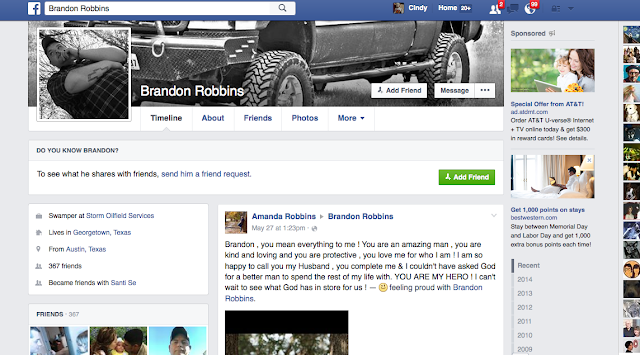 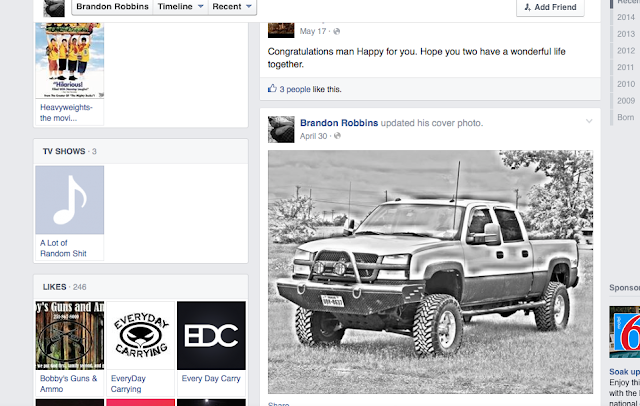 Pete took the evidence to the courts and a very interested judge who signed off on the restraining order. This would prevent Amanda and Brandon Robbins from taking LuLu out of state and doing anything detrimental to her health now that we'd found the location where LuLu was being held.

Our attorney, Pete, jumped into overdrive to find the location where LuLu was being held, yet after another dodge the process server game of cat and mouse, Pete told us to post the notices of Temporary Restraining Orders on Facebook. I posted them everywhere including the Barks a lot Yelp page.

That afternoon, Doug received a call from Beverly Phillips offering us LuLu back if we would remove the Yelp review.

While sticking to the outlandish stories about retired vets in South Texas owning LuLu, pregnancies, moving from South Texas to North Dakota and on and on and on, Phillips promised to deliver LuLu  after finally speaking with our attorney.

So much has happened since our rescue dog, LuLu was taken from us and literally held hostage. The massive effort has been too organized involving the attacks regarding holistic and proven cures for heartworm and other healthy practices at Reunion Rescue. The ties link to hate groups with agendas which have tried to destroy Reunion Rescue for years and have succeeding in killing at least one dog, Rudo, in California.

We have LuLu back, safe and sound, but the fight is long but over. We will continue to search and use the legal means necessary to get to the bottom of this entire sordid affair involving LuLu, our Reunion Rescue dog. Each debunked lie will be revealed and shared with our loyal followers and fellow animal lovers.

Until the next time, here's a happy moment between LuLu and Nolan who discovered each other and big love at Reunion Rescue after each suffered terrible abusive backgrounds. This is what we do, make dogs happy! 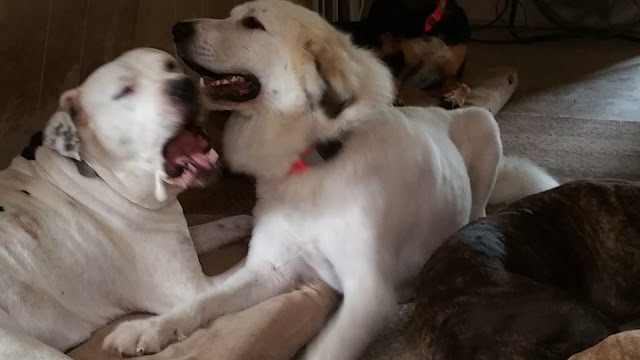 Posted by Pit Bulls and Other Animals at 7:35 PM