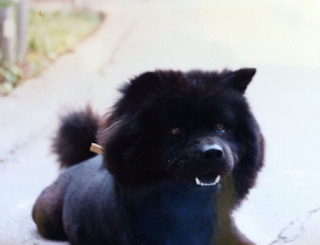 Fu Manchu's story has already been told in Pit Bull Nation. It was a horror tale deluxe. We had just married, myself and Scott and were living on the corner of Homer and Henderson. It was cool little house with gables and a porch swing. We had Roy and Ray, orange tabby brothers. Fu was a big black chow chow who lived on the streets. He'd been turned out by a crack dealer and all the neighbors knew his awful story. Thing about Fu. He just wanted a home and to be loved.
So, enter me and Scott. He had a mess of problems. Matts embedded in his coat. Cherry eye, a weird eye issue where the lid is turned outward and easily corrected with surgery. See, we used a vet on Oak Lawn who took care of the birds and cats. Oh, yeah. We had Buddy by this time. Buddy was a little bitty gray kitten we got at a couple weeks. He was living a hideous life in a crack house and we pulled him out of the dumpster. For extra cash, we were painting the crack house apartment doors green. I think we made $50 for an all day sweltering nasty day slapping that green paint. And, there was little Buddy. He and I were instant friends. He'd start yelping when I moved to the next door, so I'd scoop him up and move him along with me. I don't think he was able to even walk at this point. He was literally on death's door. 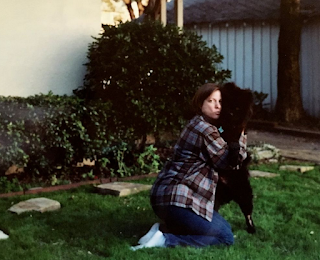 Scott told me on the way home to find Buddy a home. No more pets. Buddy had different plans. He sunk his tiny little claws into Scott's chest like he was scaling a big mountain and mewed. Scott looked down at his pathetic face and said, "I guess you don't have anybody, do you?" From that moment, I knew we had ourselves another cat. Buddy was a real trip. He was his own little cat from the getgo.

Back to Fu. He needed neutering, the cherry eye and all kinds of things, but first, he was infested with heartworms. He had to go through the whole pre-treatment which was very nasty and dangerous. A lot of dogs can't handle the poison from the preventative meds and die. Fu made it through till it was time for the double arsenic injections. He was neutered and the cherry eye fixed. Then, Fu was ready to get on with the life of being a pet.

He had a bunch of skin issues from living on the streets and eating God knows what. We got him on a good diet and I'd take him out on the front porch and brush him down in the evenings after I got home from work. Our favorite song at the time was "Fell on Black Days" by Soundgarden. I'd sing that song to Fu and hug on him for hours. We lived right across the street from Emeralds and Coconuts, a shop that had been there since the 70's. Lulie had a lot of cats, both in the store and roaming. Grey Boy was my favorite. I'd spend hours trying to get him to let me pet him. 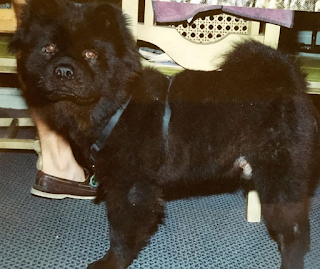 Fu and I would walk all over our neighborhood. From the first day he moved in he was so proud. He wanted everybody to know he belonged to somebody. He had so much love in his heart. How could anyone have ever dumped him to fend for himself? I got him a beautiful purple collar and a matching lease. It was the color of kings and royalty. Fu Manchu was surely that. He was king of the hood with a majestic carriage. You could almost watch him float by.
About that time, we'd begun planning a move to California. We got side jobs to save money. It was around Christmas and Scott hired on part time at UPS to help with holiday shipping. I got a part time job at Lover's Lane Animal Hospital. This was long before I began to mistrust conventional vets. They gave a discount to workers' pets, so I wanted to get Fu's teeth cleaned. On the day of the appointment, I spent three hours giving him a spa treatment. His skin had healed up and I bathed him and brushed out that lustrous fur of his.

The loud speaker came on at the vet and called me to come upstairs immediately where surgery was performed. I knew 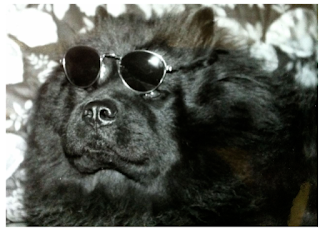 something was wrong. I got to the operating room and there was Fu, dead on their table. They'd given him a huge dose of Sodium Pentathol and killed him. Dead. This dog had been through everything. He'd survived heartworm and the awful treatment to kill them off. He'd survived living on the streets. And, today, this terrible day, killed dead at Lover's Lane Animal Hospital.

We took him home and buried him out in the yard. What happened that day was amazing. Fu had touched so many lives. People started hearing about Fu dying and began coming over to pay their respects. They were still coming when it got dark. Hours later.

We went on and moved to San Francisco after that. My dreams of Fu Manchu and me saving the world were shelved for a while. I'd fantasized about Fu looking for wrongdoing in the animal world and rescuing them like superhero. Like the old school chow chows who once had been bred to guard the tombs. That was what chows did thousands of years ago. I would have to do this on my own. I was very sad about Fu's death. It was so unfair. He wasn't ready to go. But, life had other plans and my world was about to be turned upside down.
Posted by Pit Bulls and Other Animals at 11:36 AM