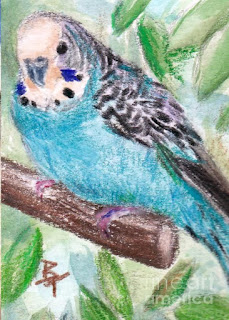 A long period of drug abuse and drinking from Schnuppie to Dallas. That's how many years of misjudging and forgetting I tried to do. I had one dog, Willard during this time. I was around 17 and just starting to experiment with L.S.D. and the like. Willard was another scruffy dog, but I was in no position to be trying to care for another soul. We were a mess in Beaumont, Texas, but that's another book.

Jump to Dallas in 1989. That's the year I sobered up. A friend brought me a bird, a blue parakeet who'd been abandoned. I was finally able to give shelter to a needy other, so Blue Lou came to live with me. We were allies in the storm, he and I. He was a singer and a joyful little soul.
He was with me when I was trying to get sober. I will never forget that. What I found out from Blue Lou was this. Parakeets are over bred to sell in pet stores. They attract many of the wrong types. I've heard lots of sad stories over the years about mistreated birds. I've come to know a few personally. In all this over breeding, most of these birds die a young death and that's what happened to Blue Lou.

He got very weak and sick. Back then, I didn't know much about how to keep animals healthy with a good diet and such things. I've learned a lot since then, but during that time, I was subject to the misinformation you got from vets. I was at their mercy like most uninformed people.

I rushed Blue Lou to the bird hospital in far North Dallas. I was married to my husband, Scott at the time and we lived in a little house on the corner of Homer and Henderson, just east of Central Expressway in mid-Dallas. I rode the bus all the way out to the vet hospital and on the way home with no answers, little Lou died in my arms. I remember sitting out in front of our house. We had a porch swing and I sat there for a long time very sad. I was crying and thinking.
This was a turning point for me. I didn't know what I was going to do, but I knew it was something. The universe had big ideas, though. It always does.
Posted by Pit Bulls and Other Animals at 8:04 AM