"A life for a life, you might call it," as she calls all 'pit bull-type dogs' 'inherently dangerous.'

This from someone who could not have possibly met the hundreds of thousands 'pit bull-type dogs' living with families as cherished pets and canine good citizens.

According to Miranda Devine, "They are responsible for a disproportionately large share of the most
serious dog attacks, and yet politicians continue to bow to the dog lobby. Enough. A dangerous dog is a weapon which can be every bit as lethal as a gun."

Devine suggests a 'buyback' in which she generously offers "an amnesty of a few weeks before the owner of every pit bull, or similar vicious breed, is required to relinquish their dogs to the local council."

So for this one person's tirade, hundreds of thousands of family pets would be mass slaughtered by a stranger, just because Miranda Devine suggested in her column.

"They can then choose a safer breed from the tens of thousands waiting for a new home in pounds and animal shelters. The owner can be recompensed by the taxpayer for the small costs incurred. The dangerous breed is then humanely put to sleep, while a dog on death row is saved."

This sort of senseless breed specific tirade does nothing but sell more papers. My parakeets have something to line the cage, but literally speaking, Miranda Devine's ill thought suggestion is good for nothing else but to catch bird poop. 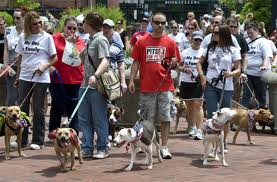 Instead of lashing out at the multitudes who share their lives with bully breeds, why not put that energy into education and outreach? BSL for Dummies exposes the flaws in the system and one city's battle to overturn BSL which cannot and does not work.

Devine engaged controversy when she used a politician's decision to parent a child with a same sex partner arguing "that 2011 riots in England were the result of a "fatherless society" – that is, a society that increasingly accepts children growing up in gay and single mother households." Wow. here's hoping that family didn't adopt a pit bull puppy!

While tragic incidents have occurred which could easily have been prevented, no one is trying to avert change. There is need for great change, but it's been proved to not work through breed specific legislation.

Voice your opinions here and please sign the petition created to let Miranda Devine and Prime Minister Don Page know this sort of maneuver is only an attempt to sell newspapers. Take the pledge to stop Miranda Devine's 'buyback' scheme.

Posted by Pit Bulls and Other Animals at 11:31 AM