Oh, happy day...healing at the Expo in San Antone! 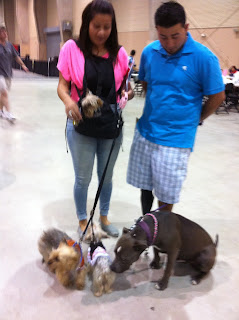 The past two and a half weeks have been pure d hell for Reunion Rescue and tons of others who trusted Leah Purcell's Spindletop ranch with their dogs. Many are dead and others still have not been located. Some probably never will.

Months ago, Reunion had committed to a booth at the San Antonio Pet Expo. It was a great opportunity to share our program with other animal lovers as well as a good venue for my book, Pit Bull Nation. Many of the haters have been attacking me here lately on my style of writing. Hey, I'm guilty! I'm opinionated, blunt and honest, but I know what's worked for these dogs the last fifteen years I've been pulling pit bulls from death row and worse across the US.

There are tons of other style books like sportswriter Jim Gorant's book, the coffee table Lost Dogs as well as the Cesar Millan library. And there's Shorty's tome about an ex-con who landed a tv show. The difference between my writing and others is I'm actually pulling dogs. I'm in the trenches with the network of little rescue groups who are doing the work. 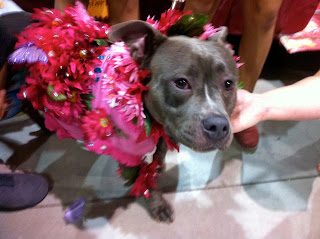 People who read Pit Bull Nation will get an earful of how to treat, train, feed and learn about homeopathy and the harmful effects of vaccines as told in Raspberry's story. It's all sewn together in potboiler form with a behind the scenes expose as to what really goes on behind the doors in a kill shelter and the big rescue corporations who claim in their marketing to save lives, but in reality are the biggest killers of all.

Pit Bull Nation is a journey through hell and the magic formula to walk out with the dog. The Reunion Rescue detox protocol is shared in the book and is being put to the test with the Spindletop dogs we've managed to get to safety.

These dogs are suffering from PTSD and literally must be handled as a dog refugee POW. Mere training will not address the deep seated effects of what these animals went through at Spindletop. Whatever condition in which they arrived at that hellhole has been amplifed and it's our job to decompress these dogs, get their bodies healthy and gently transition back to safe ground.

So yesterday, I'll admit, I was exhausted. I got up at the crack of dawn and treated, watered, pottied and exercised Angel, Amber and Batgirl. I took care of the other fosters and sanctuary dogs, cats and birds, the birds being a handful with homemade diet. I got all my gear loaded into my old car and hit the road. At times like this, I'd probably commit grand larceny for a good volunteer. 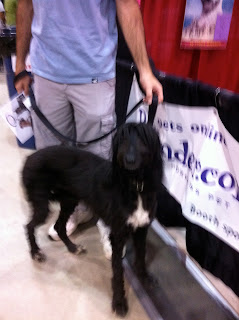 It took me three hours to set up for the event, but I liked what my old booth looked like. I have always loved the vibe in San Antonio and it was carrying me today. I amazingly felt a bit of peace and gratitude. My neighbor down the road from Huntington Beach, Cali made me two righteous signs to help raise awareness and $$ for our Spindletop dogs. I found out the other day Leah Purcell fraudulently pulled dogs under my 501(c)(3) and also trolled my American Pit Bull Examiner articles to fleece kindhearted pledge donators for more cash. I understand she has illegally been pulling under other 501(c)(3) groups as well.

I'd already committed to Feo from Alvin ACC since he'd wound up at Spindletop due to an article I wrote back in December. Was I shocked to find out he was actually pulled under Reunion Rescue. This is further proof that Leah Purcell protected by Zandra Anderson who calls herself the Texas Dog Lawyer (I call her the Texas Dog KILLER's Lawyer) is a liar and a thief. From what I know about law, this is pretty close to fraud.

But, back to getting healthy. I got my booth ready right as people started trickling in. I had a huge stack of cards which I always hand out with our website www.reunionrescue.com full of Nutrition info and training on Junior's Page. I can promise any pet owner if they follow our program they can escape every terrible pet nightmare from fleas to cancer. Where's my controlled study? Right here at the Reunion Rescue No Kill Refuge where everyone lives to a ripe old age and never goes to the vet. You'll never see Hill's Science Diet or Fort Dodge underwriting any study grants at Reunion Rescue.

I met so many people. I met rescues. I hugged other Spindletop refugees and their dogs they'd managed to get back. I met people who cried and haven't found their dogs, dogs that Leah Purcell and Zandra Anderson know the whereabouts of. If that isn't the cruelest aspect of this whole case, I don't know what is. To know where someone's pet is and keep that information secret for a future plea bargain is below low. It's, to me, as low as you can go.

To me, Leah Purcell and Zandra Anderson are worse than Michael Vick. He was a big oaf trying to show off. Not excusing his behavior in the slightest. Am I the only person not wearing Nike's or eating Subway? For someone who professes to be the end all in pit bull rescue and the other making a killing, no pun intended, in legal defense, to deceive hundreds if not thousands of animals and rescuers is beyond evil. To know where those animals are and not help people find them, to have participated in hurting and killing animals for monetary gain on the scale that Purcell and Anderson are involved is monumental in comparison to Vick's crime.

It is my commitment to make certain no one ever forgets what these people have done. When Vick's name is googled, Leah Purcell's nasty face should pop up right alongside with her sidekick Zandra. Those two have been joined at the hip for a long time. Let them continue to be joined. They're welcome to bunk together at Gainesville where they belong and I'll spring for the bus ticket.

Nothing says it better than pictures and I've snapped a few to share from the San Antonio Pet Expo to share. On a humorous note, Shorty Rossi was supposed to be the guest of honor, but Ashley his assistant appeared instead. He's probably busy tending to the four dogs in the Shorti Rossi rescue, the tv show and book tour along with collecting donations. However, a few weeks ago, his people contacted Leah for a photo op. Boy, I bet they're glad she was busy abusing dogs that day. That was a close one.

We had a little drawing for the Bissell carpet cleaner which was won by a rescue group. Katrina Dennis, director of Del Rio, Texas A Pet's Wish won the carpet cleaner.

I left tired, hungry and happy. I met a ton of San Antonio people who love their animals. I had forgotten what it felt like to be in a community of happy pets and their loving owners along with wonderful rescue groups who really do pull cats and dogs, work full time jobs and squeeze in the time to show off their pets at events like this.

Thanks to Jamie, Natasha and the Expo girls, Petsmart for the balls, Petco for the frisbees, Blue Buffalo for the treats and most of all Petfinder for the booth!\

All in all, it was a beautiful day. The good people who love their animals in San Antonio turned out and proved something to this ol' war torn rescuer. It really is a wonderful world..... 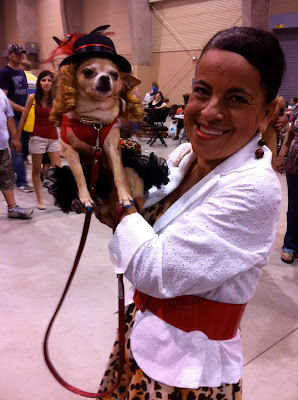 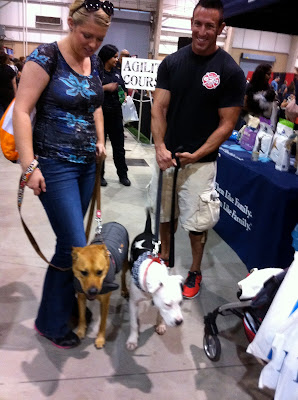 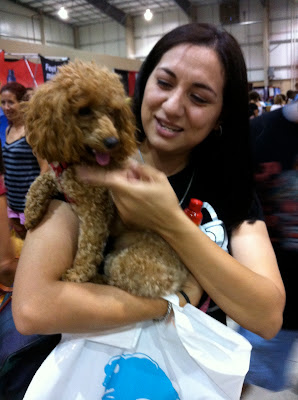 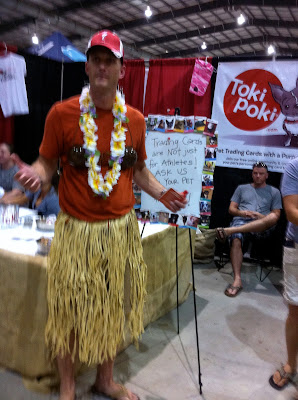 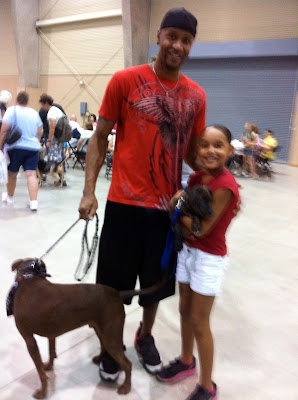 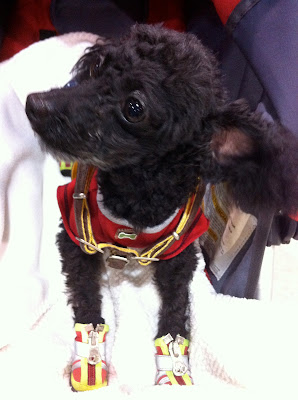 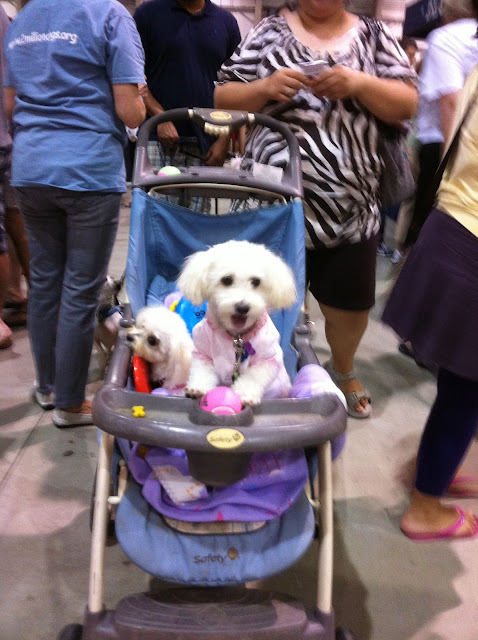 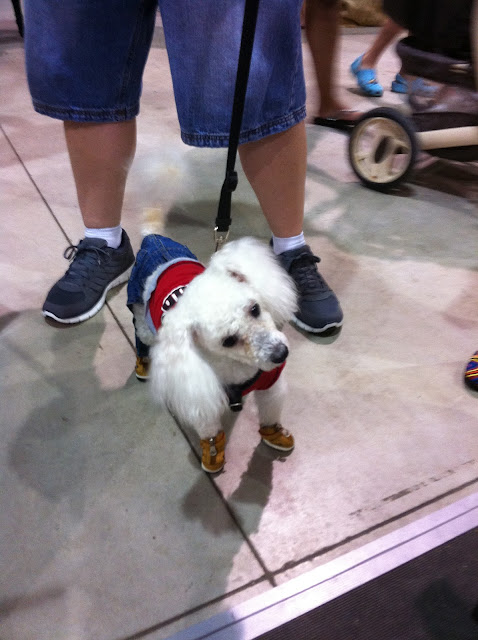 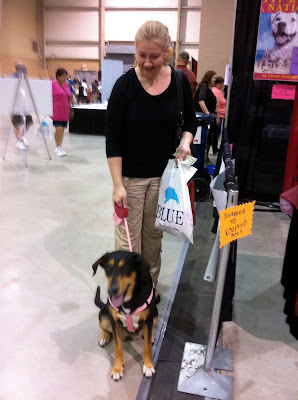 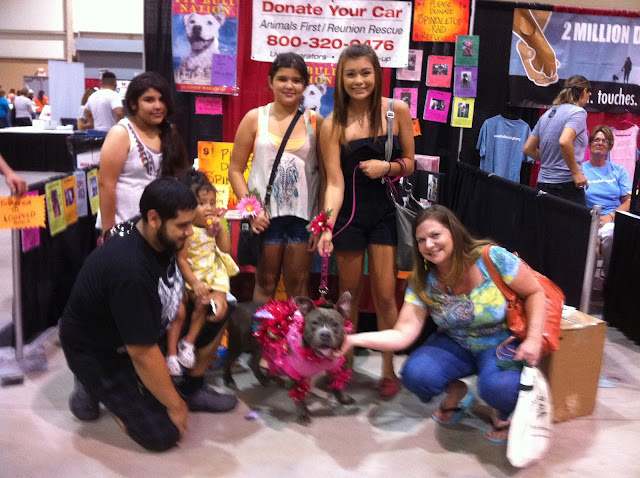 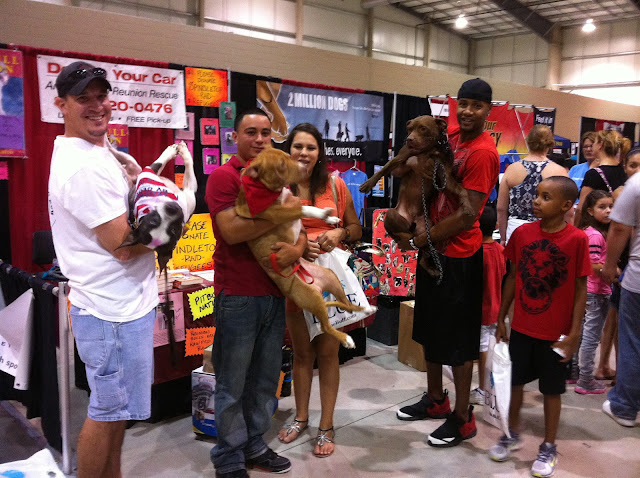 Posted by Pit Bulls and Other Animals at 12:04 PM