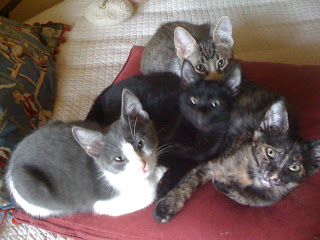 Ok, so we're diehard Game of Thrones watchers. For a little back story, the tortie....far right...is Witch's Toe. Two years ago, five kittens were orphaned by some loser who ran over their mom. The kittens were only a little over three weeks old. In between hard to place foster dogs, I took in the little family.

They had their own house, separate from the main house which holds the actual cat sanctuary. This way, the five could be quarantined and weaned on kitten replacement milk mixed with raw diet.

The only issue the kittens had was flea infestation which was safely cured with edible diatomaceous earth. They truly are the healthiest specimens of life this old rescuer has ever seen. After a month, they combined forces with the elder statesmen and women in the habitat. I couldn't give any of them up, so here they stayed.

Whatever issues the older cats had seemed to mellow out with the advent of these kittens. They rescued us. I was going through a horrible experience in rescue at the time, so these kittens really did save my life. I sent their photos to Clare, the window to the feline alliance. Amazingly, the tortie connected with Clare, telling her, "I've got the witch's toe! I've got the witch's toe!" To date, neither Clare nor myself has the slightest inkling what the definition for 'witch's toe' actually is.

Over the past couple of years, though, her powers of 'toe' have revealed the nature of a very tricky little sorceress. The other night, for instance, she was kicking on the backrest of their recliner when I was about to walk out of the room.  Before I knew it, she reached out and nailed me right in the elbow. It felt like I'd been struck by hot lightening.

She, and the other four, are not mean cats. They are a rowdy lot, very inquisitive, but like Khaleesi's own  dragon children, affairs of the heart. Imagine being gifted with five little cheribs to care for like I have with the kittens. I make certain they are healthy, well fed, nurtured and that no harmful pharmaceuticals will ever come near them. In the state I live in, that's more difficult than busting Khaleesi's dragons out of the city of Qarth. Really.

Witch's Toe, we really call her that is the divine princess. Her sister, Spook, is all black and named for one of my favorite Top Cat characters. Marshmellow was thought to be a girl and called Darcy until we discovered she was indeed a boy when the vet went to fix him. Freddy is a brown tabby with spots just like Marshmellow and the bothersome little brother. Every family has one. Douglas is colored blue and white much like a blue nose pit bull with the attitude to match. He can be a grumple-stiltskin.

On days when I get a bit too stressed from the woes of rescue work, I go into the cat room and feel the love. These sad days when there are so many animals in the overcrowded shelters and not enough homes, I know this one family will never feel pain or anything bad. They will only know the good things life has to offer. These little dragons are safe.

Live Chat Software
Posted by Pit Bulls and Other Animals at 1:28 PM