Daisy was a beautiful coonhound mix at the Austin Animal Center. Thought to be around four, Daisy was offered up to three different adopters and taken back to the shelter three times. Rather than ask what are we doing wrong with this dog and look at her as an individual with individual needs, the shelter killed her. 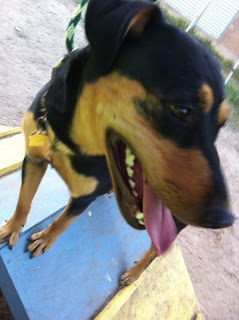 For a week, we have been networking Daisy. I've written two articles about her and crossposted until my finger were numb. She never even had a decent photo taken at the shelter, so the same one has been used in both articles and again in this blog.

Today, Daisy is dead. 'Humanely euthanized' was the term sent out by the rescue coordinator who turned down the only rescue offer for Daisy. No reason was given, but several others have stepped forward with similar experiences at the Austin Animal Center, formerly Town Lake Animal Shelter.

"I called the reference you provided me and told me to contact - that was Paul O Neill with Midland Animal Control.
Based on that conversation, AAC cannot send any animals to your facility."

We telephoned Mr. O'Neill at Midland Animal Control to investigate the reasoning behind Austin Animal Center's decision to not adopt Daisy to Bully Beds of Midland. He simply replied he didn't want them adopting any animals other than 'his'. He then slammed down the phone. Nice guy.

This is wrong on several levels. Primarily, 501(c)(3) non profits are federal entities and speaking as the director of Reunion Rescue, not obligated to operate in a specific region. Unless Mr. O'Neill is serving on the board of directors at Bully Beds, his demands are meaningless. Except for one important item...Daisy is dead thanks to Paul O'Neill and the rescue coordinator at Austin Animal Center.

The shelter has been in the news recently in regards to their attempted no-kill efforts and inability to attain no-kill status. The same rescue coordinator has issued several notices about overcrowding and the shelter being 20 to 30 cages short with euthanasia as the only option. The shelter recently sent a truckload of animals to the notorious Houston SPCA which had to be intercepted and turned around by animal lovers familiar with the Houston SPCA's history of killing tens of thousands of innocent animals.

This shelter is willing to send a cargo of innocent animals to almost certain death, but would rather kill Daisy than allow a loving and capable rescue group save her. Several rescues and citizens have offered similar stories in which animals were killed at the Austin Animal Center for various reasons. One underlying theme seems to dominate each of the stories. Each of these bad experiences was reflective of the shelter's paid staff and rescue coordinator behaving as if the animals were their personal property.

One local offered that the rescue coordinator is 'very careful about approving new rescue partners.' Careful is one thing, but using one's position as a headquarters to dole out living animals to personal preference goes beyond the pay grade.

An internet site provides a keen look at the control freak.

It's difficult for you to trust people.
You make lists for everything in your life.
As much as possible, you need to do everything yourself.
When it comes to social gatherings, you prefer to do the planning.
You rarely think that you're wrong.

These are just a few of the boxes which can be ticked. When animals are dying, because the city has hired a control freak to decide just which rescue groups can join the club, we got a problem...right here in River City.

Daisy was killed not because she was un-adoptable, but because the people in charge at Austin Animal Center refuse to ask for help when making erroneous judgements. They were willing to place Daisy three times in the wrong environment, but due to a personality glitch, would not allow a solid rescue to prepare Daisy for the proper home. That is what rescues do.

If Town Lake or Austin Animal Center does not begin to change, dogs and cats will continue to die. There simply are not enough rescue groups to fit their preferential mold.

We, the taxpayers, are funding individuals to carry out their own personal agendas rather than do their jobs...running a shelter which is attempting to become no-kill.  It takes a village to become no-kill, not just one person running their own show.

We are sick of saying, 'rest in peace,' for dead dogs like Daisy. It's time to wake up and stop the senseless killing.

As this last word was being typed, an urgent email from Town Lake shelter arrived. "AAC is in a space crunch for large AND small dogs today, many small dogs stayed.   If you can come down NOW and empty a kennel, the pups will be so grateful and so will your animal shelter!

AAC is open 11-7 every day and remember there is never a fee for the fabulous AAC rescue partners!"

How many of these animals will die due to personal preferences and popularity contests?

Live Chat Software
Posted by Pit Bulls and Other Animals at 9:03 AM