Batgirl and the long road ahead

Last Tuesday, a rescuer's worst dream came true. Hundreds of people like me found out Spindletop Refuge was being raided. While we waited for news about the dogs people had boarded at the longtime pit bull rescue, photos and stories began to turn up on the internet. 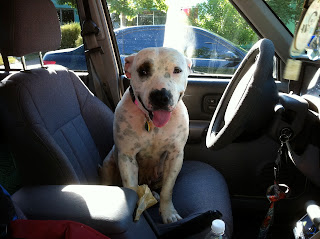 Reunion Rescue had four dogs boarded at Spindletop. Batgirl came from Austin's Town Lake Shelter. I'd adopted her on the night of my birthday last April and drove her to Spindletop the next day after she was spayed and released to my care. Over the next year and some months, I came to know the director of Spindletop, Leah Purcell, very well...or so I thought.

She is a likable soul and I fell hook, line and sinker. In the world of pit bull rescue, one doesn't meet that many people that really get the life. I do this 24/7. I am driven to find out what makes these dogs tick. I wrote in my book, Pit Bull Nation the story of Raspberry who taught me about rabies vaccinosis and how over vaccination causes much illness, disease and behavioral issues. 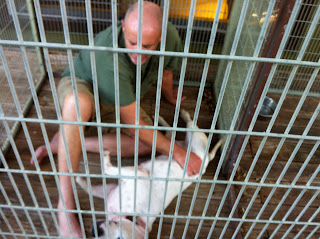 When I delivered Batgirl to Spindletop, she came with her herbal heartworm treatment and Waiora Cellular defense to remove the metals and toxins injected into the body by vaccines. I left a bottle of Emergency ABFE Australian Bush Flower Essence which helps dogs segue through new beginnings with ease.

I took Batgirl to Spindletop because my husband had put the kabosh on any more rescues living with us. It was good, or so I thought.

When I think back today of leaving Batgirl there, I am incredulous. Over the past year and three months, I got to know Leah pretty well. She was always in trouble due to finances, needing a generator, electric bill or phone bill paid, dog food, you name it. I tried to help by writing articles for the American Pit Bull Examiner mentioning Spindletop.

I began to suggest the refuge to others as a place to take dogs from death rows across the U.S. Two dogs, Amber and Stella, were found noosed to a chain link fence last summer in the blistering heat. Stella's ears had been chopped off and dried blood caked the sides of her head.

The wonderful woman who found them contacted me and we put together a chip in to collect enough money to board them at Spindletop. This part is hard to write. I never once got to pet them or meet them. Stella was killed in the Morgan Building from heatstroke with 37 other dogs. That was thought to have occurred June 14 of this year.

When Leah told me Stella had been adopted, I asked her for the adopter's contact info so I could post a photo and happy update on Stella and Amber's Facebook page. The email was down or some such story every time I reminded her about Stella. Angel was another of our dogs who came from Garland Shelter and was taken by our transport to Spindletop.

I placed Stella three times during the year she was at Spindletop. Each time, Leah explained Stella was too aggressive to be adopted. I remember Leah using terms like 'cold' or 'hot' to describe the dogs..dogfighting terms. Now that I look back, I get the feeling that she fancied herself a pundit of sorts. Now that I look back.

What I must do is try to concentrate on getting Batgirl better...lots of grass therapy..the kind you walk on, not the pot. She is back on her herbal heartworm treatment with twice daily doses of Yucca for cough, COQ10 and hawthorne supplement for circulatory. She is dosed several times a day with Rescue Remedy and ABFE Emergency and Slender Rice which supports behavior with flower essences. She is dosed three times a day with Waiora Cellular Defense to remove the rabies virus, mercury, toxins, formaldehyde and other poisons injected into her body through over vaccination upon both impounds.

Last night, I received a call from one of our benefactors who's been fleeced by Leah and camp for several months for over $4 thousand dollars. During one of Leah's rum induced nighttime rants, she was asked how Batgirl's heartworm treatment was working. Leah laughed her cigarette raspy rattle and said she'd thrown it out. "That shit don't work."

As the details unfold around this horrible case, many of us continue to wait as we did in the courtroom. Some have taken to the Facebook pages like Victims of Spindletop Raid to look for their dogs while others without pets involved are delving into a sadder and more loathsome pastime. Several of these posters are attacking those of us who had animals at Leah's Spindletop, more commonly being called "Swindletop". Just when you think you have experienced the lowest of human element, an even more vulgar specimen surfaces.

Some of these people are spitefully attacking those of us who had animals killed at Spindletop and are unsure if the ones we are seeking to redeem are even still alive. For these individuals, if you have even the slightest trace of human decency, please find another hobby. We already feel enough guilt for placing our pets at this hellhole. Nothing you have to say to me or anyone else can make me feel worse that I already do.

I'm going to take Batgirl for a grass therapy session. She's got a little bit of me in her, only she loves all people. Maybe she can give me a little therapy to handle the haters.

Please keep in touch with Batgirl and the rest by following our blog and the American Pit Bull Examiner stories. Look for us on Facebook and help us build the dream at the No Kill Reunion Rescue Refuge...a real refuge.

Batgirl and me...fighting criminals down the line....
Posted by Pit Bulls and Other Animals at 1:10 PM