Raspberry lived with me for over a year. She is the third to last chapter of Pit Bull Nation, the book about my 12 plus years rescuing pit bulls and other animals. In fact, Raspberry's story is significant in that she taught me all about rabies vaccinosis. This has become key to the very core mission of my work and Reunion Rescue itself.

In short, Raspberry was saved by a regular person who worked in the shop where I bought my tea. Brian and his girlfriend fostered Raspberry for three months allowing her to roam freely with their small terrier. Brian would let Raspberry run alongside his bicycle as he rode through town and ending up at the dog park where Raspberry was friendly with every person and dog she met.

When Brian and his girlfriend had to leave for vacation, Raspberry had nowhere to go. I volunteered to let her stay with me as my recent foster dog, Joe, had been adopted. The minute Raspberry settled in, she went into heat.

I scheduled a spay appointment and took her in the next morning. The dog I picked up that afternoon in no way resembled the Raspberry I'd dropped off. She was guarded and skittish. I blamed the surgery and drugs, but that night she went for my husband's face.

I'd never seen such aggression in all my years of rescue. What started that day was a year long trudge to hell and back. To be honest, I probably would have failed to make that journey had I not been finishing Pit Bull Nation.

First, Raspberry had to be quarantined as dogs spayed during the heat cycle still attract intact males. Should the dog be mounted, it can result in death.

She got no exercise that first couple of months. I had several AC, animal communications, performed on her since that first night when she returned from her rabies shot and spay. I learned that she loved the color red and wanted a red collar and blankie. She loved stuffed toys, so I brought all these things home for her. Her excitement that night when I came in the door with those items was sheer delight. It was much like the joy one experiences when their previously kibble fed dog first encounters a raw meal. It's like, 'you get it! You get what I need. Now you know what I'm talking about.'

Raspberry went into a long dillution/succussion homeopathic protocol. This here rabies vaccinosis was some serious and severe stuff. I began to study and what I learned was horrifying. My Nutrition Page on the Reunion Rescue website began to resemble a Dr. Bronner's soap bottle. It became my passion to share this information with other unsuspecting pet owners.

More and more calls and emails began arriving which described not only the same aggressive symptoms as I was experiencing with Raspberry, but about other issues, issues like skin tags and lipoma tumors which are derivative of over-vaccination. I began to read about dogs who were perfect at the shelter or home and then began to exhibit immediate and strange reactions such as obsessive wood chewing or fear of shiny objects. Pip, who's here with me now and took Raspberry's place in the music room, experienced a huge reaction to her vaccines in this regard. She was temporarily fostered to a woman who had a house filled with antique mirrors. Poor Pip about went through the rooftop.

After a year of walking Raspberry in a gated community and the only place I could find which observed leash laws, I began to 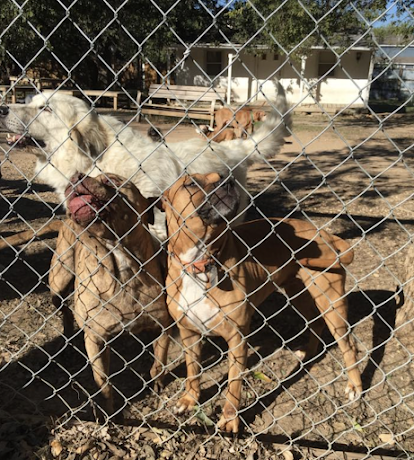 notice the slightest difference. We'd attended three different dog obedience classes including one local extraordinaire which asked us to leave. They were afraid of Raspberry. That group left us $400 poorer, but was responsible for the Kong document on our training page, Junior's Page.

Enter, Linda DesMarais, dog trainer and certified emotion code practitioner. Linda began working with Raspberry with the help of Jayne Athey and her amazing reiki work. What followed afterward is nothing short of a miracle. The story of Raspberry's amazing journey is not only documented in Pit Bull Nation, but in Raspberry's testimonial on Linda's site.

Raspberry and I met Doug, the amazing real life dog whisperer, where the work with Raspberry was put to the test. After the final and main ingredient, Waiora Cellular Defense, was administered, Raspberry passed the human test with Doug and met the fifty some odd dogs at his daycare and boarding facility that Saturday.

The silver lining in Raspberry's story is her adoption by Doug. In the state of Texas, every dog, sick or old, over or even vaccinated only once, must have yearly vaccines. Raspberry was forced to undergo another rabies vaccine, but was immediately put on the Waiora protocol. Thanks to Raspberry, we are reaching out to all those other innocent animals who must undergo horrible vaccines. I recently became a distributor for Waiora, not to make my next million, but in order to buy the product at half price..that's about $11 per dog. To me, to Reunion Rescue and all those other animals we are trying to outreach and help, that is pretty cheap insurance. 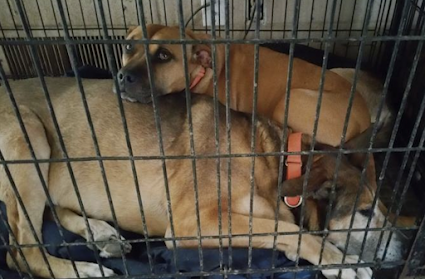 Imagine being able to talk those people who are about to leave their family pet at the shelter and mention our protocol. With a few simple suggestions and a cheap healthy diet, I'm seeing over a 50% success rate in the phone calls and emails I receive on a daily basis from around the country. And all this thanks to Raspberry.

Just like the fruit, a little bit sweet and a little bit tangy, Raspberry has a naughty side. She has figured out a way to wiggle her wiggle butt out of Doug's compound. Raspberry has been sneaking out and taking along some of her daycare friends. Just today, she did it again and talked some poor unsuspecting old boy to run along with her...just like a female, right?

Doug has resolved not to trust Razz again and is hard at work building his new fence which should be in place by summer. Sorry, Razz, but your roaming days are just about over.

Raspberry's and my song...we used to listen to it when we came home from dog training..just her and me against the world ...

Posted by Pit Bulls and Other Animals at 10:59 AM