Nasty sorry vaccination saga goes on and on and on!!! 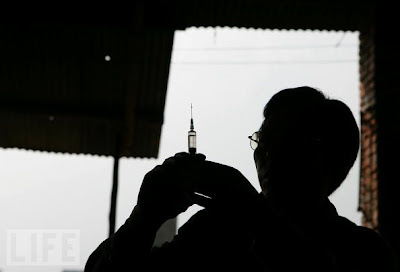 After the Peninsula Humane Society's "veterinary vice president' over vaccinated a dog recently..and knowing Darla had just JUST received a vaccination at Martinez has my panties in a huge wad. Ok, so I wear big panties.

This place, like so many others, is over-vaccinating and over-vaccinating sick dogs. This is wrong and must stop at once. Just because you have a fancy shmancy zip code does NOT give you the right to hurt animals.

Dr. Ronald D. Schultz, Ph.D. "Annual revaccination provides no benefit and may increase the risk for adverse reactions. The percentage of vaccinated animals (those vaccinated only as puppies) protected from clinical disease after challenge with canine distemper virus, canine parvovirus and canine adenovirus in the study was greater than 95%." Current and Future Canine and Feline Vaccination Programs. Dr. Ronald Schultz is a Professor and Chair of the Department of Pathobiological Sciences at the School of Veterinary Medicine, UW-Madison. Schultz, R.D. - Current and Future Canine and Feline Vaccination Programs

This is the same place that REFUSED to do a wellness check on our dog, Arthur, who is suspected of being used for animal experimentations. Ken White, the overpaid director of PHS actually laughed on the phone at my request for a visit to the animal experimenter's home where Arthur was fostered.

Here is a recent Yelp article about a sweet dog who was euthanized due to a ruptured skin tumor!

NOTE: these skin tumors are common among over-vaccinated animals....something all pet owners/guardians should be made aware of as well as so called "humane" societies and shelters. To vaccinate an animal when that animal has received a vaccine within a year is criminal.


I had the worst experience with Veterinarian Renee Fenty on Saturday, March 19, 2011 when I brought my beautiful Border Collie Bernese, Sierra, in due to a ruptured skin tumor on her back which she ruptured rolling on her back.

When the tumor was examined a year ago, the vet I took her to said it appeared to be a lipoma but it was also much smaller then.  Since this vet wasn't open, a friend took us to Veterinary Specialists of the Valley.

My first impression of Fenty wasn't positive.  She was speaking so slowly and her voice was grating.  She showed no emotion when she came back into the examining room to tell me that Sierra is old and she could do an ultrasound and blood workup, but since she hasn't been able to walk for a couple of months, the tumor is cancerous and it has probably spread...ALL SPECULATION WITH NO CONCLUSIVE SCIENTIFIC PROOF THAT TESTS WOULD HAVE PROVIDED.

She said the tumor was necrotic and would have to be removed, but only on the condition that I pay $5,800 or 75% of the $7,800 estimate  up front.  I couldn't believe.  First, I didn't know anything about her or her skills (she has been a vet five years) and her interpersonal skills are sorely lacking, no compassion, empathy or concern for either the pet or pet's guardian. She had the nerve to say when I said, "we can pay the $1,100 for the diagnostic testing," to which she responded,

"I think that would be a waste of money when that money could be used to save a two-month old puppy with parvo who could have a longer life future."

I couldn't believe what I was hearing.  This is my beloved pet you're comparing to a two-month-old puppy with parvo that isn't even in the picture here.  What an unkind thing to say.

Then, my friend called a few rescue friends and told her the vet was saying if we transferred her to another vet for another opinion, the tumor could rupture and Sierra would be in a bad situation (blood poisoning, I guess), so she pressured me to have her euthanized which I reluctantly did and have regretted it ever since Saturday.

I have filed a complaint with the clinic letting the owners know, young vets with less than a decade or more experience need to be coached on how to interact with animals and their parents...her behavior was unconscionable as was the $5,800 demand up front. and the reluctance to perform an aspiration on the tumor, and other tests to see if there was spreading of the cancer she claims Sierra had.

The inability to get up and walk was due to hip dysplasia and she was going to be receiving accupuncture when I was able to afford it. I take full responsibility for my current financial devastation to be unable to pay for all  the medical bills, but I don't think Sierra was given a chance and Fenty actually seemed to enjoy giving her the Propofol to euthanize her.  Look her up at Tufts University and see for yourself a photo of someone who may have personality issues...

I am livid and am going to report this to the CA DVM Board.  I had two previous experiences with "weekend" vets at another clinic.  Tracey Brown and a Dr;  Steed,  In 30 years of adopting animals that were overlooked at a shelter or returned, I suppose three bad experiences can be expected, but veterinarians shouldn't be in that field  if they don't have compassion for the animal and unable to control their personal opinions and bias when dealing with the pet's owner.

Live Chat Software
Posted by Pit Bulls and Other Animals at 1:06 PM