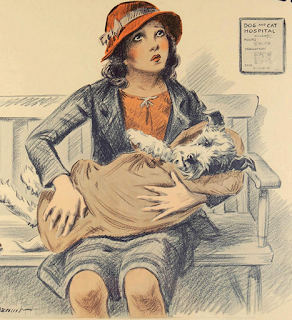 Stern Schnuppie Shooting Star. That was her name. She was that dog. I got her like life does things for you. My mother was a hardcore alcoholic and drug addict in a small town. It was a place where everybody knew everybody's business. It was the 60's and a crazy time when people started to lighten up about drinking a little bit. Seemed like everybody wanted to party. My mother was friends with some of the Beaumont elite and somehow that included the McFaddins. I didn't know them, but then, I never really hung with the rich folks. That was my sister and mother for you. They had a lot of influential running buddies, those two.
Anyway, the McFaddin mansion is a huge draw now in Beaumont and when I see pictures of the place, I think about one thing. I think about Schnuppie. Again, I don't have one picture of her, but can see her so clearly in my mind's eye. She was beautiful. Schnuppie was a pedigree Schnauzer. The McFaddins had two dogs, sisters, they'd purchased from their breeder. That was a lot more prevalent back then, breeding and buying your dog. That was the thing back then. Scnuppie's sister had epilepsy and suffered from extreme seizures, so they decided to give Schuppie up so they could better care for her sister. That is how I wound up with Scnuppie.
Now this. Me getting Scnuppie was an early example to me of how the universe takes care of you by putting lives like mine and Scnuppie's together. I didn't know it at the time, but that scheme of things has become a ruling factor in the way I live. Whenever I start to try and control things, I remember there is a greater plan at work. If I step back and wait, magic things happen. Magic things like Schnuppie. 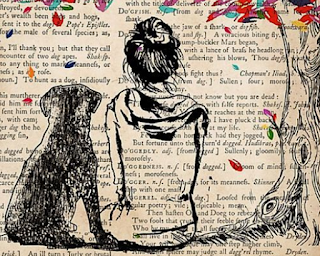 She and I were instant comrades, me and Schnuppie. We were inseparable. Like minds. We went everywhere together. We'd walk up and down Calder Avenue, to town and back. We'd wind ourselves up at Mr. Henry's stand on the viaduct and share a dozen tamales after a long hike. You didn't mind the heat so much back then. We were young and the world was ours, mine and her's.

With Schnuppie, life didn't seem so bad. I didn't mind my mother's drinking and erratic behavior, because I had Scnuppie to care for and her to comfort me. We were soulmates. Even that time my mother came home late at night that time after a long Houston shopping trip and wearing a weird tiger-striped bathing suit with a fishnet vee-plunge down the front. On top of that, she had on a black and white mohair poncho. She picked up a steel baton and told my sister, Schuppie and I she was going to put us all out of our misery and beat us to death.

Now this might seem a little bit strange to a more normal person, but it was every day behavior to the likes of us. The three of us, my sister, Schnuppie and I laid there in our side by side bunk beds of compressed pretend maple and prepared to die. I don't know what changed my mother's mind, but I guess she lost interest and I'm still here. Everything was better with Schnuppie. We loved tv and movies. Books and reading. I'd read out loud to her from my favorite books like Jane Eyre and all those gothic Victoria Holt novels I read over and over. We'd go down to the Obanion's and sit at the magazine rack and read True Confession magazines in the hot lazy afternoons. Both Schnuppie and I had adult taste and we liked a dirty story. 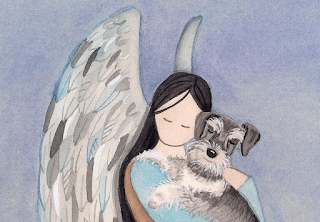 We ended up living across town and I was in high school, my freshman year. Schnuppie got lost at one point and I was lost without her. It went on for about a month and then one day I got this really strong feeling. The universe again. I could feel Schnuppie and looked up. There was a ball of gray down the road and I called her name. Loud. It was Schnuppie and she was running hard and fast to me. She must have jumped about three people-lengths up into my arms. It was one of the best feelings I'd ever experienced. Before or since.

My mother was committed to Rusk State Hospital for the criminally insane. It was Christmas 1969 and we broke her out with the help of my dad, the one who had the new family. I guess he was feeling a little guilty and since it was Christmas and all, he drove the getaway car. My mother had to get out of town and got work in Jackson, Mississippi. We basically cleared out in the middle of the night. My mother told me Schnuppie couldn't go since we were riding the Greyhound to get to Mississippi and they didn't allow dogs. Schnuppie was given to the family who'd been keeping her when she was lost and I never saw her again. I think of her every day. Like I said. She was that dog. I know Schnuppie is up in heaven waiting for me. I can feel her just like I could that day she came running down the street to me. It's another something from the universe for people like me who love animals. On one side, you witness all the horror and the sadness of things people do to animals. But, on the flipside, you get the treasures of life itself and the incredible great beyond. Here's to you, Schnuppie.

Posted by Pit Bulls and Other Animals at 5:50 AM